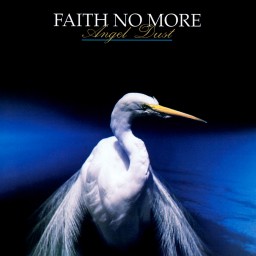 When Angel Dust was released in 1992, I was a 13-year-old ready to move on from big hair and colourful spandex. I was already a fan of Faith No More due to the huge success of The Real Thing (FNMs first album with Mike Patton after they'd parted ways with the charismatic, but technically limited Chuck Mosely). The Real Thing was a breakout album for the band, largely on the back of the single 'Epic.' Whilst it is a great album and one I still return to regularly some 30-years later, Angel Dust is undoubtedly FNMs masterpiece album. This album was a gateway to the more weird and wonderful corners of music and for that, I am forever grateful.

Angel Dust opens with "Land of Sunshine", followed by Caffeine; both written by Mike Patton whilst in the throes of a sleep deprivation experiment. Lyrically, "Land of Sunshine" is a piss-take on a Scientology "personality test", and musically, is driven by Billy Gould's very capable bass-playing.

Track three, and the first single from the album, "Midlife Crisis" is perhaps the song most reminiscent of The Real Thing, containing rapped verses, a catchy chorus and samples galore (and reportedly written about Madonna). The track features samples from Simon and Garfunkel's "Cecilia" and the Beastie Boys, just to prove that even when Faith No More are being kinda normal, they're still being kinda weird. Here though, is the last example of anything "conventional", by the standards of the day (excluding the second single "A Small Victory"). As if to let you know in no uncertain terms that the band has moved on, the next track, "RV" sounds like Tom Waits playing a bitter, overweight, middle-aged, trailer park guy pissed off at a world he doesn't understand anymore. The country and western verses are interrupted with a (dare I say it) "epic" chorus and finishes with the lyrics, "I think it's about time I talked to my kids, I'll just tell 'em what my daddy told me - you ain't ever gonna amount to nothin'." Presumably, FNMs label Warner Brothers thought the same thing when they heard this song.

Track 5, "Smaller and Smaller" is dark and foreboding song that talks of the hopelessness of a farmer against the ravishes of a drought - kind of like a sad Australian country song that doesn't suck. It is darkly grandiose and worthy of your ears.

The next track, "Everything's Ruined" is a standout track for me (in an album I love from start to finish). It shifts seamlessly from bouncy and upbeat open chords, to a dark shift in atmosphere representing a fall from grace. All along, the song is pushed along by another great bass line from Billy Gould and Roddy Bottum's piano and synth. It is worth mentioning at this point that FNMs bespectacled guitarist Jim Martin was becoming detached from the band during the writing and recording of Angel Dust. It is thought that much of the guitar work on the album was performed by Billy Gould, but to what extent is open for speculation. At the time, Martin was dealing with the loss of his father and not in sync with the rest of the band creatively. On this track, however, I can hear Martin's guitar playing shine through. The accompanying video for the song is gloriously low budget, showcasing the band's crass sense of humour (name another music video has reverse footage of a pigeon shitting?).

Track 7 is "Malpractice" - Arguably (along with Jizzlobber) the heaviest song on the album, containing Patton's amazing growls and sledgehammer riffs with the sounds of heavy machinery as a backdrop.

"Kindergarten" is a melancholic song, seemingly about someone who is unable to move on from their childhood. Whilst not a standout track for me, I never skip it.

Track 9 is "Be Aggressive." In my mind, this song could have been a single, but perhaps Warner Brothers weren't keen on asking radio stations to play a song about a man enthusiastically swallowing semen? Puritans. Anyway, even as 13-year-old listening to this album, I was aware that a man screaming "I swallow" had sexual connotations. Keyboardist Roddy Bottum's lyrics about fellatio, introduced with a church organ that leads into a funky bassline, has killer wah-pedal guitar lines, and cheerleaders chanting "Be aggressive, b - e - aggressive", is such a great song that Marylin Manson's single "mObscene" either a) paid homage to the song, or b) blatantly ripped it off. A group of women chanting "Be obscene, Be - Be obscene" like cheerleaders... You be the judge.

Next up is the second single from the album, "A Small Victory." It's an honestly quite sweet-sounding song - a song your mother might not hate. Apparently, Mike Patton's dad was a sports coach and the song is about Patton begrudgingly learning that you can't win 'em all. This song, however, is another winner.

Your mother might not love track 11, "Crack Hitler", due to the title alone. Listening to the song is unlikely to change her mind, either. Your mother is wrong - it's a great track. Billy Gould's slap and pop bass playing is on fine display, the wah pedal is getting a workout whilst the lyrics tell of a drug king pin high on his own sense of importance and power. "Just say yes" to another great song.

Next up is the highly abrasive and supremely disturbing "Jizzlobber." The lyrics suggest some sort of sexual abuse, but it is difficult to tell whether they are from the perspective of the victim or the perpetrator. Whichever the case, unlike another well-known FNM single, which featured on later versions of Angel Dust, "easy" listening Jizzlobber ain't.

Closing out the original pressings of the album, was a cover of the theme song to the 1969 classic film, "Midnight Cowboy," foreshadowing Patton's later tributes to film with his band Fantômas. Like the film, this version of the song isn't a happy ending to the album, but it is beautiful, nonetheless.

In re-issues of the album from 1993 onward, FNMs cover of The Commodores "Easy" closed out Angel Dust. The song was a huge hit in the UK and topped the mainstream charts in Australia. The song showcases Patton's vocal diversity and the accompanying music video, featuring the band hanging around a hotel room with a bunch of bored-looking drag queens, personified the bands irony-laden embrace of cheesiness that would become the norm amongst self-conscious millennial hipsters in the 21st century - Faith No More were a band ahead of their time.

Whilst The Real Thing showcased the band's eclectic embrace of genres, from sleazy lounge music to thrash to Middle Eastern instrumentals, Angel Dust upped the ante and added a substantial dose of avant-garde weirdness to the mix. Entertainment Weekly went so far as to describe it as "probably the most uncommercial follow-up to a hit record ever." Angel Dust, more than any other FNM album, has come to define the contrarian image of the band. With time, Angel Dust has grown in its influence and legacy, and somewhat strangely to my ears, cited as an influence on many nu metal bands. But as Mike Patton once said, "I'm not responsible for those bands - their mothers are" (don’t shoot the messenger). Their influence goes further than that, however, and on the question of whether or not this album fits into the "metal" category, there are elements of this album that are unmistakably metallic, but it isn't just metal. It is, undoubtedly though, a hugely respected and influential album on a number of metal fans and musicians. As evidence of the album’s growing legacy, despite giving the album a lukewarm review upon its release in 1992, in 2003, Kerrang! named Angel Dust the most influential album of ALL TIME, remarkably beating out Black Sabbath's genre-spawning eponymous debut, Nirvana's game-changing Nevermind and Metallica's masterpiece, Master Of Puppets. You can't always trust lists and awards for heavy music (just ask Jethro Tull), but it is nonetheless indicative of the band's enduring legacy in the heavy music world that this album is held in such high esteem.