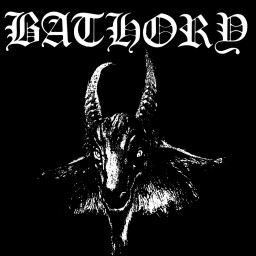 Ah, Ratlord.  Where would we be without thee?

It could be claimed, perhaps - at a push - that we might have had Scandinavian Black Metal without Bathory.  I don't know how that's supposed to work, but I'm sure some bright spark's come up with the idea in the past.

Mayhem's incoherent ramblings notwithstanding, for most of the '80s there was really no-one else performing recognisable "black metal" in Scandinavia.  Bathory come out fully fledged (in a manner of speaking) with this debut record - somehow the production (on CD at least) is even worse than their previous appearance on "Scandinavian Metal Attack." But the production is not so bad as, say, Von or Burzum.  This album sounds like it was recorded in a garage in a chasm in a cave.  In a void.  In a garage.  Some kind of garage-ception going on, anyway.  Tinny guitars - a generally thin sound - but audible bass, drum components can be told apart, the vocals creep in through the mix with reasonable audibility.

To say that this is a "poorly recorded album" would be unfair - it definitely has a budget sound and feeling, and very little has been done in terms of production.  But in comparison to the obnoxious mess that will later become "raw black metal," this is clean like Def Leppard.  Everything is audible - including the mistakes - more importantly, the ATMOSPHERE of the record stays on point all the way through.  Come on.  Do you really want things crystal clear and polished when you're listening to songs called "Necromansy," "Raise the Dead," and "Reaper"?  No, you want it to sound part-rotten, part-gravedust, part-insanity, part-occultism.  Which means murky, obscure, grating, grinding, even brittle.  That's how I'd describe this sound.  In a word: perfect, for what it seeks to achieve.  And, of course, the blueprint for many thousands of albums to follow in subsequent decades...

Musically, this is perhaps one of the least "Scandinavian" black metal records out there.  Bathory would come to pioneer the "Scandinavian approach" to riff-smithing in later albums, most notably Under the Sign of the Black Mark and Blood Fire Death.  The bulk of this debut seems to consist of (nowadays predictable) speed/proto-thrash riffs, drawing heavily from the likes of Venom, Mercyful Fate and Iron Maiden, Saxon, possibly even early Metallica and Slayer if the demo tapes reached Sweden.  But even while one can draw parallels with these other acts, Bathory remains Bathory throughout, even on this debut.  Quorthon could nick pretty much anything from any band and make it his own, contextualise it within the field of his own musical expression.  That's the genius of Bathory, and why this, their most "predictable" record (I have to use quotation marks there, because even for those initiated into black/speed there are surprises on this album), is still a unique and compelling offering.

The drumming on the album is competent.  Mostly d-beat, with the occasional lapse into slower rhythms.  There's no "blast beats," and off the top of my head there's no triplet rhythms (part of the "epic sound" of later, esp. Viking, Bathory).  It's just straight up, punk-influenced speed metal rhythms, if you want to think of it like that.  Not so much to write home about, other than that it's endearing. Perfectly serviceable - can't complain on the drumming front.  Production on drums is maybe not so good, but as above, that kind of works in the album's favour all told.

As for bass playing... Well, it's there.  The bass occupies some slab of low-mids on this record.  If it isn't going through a distortion pedal, the amp's gain is up at 10.  Bass lines usually follow the riff - pretty standard for speed metal - again, not so much to write home about.  Both the bassist and the drummer would quit (or "be quitted from"?) the band following this album, so, perhaps that says what it needs to say.  But as it is, these were the personnel for this debut, and they perform fine enough.

Specifically, the bass and the drums leave a lot of space for...  The guitars.  Quorthon is a good guitarist.  I've heard people debate this, and complain that his "shred style" is more of a mess than it is a masterpiece.  Well, I disagree...  I think he communicates a lot of emotion through his guitar playing, and I think this "chaotic approach" is part of that.  The riffs we've already described - kind of rocky, lots of 4ths being used.  Occasionally those lovely lower-string trills you get in speed/thrash, hammer-on/pull-off legato lines that give it a bit of pizzazz.  The solos are juvenile, sure, but heartfelt, with the rudiments of proper solo structure emerging out of this chaotic "landscape impressionism" approach.  Less musical motif, more emotional resonance...  As above - personally it's a style I like, some might prefer the Kings/Hannemans/Mustaines of the world, with more of an emphasis on... You know.  Notes and scales and such.  But I doubt anyone could claim that the solos on this record don't "fit."

Now, for the vocals...  Again, something I very much love about this record.  Quite at the forefront - and, in the context of the time, one of the earlier applications of this particular style of "singing," if you want to call it that.  Really, it is more growling on this record.  But not a deep death growl - more the growl of a wolf, a mid-range grating.  Lyrics are delivered precisely, often in staccato rhythms, which is not necessarily easy.  There are some rock'n'rollisms, something like ad-libbing from time to time, reminiscent (?) of Dio and such - very well placed here.  Obviously in all regards Quorthon got better as he went on, but considering this is their first full-length outing, the performance on this record is spectacular.  For a debut, this is very professionally done, as far as the performance itself is concerned.  The production is maybe a bit of a distraction on that front...

Now, as for the music itself.  Well, there's a lot of "repeated material," in a way, on this record.  As well as motifs, rhythms, and styles which are reprised on later records.  But I tend to judge these things "as they were at the time," so, in the context of no other Bathory material - well, this is pretty robust, in terms of composition.  There are the fast songs, dominating much of the album's playing time, which all revolve around various applications of speed metal style - albeit with an emphasis on keys and modes that feel "dark" and "evil," something Venom were still getting to grips with two albums into their own career.  Here it's full-fledged from the get go (presumably as a result of listening to Venom records!).  These faster tracks all work together - I'm sure they could be strung into one song and people wouldn't necessarily notice.  Good, working speed-metal fare.

And then there are the slow songs, which everybody knows end up being the most memorable ones (because they have longer to impress themselves on the mind!).  And these are really good on this album, definitely the beginnings of what will later be recognisable "Epic Bathory."  Raise the Dead is echoed in Call From the Grave (much as it is in itself an echo of the Venom track "Buried Alive"), and Necromansy is a comfortable mid-paced track, very interesting modulation between the verse/pre-chorus riffs.  Say what you will about production, playing, even vocals... Musically, this is a robust record.  Lots of internal relationship, thematic evolution through the record, the sense of a consolidated and considered ethos/intent expressed consistently through these songs.  They knew what they were going for.  It doesn't get much better than this, except when artists expand their palettes (and the lengths of their albums) - which is exactly what Bathory did over subsequent releases.

All in all, I'm giving it 4.5/5.  The .5 is docked because, personally - sacrilege, I know - the intro is way too long.  I often listen to music while out and about doing things, so it's not so engaging for me to listen to three minutes of intro!  But, it is a classic in its own right, and deserves its place on the record (and all the other records....  Talk about thematic consistency).  Without the intro, this might be the best early black metal EP out there.  As it is, it's one of the best early black metal (mini-) LPs, and absolutely required listening for anyone interested in learning about (never mind writing) black metal as a whole.  Say what you will about Venom - they might have bagged the name and the basic premise - Bathory was the band that really developed the sound, sense, ethos, atmosphere of the genre.  This record was absolutely necessary for pretty much everything we enjoy from '90s Norway/Sweden.  So, for that alone, it's a top record in my view.

If I can make any recommendations - pay through the nose to get an original vinyl, or use occult secret tech-techniques to download the vinyl rip from youtube or some other streaming service.  The CD rips are not so good, sound-wise!  Easy to compare on youtube, you'll see what I mean.