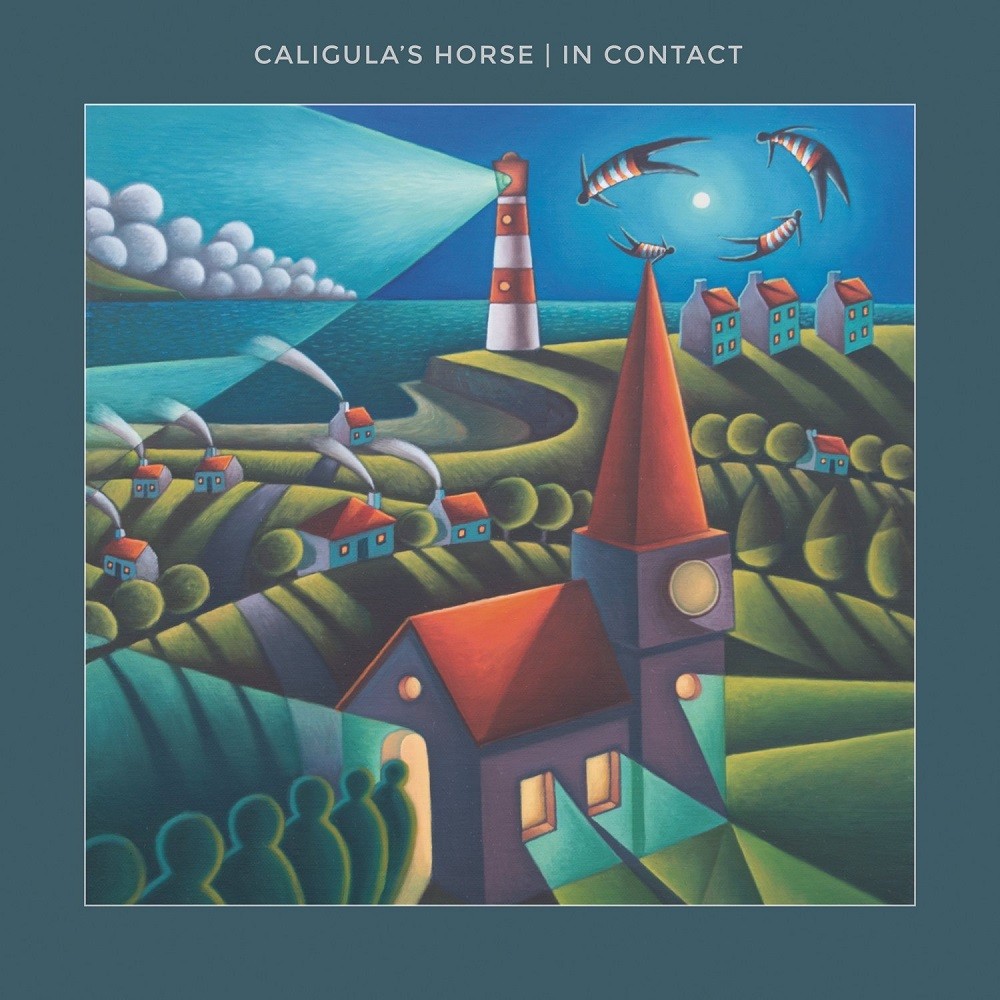 OK, this band, Caligula's Horse, I haven't heard yet. But it seems like a band that has the melodic progressive metal taste that I'm trying to abandon to make way for the more extreme kind. The melodic fans of bands like the recent Leprous, Threshold, and Pain of Salvation might catch a familiar scent with this band. This part of the challenge should be memorably interesting. In Contact is delivered as a soaring elaborate melodic prog metal album!

The mood is both uplifting and melancholic, and overall really colorful, much like the cover art, which is one of the most beautiful metal album covers I've ever seen. This is where the hard work of vocals by frontman Jim Grey pays off. His voice really ranges a lot, from dramatically high with soaring controllable falsetto to ominously low with a clean but sad feeling. He sounds like Leprous' Einar Solberg but a little more restrained. And even though he clearly does NOT do the heavier vocals like the other bands I currently listen to, the lyrics are the heavier part with heartfelt poetry, especially in a spoken poem track later on...

First things first, "Dream the Dead" an excellent 8-minute opener that sounds a bit like if Plini joined Dream Theater. In fact, the structure sounds almost similar to the one in the Dream Theater hit "Pull Me Under". Next track "Will's Song (Let the Colours Run)" lets the band's heavy colors run wild. "Hands are the Hardest" is NOT the hardest, being more melodic than the previous two tracks. "Love Conquers All" is a bit too annoying to like, but thank greatness that's only a two-minute interlude/ballad.

The true highlight, "Songs for No One" is a song for anyone who's into progressive rock/metal. It's an 8-minute heavy blast of hooks and riffs! The last minute and a half with the final bridge and guitar solo is just FANTASTIC. "Capulet" is another short relaxing ballad. NOT the best, but works as a soft intermission in the play of heaviness. "Fill My Heart" begins with its first half being a little annoying in its attempt, but the second half is much better and heavier! "Inertia and the Weapon of the Wall" is just a 3-minute spoken interlude! At the same time as I think "WT*?!", I also realize that it's delivered well without interrupting the album flow.

That interlude was a prelude to "The Cannon's Mouth" which is another cool 6-minute song that sounds like Plini collaborating with Einar Solberg. All doubts are washed away with the stunning 4-part 15-minute finale, "Graves". After starting with a quiet guitar melody, the melody evolves into something epic building up in the first half of the suite, with more intensity coming along the way. The third part really shines with the softness broken by Grey's acrobatic vocal melodies surrounded by superb soloing. The absolute best riff of the album is saved for last when there's 3 minutes left in the song. Then after calming down for a little bit, the riff appears again with background gang vocals and saxophone, surprisingly. An epic erupting finale of grand-mastery!

Something notably different that Caligula's Horse has compared to other progressive bands is the excelling vocal/guitar interplay. Sure they don't focus on rhythm as much as Leprous, but they play their own unique distinct way. Despite the softer elements not gripping well for me, In Contact has so many things for a progressive fan to love; catchy songs with great vocals, awesome guitars, and well-written lyrical thoughts. A magical album to jump in, as Caligula rides his horse into the sunset....