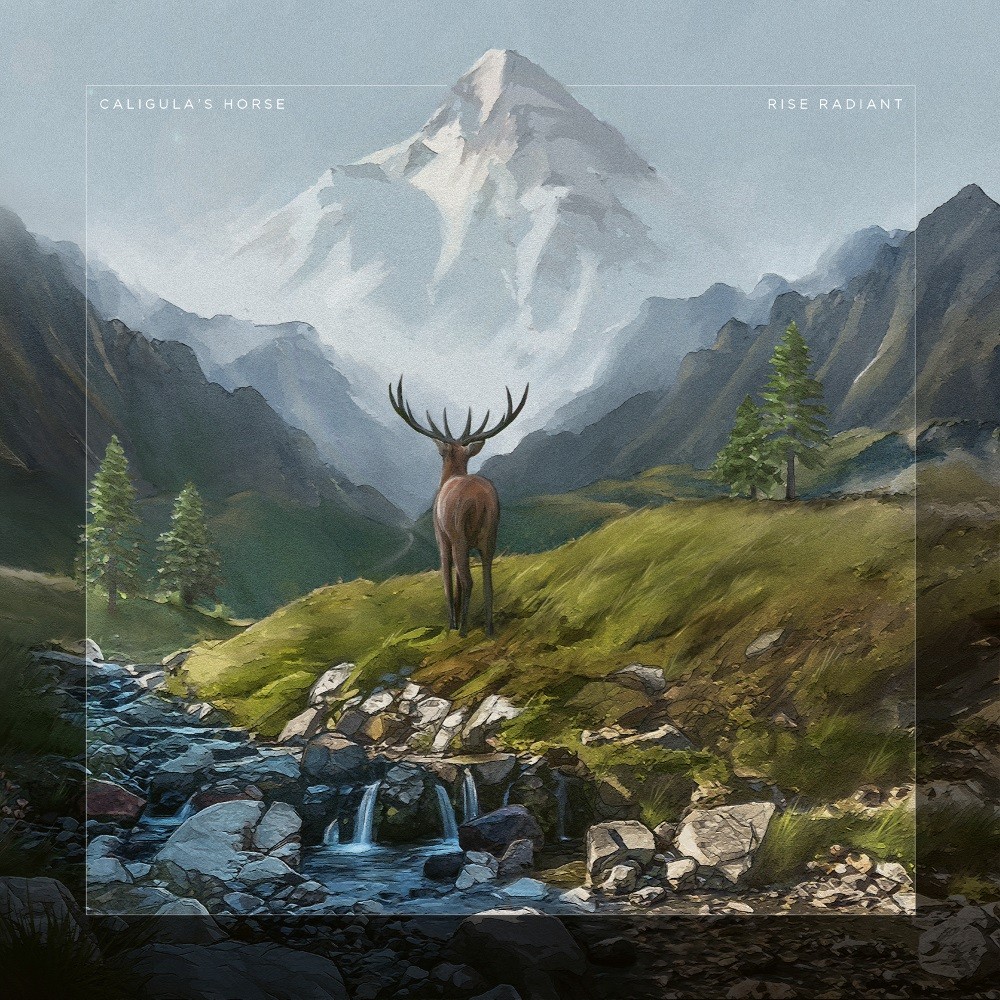 The new record from Australian progressive metal band, Caligula’s Horse is here and I enjoy what I heard here. However, it is worth noting that this band does seem to be falling into a formula and it does have me worried about their future.

For starters, this album does sound excellent. The mixing is very strong; the low end is very prominent throughout, allowing for the guitars, vocals and additional harmonic/melodic instruments to soar with a lot of power and precision. From a songwriting perspective, Caligula’s Horse are one of a handful of groups that have managed to incorporate djent breakdowns without losing hooks, and that is prominent here on “Slow Violence” and “Autumn”.

But I quickly realized that, while the hooks are nice, they do lack the immediacy of In Contact. This album also suffers from having a very similar formula to that record as well. The shorter tracks have better thought out song structures, while the closing track “The Ascent” is nearly eleven minutes, when it could have been easily broken up into three or four separate ideas. In short, they are not connected together very well.

Throw on top of that two bonus covers that are even more flushed out than the best tunes on the album and you get an interesting listen. Probably my least favourite release by Caligula’s Horse so far, but still enjoyable. They still have a unique sound that separates them from many of their contemporaries in modern progressive metal. I’m just worried about their artistic future.

Cracks In The Stone

Australian Progressive Metal band Caligula's Horse has been on my radar for quite some time and they have proven to be quite the rising stars in the Progressive Metal world. While neither the most progressive or most metal, their complex and full sounding songwriting coupled with poetic lyrics and vocals as well as a knack for memorable moments and choruses have made them extremely accessible without having to sacrifice much intricacy. While their 2011 debut album Moments From Ephemeral City was a bit rough around the edges, it paved the way for 3 incredible releases over the following 6 years, each one expanding on their sound and showing that the band was always willing to explore and try to refine themselves. Even though Caligula's Horse doesn't have the most variety in the world, their softer progressive musings with interesting vocal passages coupled with dropped, djent-y riffs has proven to be a winning combination on The Tide, the Thief & River's End as well as the more polished Bloom. In Contact saw the band stray farther down the progressive end of their music, putting more emphasis on complex songwriting and theatrics compared to Bloom's relatively straightforward approach. The addition of more acoustic sections and slower ballads plus a three minute dramatic poetry reading was hit or miss for some and cast some doubt on the band's direction moving forward if they were to lean even more into those elements. Thankfully Rise Radiant forges yet another slightly different path for Caligula's Horse and doesn't compound on the iffy elements present on In Contact, but the path it takes may have been a little too safe in the end.

Rise Radiant is absolutely another Caligula's Horse album, with all of the elements that have defined their music in the past still present. The overall production and what the band chooses to focus on has shifted a bit though, with more emphasis being put on smooth and less fragmented songwriting while losing some of the power behind the dropped chugging chords. In terms of composition I truly believe that this is Caligula's Horse's strongest album, with every track having tons of complexity and layered melodies that always seem to mesh together impressively. Whereas Bloom and In Contact could feel a bit aimless in their time signature, tempo, and dynamic changes, Rise Radiant is smooth as silk when it comes to creating a cohesive experience. Everything feels like it fits together more than your average Progressive Metal album, with the transitions in less riff-based songs like "Salt" and "Autumn" being masterful and overall more musical than their previous longer songs like "Dream the Dead" off of In Contact. The riffs and backing guitar parts throughout Rise Radiant are more intricate than ever, with "Valkyrie" and "Slow Violence" having extremely memorable ones that are able to carry slightly weaker chorus sections. The album overall seems to be going for a more heavenly and nicer sound that's more akin to Bloom, since In Contact had a darker edge in the chugs and especially in the vocal delivery.

This time around the vocalist is really fond of using a more spoken word delivery rather than the constant high notes he used on In Contact, which is both a blessing and a curse in this case. The more subdued vocal style works wonders on "Salt" and "Autumn" to create a more endearing and emotional atmosphere to crescendo into the choruses, but when it's used repeatedly in more upbeat tracks like "Slow Violence" or "Oceanrise" it gets a little tiresome and comes off as a bit bland rather than emotional. The overblown and poetic vocal style is still intact though, with Caligula's Horse always having been fantastic about writing lyrics that flow extremely smoothly. There's a surprising amount of softer and subdued parts that are meant to highlight the vocals as well, allowing their inner wordsmith to shine through. While the meanings and themes of Rise Radiant are a bit less apparent than something like "Graves" from In Contact, I think it sells the somewhat overused atmosphere of reflection and self-meaning well enough.

There's a bit more experimentation in the guitar riffs as well, with the album starting off with an awesome tremolo intro for "The Tempest" as well as some fantastic layered melodies on "Valkyrie". While the guitars may not hit as hard as they did in previous albums, there's a mature sort of complexity going on with everything sounding like it fits together perfectly. All of the transitions are on point as well, which is always one of the most important aspects of creating great moments in an album. The build from "Autumn" into "The Ascent" is seamless and makes me wish that the entire album had more moments like that. There are so many little details in every song that I'm still picking up on, even on weaker tracks like "Resonate". Even though Rise Radiant lacks a bit of the punch that their previous albums had, I do think that this set of songs has their best songwriting overall just in terms of complexity, cohesiveness, and variety of riffs. It's incredible how much they're able to fit in to such a small space, fitting in a ton of progressive metal elements into a compact four to five minute package rather than the normal eight or nine.

With this constant talk of strong and connected songwriting, there's always one thing you give up when you focus too much on those sorts of aspects. Rise Radiant's biggest downfall is that it is almost completely devoid of massive or memorable moments, even though so much of the album is stellar. Although the riffs of "Valkyrie", or the transition to "The Ascent", or the emotional vocal performance of "Salt" can be memorable, there are next to no attention grabbing or intense moments like their previous albums had. The huge moments like "hands shape stone" in "Graves" or "pray for rust" in "Rust" are just completely missing in Rise Radiant, leaving me wanting so much more out of this album than what it gave me. It's frustrating because in tracks like "Salt" and "The Ascent" the buildups are there, the moment is right, and then the song climaxes into a flurry of normalcy that just doesn't hit as hard as it needs to. I was begging for "The Ascent" to do something crazy after the amazing build towards the end of the song, but nothing ever came.

While Caligula's Horse hasn't released a lackluster album with Rise Radiant, I can't help but think what it could have been if the band didn't lose some of their punch. The mellowed out production of the guitar tones doesn't help, but it just feels like none of the songs reached their fullest potential. It's a strange conundrum since I do believe that this is some of their best material to date, with even the two bonus tracks being fun and beautiful additions, but it's definitely missing some spice. "The Ascent" doesn't even come close to "Graves" in terms of an album closer and while the rest of the tracks are incredibly strong they don't stand out in the same way as some of their previous songs did. Rise Radiant feels like the first "safe" Caligula's Horse album and they're incredibly fortunate that their formula is able to pull it off extremely well, even though it lacks impact.