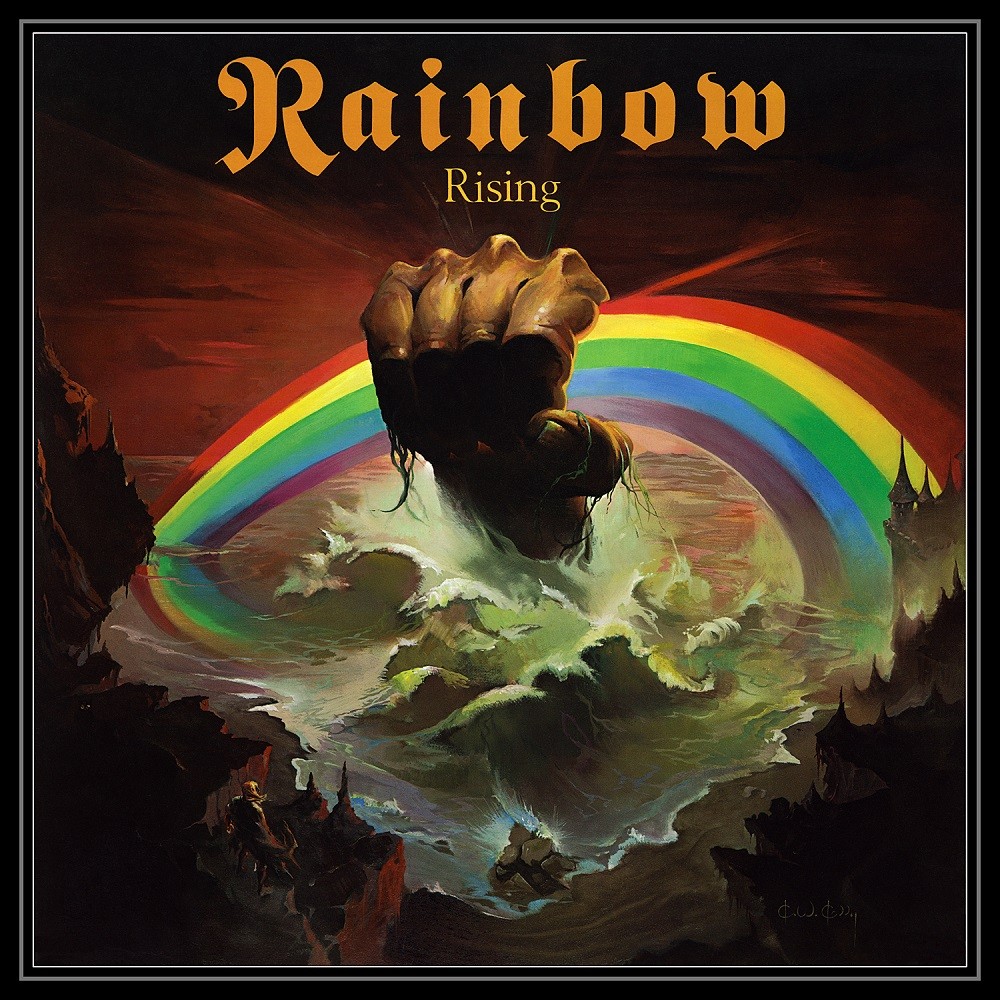 This is perhaps one of the most succinct records in any genre of metal/hard rock.  At only six tracks in length and just over thirty minutes total run time, Rising does well to get its message across so impressively in such a short run time.  Opening track Tarot Woman probably showcases this ethos best of all the tracks on the record, with its galloping rhythm and melodic keys balanced against a catchy lyric sheet across a track that adds psychedelic tinges to embellish the very mystery of the lady in the song.  It is equal amounts classic Dio and Blackmore encapsulated in six minutes of well written hard rock.

Second track, Run With The Wolf  keeps the pace up nicely adding a more metal feel to proceedings as Dio applies his trademark grittyness to his vocal delivery, he seems to control the tempo of the track all by himself like some metal composer arranging his symphony around him.  The insanely catchy Starstruck soon follows with an almost cabaret beat that sees Blackmore firing licks left, right and centre over a rampant rhythm section.

The cheeky Do You Close Your Eyes continues the showy performance with its big chorus line constituted of the somewhat clumsy lyrics that Dio somehow still manages to make an impressive job of delivering.  By far the most impressive of the tracks on the album is Stargazer with a slow to mid-tempo soaring on warm uplifts from Carey's keys that give Blackmore's riffs a floating feeling, his eastern promise sliding lead work giving an added depth to an already lush and vibrant track.

Album closer A Light in the Black stands things down nicely being the second eight minute plus track that made up side B of the vinyl format.  This is a racey number to end on and works really well, letting things go out on an uptempo high instead of a brooding ballad.  This was Rainbow in their prime most definitely and it shows on this record.

Rainbow may not be the first name that comes to mind when discussing 70s metal but I believe Rising cetainly stands as one of the best metal albums of the decade. Let's face it, how can any album that features Ronnie James Dio not be considered metal, the guys a metal legend and, in my opinion, this is also Ritchie Blackmore's finest hour, even eclipsing his work with Deep Purple. Side one features four anthemic numbers including the classic Starstruck and great opener Tarot Woman, but the album really shifts up a gear on side two that features only two tracks, the epic Stargazer and my personal favourite A Light in the Black. Stargazer is an early precursor of epic doom, with it's tale of a megalomaniac sorcerer compelling slaves to build a tower to the heavens and is probably stolen by Dio's amazing vocal performance, but Blackmore holds his own with some great soloing. However, Ritchie really lays it out on Light in the Black, with a fast and frenetic performance that helped influence countless thousands of metal "shredders" for decades to come. Finally, I have to tip a nod to Cozy Powell's thunderous contribution, hammering his drum kit into submission in a way few could ever replicate. Rainbow went into a steep, terminal decline after this record, mainly due to Blackmore's desire to emulate David Coverdale and score Top Ten hits in the US, but this stands as a fitting monument to a short-lived partnership of amazingly talented musicians at the top of their game.

It took me a long time to get around to listening to Rainbow's Rising. Don't make my mistake: listen to it. Listen to it again if you already have. Listen to it while you read this. Because if you're any kind of fan of rock 'n' roll or heavy music, you will enjoy it. It's simply that good.

It's hard to properly convey just how superbly crafted Rising is in words, as a reviewer I forever want to stick the album on and say "See?" to the reader. It doesn't necessarily break any boundaries, it just makes everything work so well. One of the most striking aspects, and as good a place to start as any, is how the album is so startlingly devoid of filler or fat in any form. Not a moment is wasted, every track is an absolute belter, and every part of each works. It's just six tracks of pure rocking brilliance.

Ronnie James Dio and Ritchie Blackmore is a match made in heaven, with Dio's gorgeous vocals and Blackmore's fantastic guitar work sitting side by side. Just listen to the way they play off each other to make "Lady Starstruck" so insanely catch, both shining and complementing one another. Or the crazy fun that is "A Light in the Black", which demands that you nod your head, tap your foot and sing along with Ronnie that you're "coming hoooome!". Then it treats you to some of the most succulent keyboard and guitar soloing to be had.

The song-writing on show here is fun and catchy without ever feeling dumbed down, and Rainbow are masters at evoking awe and wonder alongside the straightforward rocking. "Stargazer" is a perfect example, a tale to be told of an epic journey. Ronnie sings of the heat and the rain, the towers of stone, and Eastern-sounding melodies mingle with the constant marching pound of the drums to paint pictures of a trek across a vast, scorching desert, and all the wondrous sights along the way.

Rising gets a 5/5 because I simply can't justify giving it anything less. There isn't a wasted moment here, not an ounce of fat to be trimmed, not a single solitary bit of filler, just six tracks of pure, concentrated awesome, and every fan of heavy music should have this one in their collection.

Rainbow’s debut album “Ritchie Blackmore’s Rainbow” was a difficult one for me. I really wanted to like such a well-respected & highly regarded hard rock record but unfortunately I couldn’t quite look past the inconsistent song-writing & execution. There were some really promising signs in the first half of the album but things faded significantly in the back end & I found myself losing interest. Apparently Ritchie wasn’t terribly enamored with the result either as he elected to replace his entire band for 1976’s follow-up release “Rising”. Legendary frontman Ronnie James Dio was the only band member to be retained so there was every likelihood that things might sound a fair bit different going forwards. “Rising” was my entry point for Rainbow & it’s always been a funny album in that my opinions have often fluctuated over the years but I think the time & attention I’ve given it over the past week has finally cleared up any indecision.

Even the most casual listen to “Rising” makes it blatantly obvious that Rainbow are an entirely different band to the one we heard on “Ritchie Blackmore’s Rainbow”. It’s a much more epic sounding record. Not so much from a production sense as the production is still a little thin. I’m talking more about the instrumentation, themes & atmosphere. Everything is bigger! The blues rock backbone that was so evident on much of the debut is now overshadowed by the stronger & more exciting presence of early heavy metal. As a band Rainbow now sounds far more sure of themselves. There is a confidence that was sorely lacking before. The recruitment of gun session drummer Cozy Powell added substantial weight to the rhythm section while 19 year-old keyboardist Tony Carey also plays a strong role in defining a more substantial sound for the band. Ritchie’s exotic lead guitar solos seem to enhance the lyrical themes at times & although there are still some hints of the blues in some of his riffs this is definitely a much heavier Rainbow. I do have to admit that I struggle with Ritchie’s slide guitar solos a bit though as it’s just not my thing. Vocally Ronnie James Dio puts in one of the great performances in rock music here. It’s truly amazing that a front-man can totally overshadow the likes of Blackmore & Powell but Dio has done it pretty easily here. In fact he’s overshadowed every musician on every record I’ve ever heard him on to be honest. He’s quite simply one of the greatest rock/metal front-men ever.

For all its positives my major problem with “Rising” is in its overall consistency. In fact, it’s a very good example of what I commonly refer to as the quality sandwich. The album starts off very well with a couple really high quality songs. “Tarot Woman” is the sort of epic proto-metal that defines the album. It’s quite long with fantastical lyrical themes & soaring vocals that take you to places you’ve only dreamed of. Then we get the equally impressive rocker “Run With The Wolf” with its great singalong chorus. It’s an underrated song that’s often overlooked amongst the album highlights but I really like it. Then things drop off dramatically. “Starstruck” is a generic blues rock song that sounds very dull to my ears. It really kills that atmosphere that’s been built up over the first two tunes. This is followed by the decidedly cheesy “Do You Close Your Eyes” which sounds quite like early 80’s Van Halen party song to me. It’s not horrible but it’s again a big step down from the earlier tracks. Thankfully things are about to pick up in a major way with album highlight “Stargazer”. This eight & a half minute piece is clearly the defining moment for Rainbow. It features an incredible atmosphere & a stunningly exotic Blackmore solo while Ronnie puts in one of the great vocal performances in all of rock. To be honest I think this song warped my opinion of the record for many years as it’s hard to look past. Finally the album is closed out by another eight minute monster in “A Light In The Black”. It’s an up-tempo rocker in the vein of “Tarot Woman” with some great singalong vocal hooks & some long keyboard & guitar solos.

I think I’ve generally always wanted to like “Rising” more than I actually did & that’s not difficult to do if you focus on the highlights. However if I look at the tracklisting holistically I can’t help but be a little disappointed with the two tracks in the middle of the album. And when you then consider that there are only six tracks on the album it’s hard to deny that this drop in quality in the middle is a significant factor & I’ve had to adjust my score accordingly. “Rising” is a substantial step up from “Ritchie Blackmore’s Rainbow” & features some amazing performances but I think it could have been even better with a bit more time & a little more quality control.