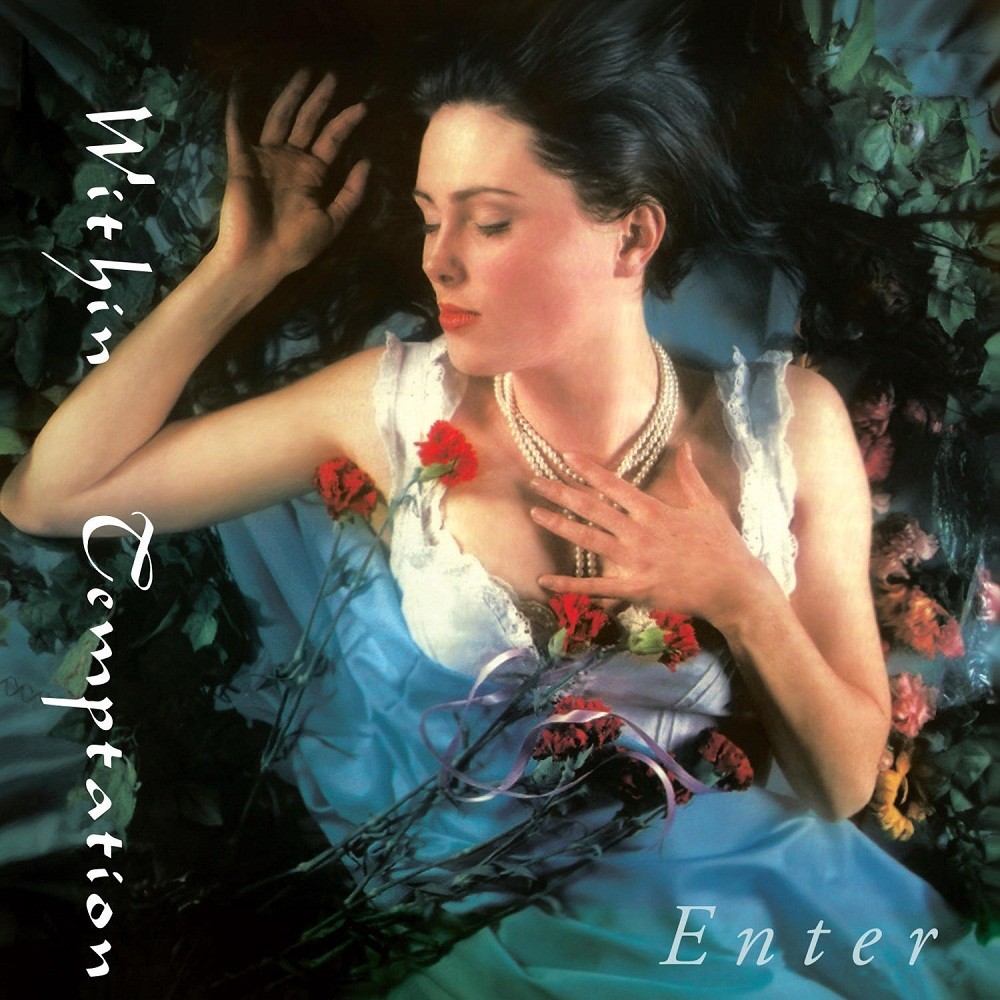 Ok, so it'll shock approximately no one that 1997's "Enter" debut from Dutch gothic doom metal exponents Within Temptation wasn't for me but perhaps not for the reasons that many of you might suspect. I did hear bits of Within Temptation back in their early days but never paid a lot of attention to them given that my taste in metal was on the polar opposite end of the metal spectrum & that's still essentially the case. I mean, despite the link to the gothic doom metal movement, "Enter" isn't all that far away from the band's later symphonic metal label given that around half of the tracklisting would likely qualify for that tag when examined in isolation. Sure, the strongest element at play & the most comfortable way to pigeonhole "Enter" is via the gothic metal subgenre but there sure is a lot of synth work going on around it. Also, any metal fan worth their studded battle vest would be remiss to overlook the fact that the majority of the riffage is based purely on 1990's death doom metal &, given the inclusion of cookie monster vocals in roughly half of the tracklisting, it's no surprise that "Enter" is often linked with doom metal.

Surprisingly, the female vocals of Sharon den Adel are the clear highlight of the album for me & I definitely prefer the sections where she takes centre-stage whilst accompanied by predominantly clean instrumentation. The more extreme end of Within Temptation's sound was still very much an evolving concept at the time & is far less convincing here. In fact, the musicianship on display is a significant stumbling block for me given that the instrumentalists were so clearly still learning their craft, particularly the guitarists who suffered from a poor production job & aren't exactly convincing with their re-enactments of these slow-paced & simple doom riffs. Keyboardist Martijn Westerholt also struggles for timing on occasion &, more often than not, his chosen synthesizers sound pretty dated too. This isn't an attractive look given my pre-existing repulsion towards synth-driven metal. And finally, the death growls of guitarist Robert Westerholt rank relatively poorly when compared with other half-decent cookie monster wannabes.

So it might sound like there's really not all that much going for "Enter" & that's true to an extent however I still find myself enjoying a good half of the eight tracks included & that enjoyment inevitably lines up with the tracks that utilize less of the synthesizers & death growls & more of Sharon's sweet vocal lines. There's no doubt that Within Temptation cross the line into being over-dramatic a little too often for my liking but when they hit on something with a little more maturity about it I find myself struggling to maintain my general feeling of apathy. One can tell that there are some good ideas in there somewhere but the band are still a little too green to know what to do with them. Then there are a couple of real shockers in "Gatekeeper" & "Blooded" which see me genuinely struggling to keep from offloading a cringe-faced look of revulsion.

Ultimately, there's little doubt that I'm not the target audience for a record like "Enter" but, at the same time, there are far too many flaws for it to overcome here & I can't see myself returning to the album any time soon.

Enter: a completely different beast from what everyone knows Within Temptation for today.

Within Temptation has made quite the name for themselves with their very accessible, alternative-tinged brand of symphonic metal. Most fans going back to this first release of theirs would be shocked by its drastic stylistic difference, however. Enter showcases a sound that is very similar to that of 90s beauty-and-the-beast metal pioneers Theatre of Tragedy: a melodic yet very melancholy blend of death and gothic doom metal. Heavy riffs and dark melodic leads abound on this album, along with symphonic keywork that is significantly more haunting than anything they would have on subsequent releases of theirs. Another big difference here, that I mentioned just earlier, is the inclusion of prominent growled vocals by guitar player (and future husband of lead vocalist Sharon) Robert Westerholt. His vocals sometimes even take the forefront over Sharon, with the track "Deep Within" not featuring Sharon whatsoever. Sharon is mostly the lead voice on here, regardless, and Robert's harsh vocals compliment Sharon's beautiful timbre very well.

All in all, this is what was a very different band from the one we would come to know by the name Within Temptation. Performances of songs off of this album during the band's live shows are exceedingly rare these days as they've moved past this style completely, forging their own identity for good. Still, this is a very good album in the same vein as early Theatre of Tragedy, and though it's not their most inventive and catchy, it's certainly one of their best anyway.