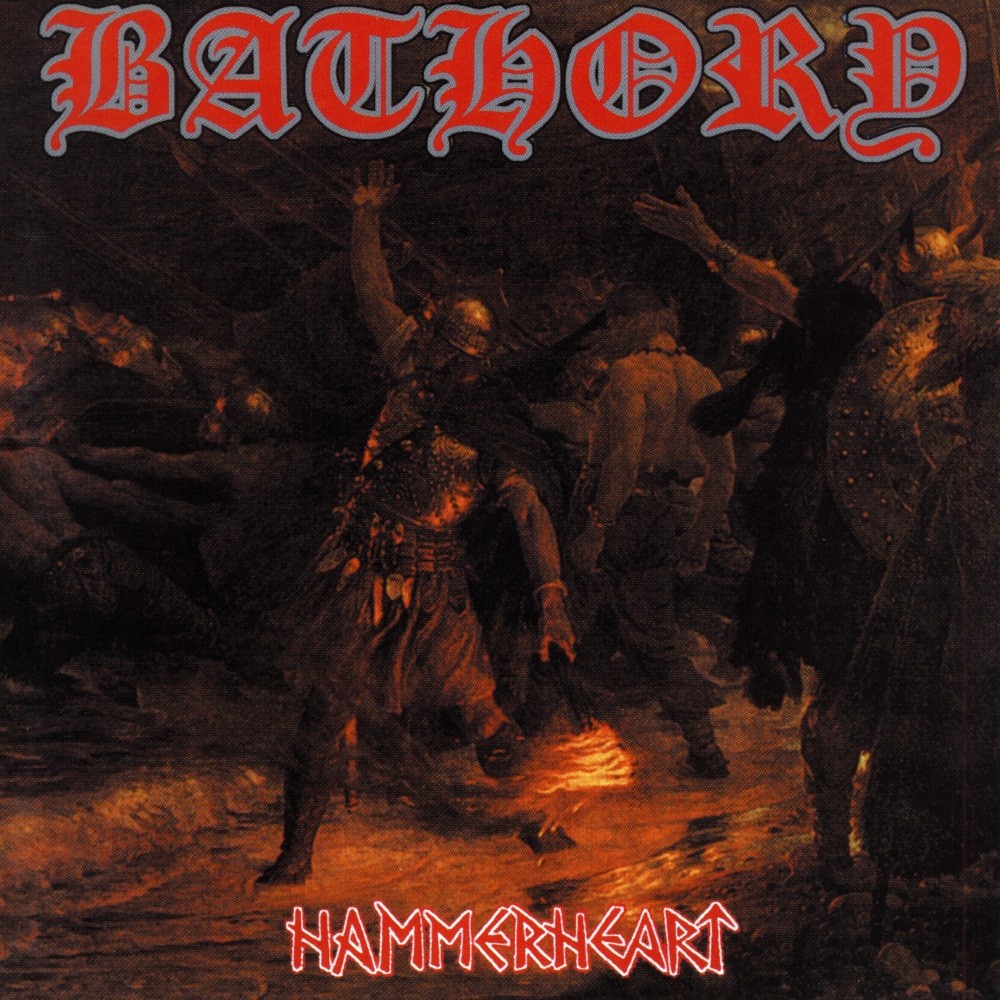 Every now and again a band comes around that consistently exists on the cutting edge of creativity, and for Extreme Metal in the late 80's, that band was Bathory. Although Venom and Hellhammer began coining the term Black Metal one or two years before the release of their self-titled album, Bathory exploded onto the scene with three of the rawest and most evil albums that early Black Metal would conjure. Their thrashy Black Metal sound would peak with Under The Sign Of The Black Mark, but there was still a sense of growth from the band. Most of the tracks had Bathory's normal pounding drums, messy but aggressive guitar riffing, and Quorthon's incessant howling, but "Enter The Eternal Fire" always stood out to me as Bathory starting to realize their next vision. The double bass and eighth-note snare is replaced by a slower and heavier 4/4 rhythm with a powerful crash cymbal, the Black Metal insanity is replaced by slower, more discernible , more epic riffing, and Quorthon's vocals are a bit more reigned in and musical compared to his normal barking. "Call From The Grave" and "13 Candles" also exhibit these qualities, but "Enter The Eternal Fire" has that larger than life feeling that would carry over into their turning point album, Blood Fire Death. While Blood Fire Death is still very much a classic Black Metal album, the intro of " Oden's Ride Over Nordland" into "A Fine Day to Die" and the closing "Blood Fire Death" shows Bathory leaning into the tendencies shown on "Enter The Eternal Fire" even more by adding even cleaner production to the riffs, adding atmospheric sound effects and choir, and having a more extended song structure with both songs clocking in at over 8 minutes. These two songs would serve as the foundation for Quorthon's next project released a year later, Hammerheart.

Hammerheart wasn't even Quorthon's first dive into a new sound for Bathory, with Blood On Ice (1996) being initially written before Hammerheart. It was obvious that Quorthon wanted to double down on the epic fantasy elements he touched on in Blood Fire Death, but couldn't fully decide on what would be the best path would be for Bathory as a band for this new vision. Rumors are that Quorthon believed that Blood On Ice would not be well received as it was such a drastic shift in sound after Blood Fire Death, and after listening to Blood On Ice I'd say that's a fair assessment. Instead the world got Hammerheart, the first true Viking Metal release from the same band that created one of the first true Black Metal releases, which is an achievement in of itself. The grinding production of the Black Metal-esque riffs are still prevalent in Hammerheart, but everything has been slowed down to a powerful march rather than a blistering sprint, which lets the raw production settle a bit more comfortably than you would think. "Shores In Flames" wastes no time showing that this new riff style works incredibly well alongside the rest of the album's signature features like the Viking choirs and softer sections that are filled with natural sound effects. While the choir can be a bit overused at times, it does a great job of selling the larger than life style that Hammerheart tries to convey. "Baptised In Fire And Ice" has the most recognizable choir section with the trade-off between it and Quorthon during the chorus, which is very well written despite being horribly mixed in terms of volume and impact. The pounding and echoing drums took me a while to get used to since they sound like they're so far away from the rest of the band, but in the end they still have the impact to carry the epic feel, especially on tracks like "Home Of Once Brave".

The main attraction to Hammerheart lies in its epic scale while still being as raw and dirty as something like Blood Fire Death. Good and clean production is obviously an important part of music in general, but as early Black and Death Metal has shown, sometimes impurity can give an album like this the edge it needs. Although Hammerheart is not as aggressive as Bathory's other works, the familiar grinding sound keeps the slower riffs from sounding dull or uninspiring. The whole album is meant to sound larger than life, with heavenly choirs and extended guitar solos that really go the extra mile on tracks like "One Rode To Asa Bay". Quorthon himself tries to be as epic as the music he wrote as well, with his ragged voice extending way past its limits sometimes. While working perfectly on tracks like "Baptised In Fire And Ice", plus "Shores In Flames" showing he's still willing to do the slightly deeper Black Metal bark, a lot of the lyrical delivery comes off as wacky and amateurish on "Father To Son", and "Home Of Once Brave". Quorthon can be an initial hurdle for any new Bathory listener, but sometimes he just misses the mark completely on Hammerheart, which is a shame because the riffs and drums behind his singing are still huge and fantastic.

It's still incredible to me that Hammerheart is the first of its kind, since it nails so many aspects of what we consider the epic and theatrical Viking Metal genre to be. The massive riffs, the pounding drums, the atmospheric sections to try to transport the listener to the album's world, and the overall lyrical topics and feel are spot on for what a layman would consider Viking Metal to be upon first glance. Hammerheart does fall flat in some regards though, since the album does start to drag after a while due to its similar tempos and repeated use of similar ideas. The main riff on each song is fantastic, but the rest of the package fails to come together on tracks like "Valhalla" and "Home Of Once Brave" for me. Although the entire album is a wonderland of epic Nordic feeling and atmosphere of rowing across freezing oceans and burning villages in combat, its aforementioned shortcomings bring the experience down from being an absolute masterpiece to a gold but flawed standard of Viking Metal.

As someone who knows Viking Metal from bands like Ensiferum or Månegarm, I really wish that this style of Viking Metal would make a modern comeback, since anything that sounds close to this has been incredibly disappointing in recent years. Modern Viking Metal bands have evolved Hammerheart's style into something that is much more Folk oriented and, in Ensiferum's case, Power Metal oriented. They achieve that grand and epic scale through orchestral elements and higher, driving tempos, which is quite different than Hammerheart's slow and heavy style. This shows that, despite its flaws, Hammerheart is a wildly influential album in this space of Metal and one that still holds up and still has ideas that can be expanded upon in the future. I don't know if a revitalization of Viking Metal is coming anytime soon, but if it does, I really hope whoever spearheads it looks to the classics and captures that epic scale that Hammerheart is known for.

Bathory (Quorthon) is the type of band that is always innovating. They managed to invent 2 completely original styles of metal, Black Metal with 1984’s Bathory, and Viking Metal 6 years later on Hammerheart. They toyed with this style on 88’s Blood Fire Death, and finally the genre came into fruition here.

While this album is amazingly unique for its time, I do find a slight step down from Blood Fire Death, which is odd because the bookend Viking Metal tracks of that album were my favorite. It turns out, slower paced epic Viking Metal doesn’t feel as powerful without a ton of Blackened Thrash pummeling you in between. Hammerheart has some truly epic songs that amaze (One Rode to Asa Bay is a masterpiece) but the majority of the material doesn’t leave me in the same awe as say, Blood Fire Death or A Fine Day to Die. Since this album is much more uplifting and much less dark, the riffs aren’t really evil or sinister; rather, they are just there. In all honesty, I can’t remember any notable riffs off the album, as it puts much more emphasis on atmosphere and Quorthon’s vocals. The rhythm section is slow and monotonous, but it does create a martial mood befitting the themes.

Off of those notes though, this is still a fantastic album, and Quorthon’s vocals are actually quite awesome. He’s evolved from a pure Black Metal shriek to what sounds like a haggard yell very capable of hitting and holding notes, which was necessary to make the jump from Black to Viking Metal. The atmosphere is effective and the backing vocals provide a great sense of grandeur to the whole package. The songs individually are not always Bathory’s greatest, but the album as a whole works very well due to these connecting themes.