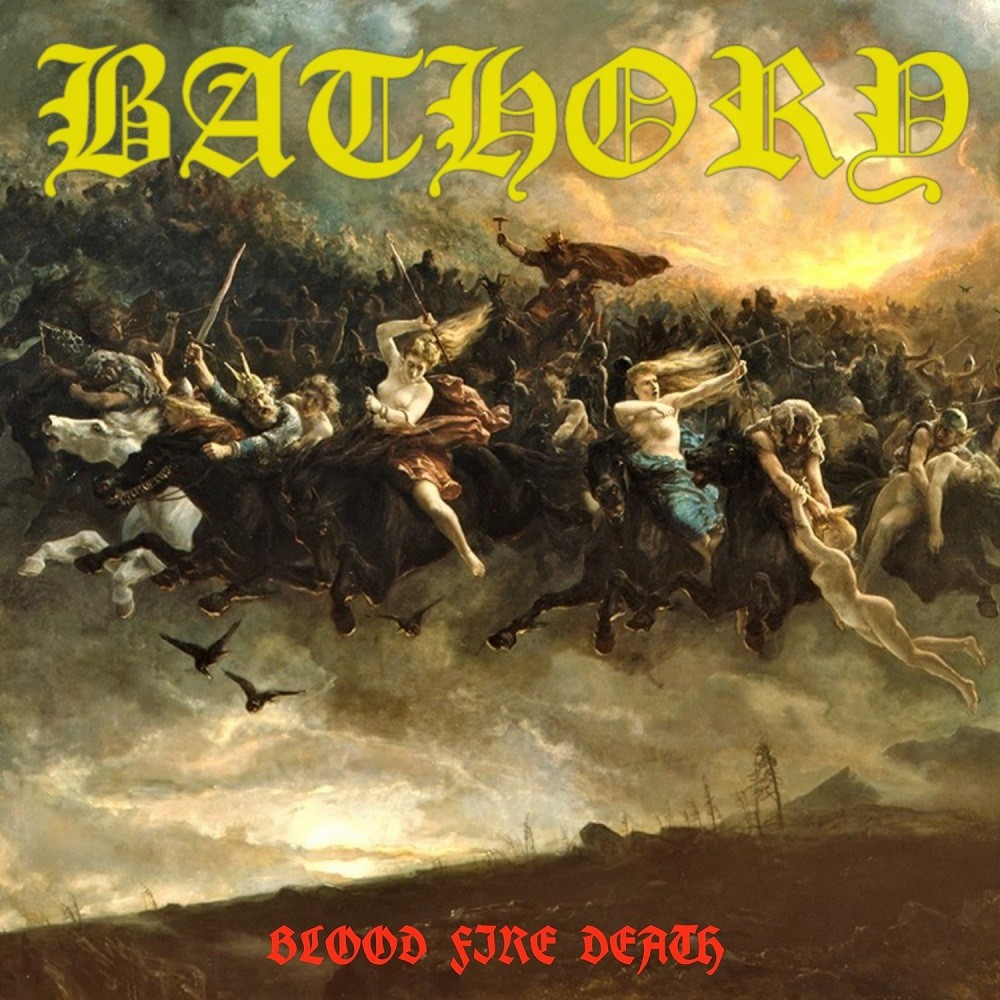 Now here's a classic! Blood Fire Death is the last black metal album that Bathory would release and it was a ripper. First things first. Oden Rides Over Nordland is one of the absolute greatest intros to any album ever and when combined with A Fine Day to Die makes for a cracking opening to the album. Secondly, the artwork is fantastic and suits the epic scale of the album perfectly.

There are a few other classics on here as well with the shredding intensity of Dies Irae and the monstrous pre-Viking Metal era title track of particular note. The only downer is that there are (as is typical of Bathory albums) a couple of tracks that don't match the standard of everything else involved. In this case it's Pace Till Death and Holocaust. While these are still decent tracks, they make for a slightly less than perfect album. Still, if you like black metal, you’ve got to have this album! It's a shame Quorthon left this style behind from this point on. But then, he wouldn't have created the wonderful Hammerheart that followed shortly afterwards.

Blood Fire Death marks one of the most clear improvements in a band I’ve seen. Bathory’s first album spawned true first wave Black Metal, and the two that followed delivered more quality yet samey material. All were very consistent packages of thrashy Black Metal with amateurish musicianship, horrible production and yet some sort of incredibly alluring interest factor that made it all sound right. On Blood Fire Death, Bathory opted to stop delivering more of the same and put the bar way higher.

Here, they abandon all their weaknesses. The music, while still simple oftentimes, is played fast and sharp; gone are the messy notes and offbeat drums, and in addition there are moments of great skill displayed as well. More importantly, the band continues to focus on mood and use their greater skill to craft awesomely aggressive and sinister soundscapes rather than showing off. The production is also much better here, and somehow they manage to hit a fantastic sweet spot between keeping the raw grit of true Black Metal and keeping all the instruments audible and sounding great. The riffs switch between moody Black and aggressive Thrash riffing and both play off each other perfectly, and despite liking previous Bathory albums, I find the riffs here to be all around much better and more memorable, maybe no small thanks to the guitars being clearly audible.

The band also capitalizes on their strengths. I said their previous albums were consistently good yet samey; this album delivers 7 consistently amazing songs that all have very distinct sounds to them. Opting for a more epic sound (but no less evil and thankfully no less serious), the band adds some keys and synths (usually choirs) here and there, and it works fantastically. They never overdo it, adding just enough to accentuate the songs and add to the individuality of each composition. The obviously synthed sounds might sound cheesy in other cases, but here the synths being not so high quality actually matches the raw mixing and ends up creating this sound that is just somehow off in the best way.

The last thing I’ll say is Quarthon finally perfected his voice. My god that hollow, raspy call is amazing. He even manages to add a lot of variety to the way he screams, switching it up to serve each song individually, and adding a ton of passion to it when he tries. Simply one of the best voices I’ve heard in metal. The lyrics are great too, ranging from the first signs of the Viking themes, to old school Satanic madness, all with peak delivery.

When it comes to albums and bands that have been said to completely define or create a certain genre, I try to keep my wits about me and my nostalgia factor in check. The notion of "this album changed the way music is perceived" can be a quick and easy way to justify ranking an album as a top scoring 5 out of 5, but does that necessarily mean that the album itself is good? More often than not yes, these classic albums live up to their legacies, but I try to keep an open mind. Blood Fire Death took all of my doubts and pounded them completely out of existence.

I had been listening to the front half of Bathory's discography just to educate myself on where the Black and Viking Metal genre came from, and at first I didn't think I'd find an album that made me "get" it. Bathory's self-titled debut, The Return..... , and Under the Sign of the Black Mark were great primers for the founding of Black Metal, with Under the Sign of the Black Mark being one of the strongest Black Metal albums I've heard. Bathory being able to take a Thrash Metal foundation and somehow build upon the sound by lowering the quality in multiple ways is strange but impressive in a historical sense. They also pull off the lo-fi, terrible production sound better than most modern Black Metal bands; it sounds more genuine rather than a gimmick, which is admittedly pretty obvious since they were probably working with what they had available to them at the time.

As impressive as their first three albums were, Blood Fire Death hit that sweet spot for me where I finally understood why this band is so important and why Black/Viking Metal can be an amazing genre. While Under the Sign of the Black Mark is Bathory's essential Black Metal album and Hammerheart is their essential Viking Metal album, Blood Fire Death marks the collision of these two genres and Bathory's clear transition into Hammerheart. Having these two genres interact with each other and attempt to force themselves into the spotlight over the other is fascinating to listen to, which is what I think makes this album special.

Blood Fire Death is book-ended by "A Fine Day to Die" and "Blood Fire Death", which are lengthy epics where Viking Metal triumphs over Black Metal, giving a more theatrical and riff-focused performance. Aggressive and slower riffs than the normal Bathory fare along with more chorus and clean guitar parts give these two tracks a sense of grandeur and triumph. The Thrash Metal solos and Bathory sound quality are still there, but it manages to sound larger than life and be heavy as hell. Quorthon's voice is as powerful and ragged as ever, but a slower, more clean singing style finally emerges from him on "Blood Fire Death", which is an awesome shift to hear.

In the middle of the album, Black Metal reigns supreme. Each song from track 3 to track 7 is just as aggressive, evil, and hatred filled as the average song from Under the Sign of the Black Mark. While the topics and overall feel of the songs are about war, battle, and bloodshed rather than Bathory's original best friend, Satan, it works insanely well to deliver a classic and raw Black Metal experience.

Combine these two distinct parts into one album and you have one of the quintessential albums of extreme metal that showcases the rise of two genres that would be a big part of the metal world for years to come. While I didn't enjoy Hammerheart's take on Viking Metal as much as it seems everyone else did, I can safely say that I understand and agree with Blood Death Fire being the beast of an album that it is.