Abigor - Nachthymnen (From the Twilight Kingdom) (1995) 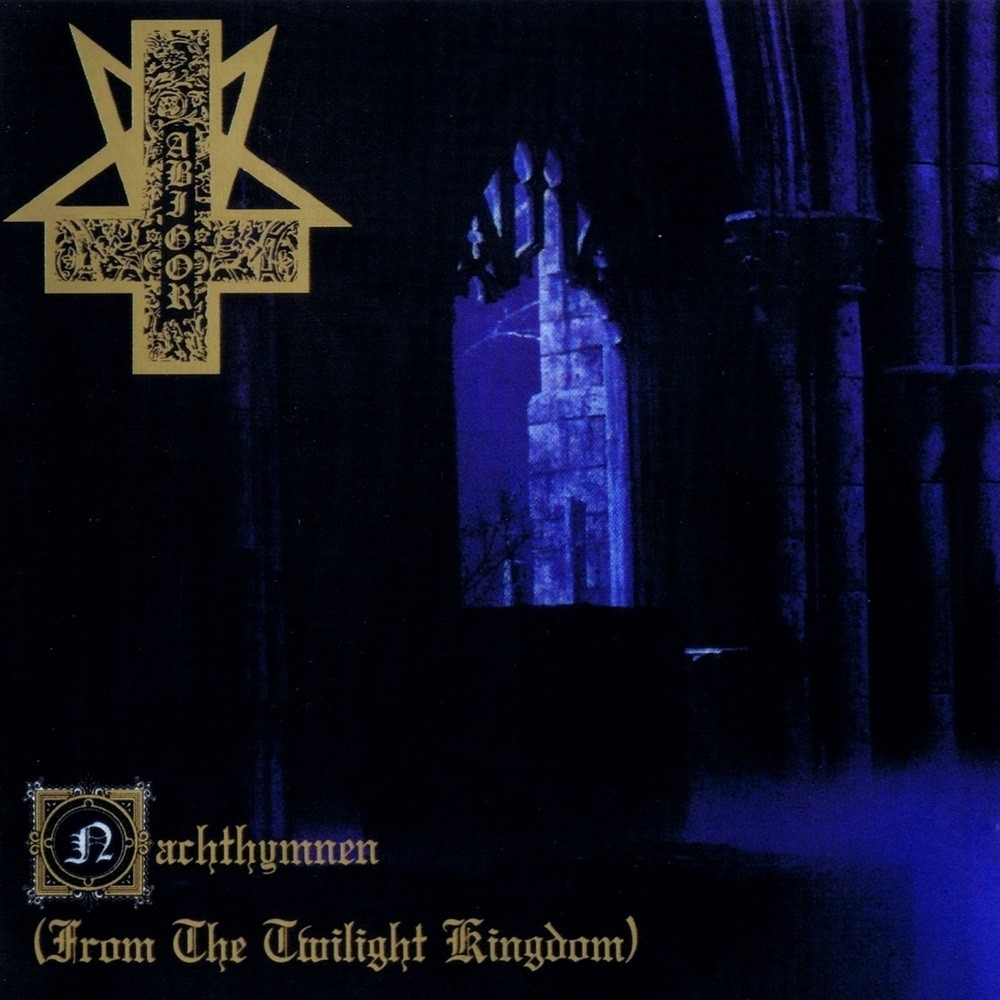 Gazes From the Cold, Stone Window

Nachthymnen is a remarkably mature release for a sophomore Black Metal album in the mid-90's, being as elegant as it is crushing and evil. Resonating medieval bass drums, acoustic guitars, and female vocals are woven into to Black Metal melodies to form something that almost sounds fully symphonic, especially in the middle portion of the album, but then reverts back to classic Black Metal to keep the album driving. Since this was released in 1995, I can only imagine Abigor was quite the fan of Emperor and wanted to try their hand at incorporating as many symphonic elements as possible. While they can sometimes feel thrown in just for the hell of it, they're used so often that they become a big part of the album's overall feel and character, which I really enjoyed in the end.

From the very beginning the symphonic elements are front and center, with a synth-like trumpet fanfare proclaiming the album's beginning, giving the listener the sense that Nachthymnen is going to be a bit more than just a blistering Black Metal album. It creates a great contrast between melody and riffing that all sticks to the same cold and medieval theme. The production and mixing isn't nearly as rough as I figured it would be either, with the symphonic elements being just as powerful as the metal ones, especially the big resonating and theatrical bass drum in tracks like "The Dark Kiss". The Black Metal drums are pushed back a little too far as per usual, which is a shame because their drummer puts on a pretty amazing performance throughout the album. I really feel there's no end to amazing Black Metal drummers even in the earlier years of the genre.

"Scars in the Landscape of Gods" and "Dornen" really up the ante for the symphonic and theatrical performance and this sort of style really kept me engaged through this somewhat repetitive album. I do enjoy Black Metal riffs, but there has to be something else supporting them for me to really feel attached to them. The two songs listed above, as well as the album as a whole, do a great job of having memorable sweeping melodies to go along with all of the chaos. While I wouldn't call Nachthymnen an all-time great, this is definitely a gem that has a distinct atmosphere and style that I particularly enjoy in Black Metal.

Abigor created some truly unique and brilliant black metal albums and Nachthymnen is no exception.

After Orkblut completely destroyed me (in the best possible way), I was looking forward to a follow-up a heck of a lot. I didn't have to wait long as Nachthymnen came out just a few months later. I think at first, I was a little disappointed that Abigor had made a more straight up black metal album after Orkblut had contained so many wonderful little interludes and a whole plethora of medieval instrumentation. But it didn't take me long to realise that the band had lost none of their creativity and had instead managed to mix a lot of this ingenuity into the black metal itself, allowing for a far more seamless experience that would reveal more and more on every listen.

The production went up a notch with the blast beats having a lot more punch than on previous Abigor outings. In fact, Thomas is an outstanding drummer that never gets enough praise and he somehow manages to perform some of the guitar for the album as well (one assumes not at the same time). Peter's riffs and melodies always contain a strange and unique element that I love, and this album has some truly beautiful work indeed. The way he mixes acoustic guitar into the opening track is breathtaking to say the least! Silenius' vocals are great as usual. He sounds unlike anyone else in the scene and somehow his style is perfect for both the intense black metal of Abigor and the more bombastic, symphonic musings of Summoning.

Yet despite getting over my initial disappointment and finding another great release by these Austrians, I must admit that Nachthymnen is by no means perfect. The female vocals are a nice addition but are unfortunately a bit hit and miss, and a couple of the tracks towards the end don't quite hold the level of brilliance displayed early on. But Abigor were certainly one of the most exciting bands in extreme metal back in the mid-nineties, and while they couldn't keep this high standard going for very long, no fan of black metal should be without their first few albums. Highlight tracks are Unleashed Axe Age, Scars in the Landscape of God, Dornen and Revealed Secrets of the Whispering Moon.