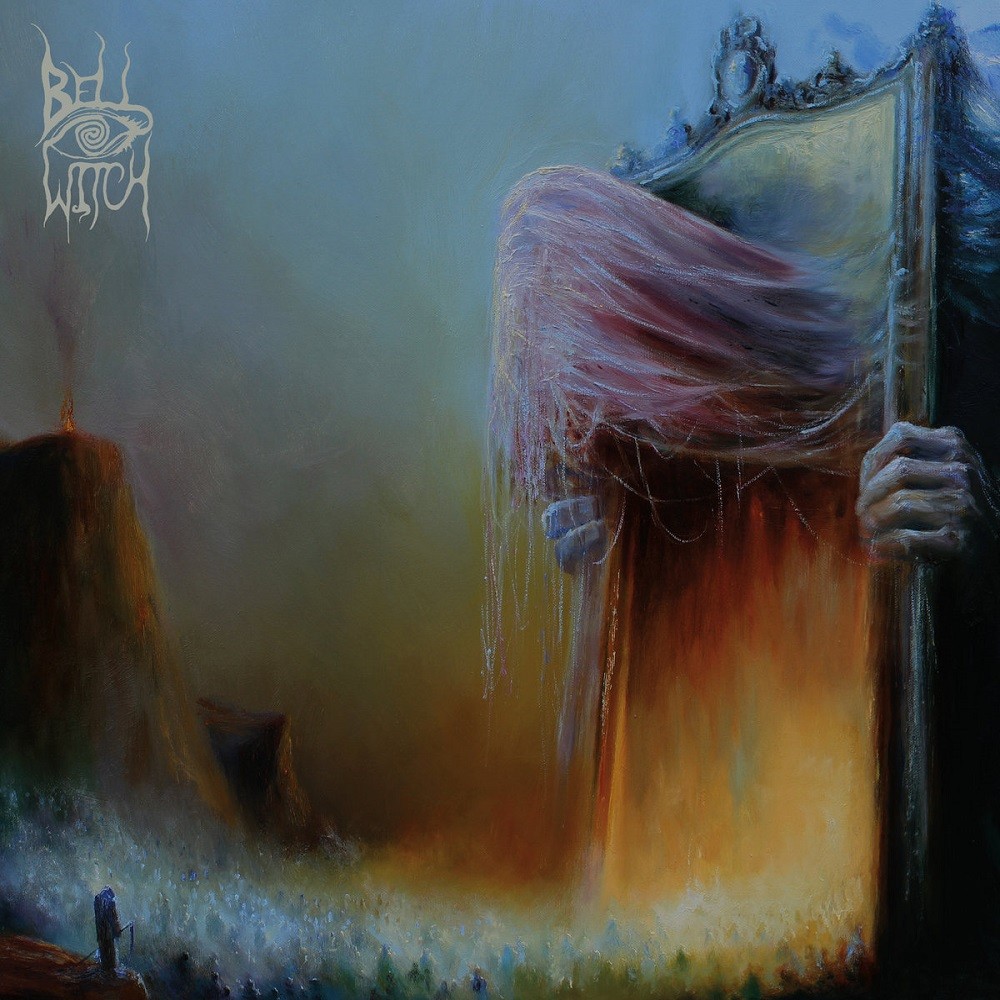 Firstly we need to put this album into context. It was recorded by founding member Dylan Desmond and new drummer and vocalist Jesse Shreibman after the other original member, Adrian Guerra, had to leave the band due to ill health. Shortly after recording began the former drummer sadly passed away and as a result the tone of the album shifted. Intended as a single 83 minute piece, due to the restrictions of physical formats, it was split into two parts for the CD double-disc release (the titles of which were As Above and So Below) and into four for the double album vinyl release. So, unusually, the digital release is the one that actually presents the album as originally intended.

Now this isn't an album for the impatient, as I'm sure you've figured out by it's length alone and it's subject matter and tone are not going to be to everyone's taste, but for those willing to give it the time, this is an extremely rewarding piece of music. For those unfamiliar with Bell Witch, they have no guitarist with the role being cleverly covered by Dylan Desmond's bass (and organ, to a lesser extent). I think this makes for a gorgeous subtlety in the sound of the album, adding an even greater depth to the already heavily melancholic atmosphere.

The album is made up of three parts, the second of which is called The Words of the Dead and, poignantly, features vocals recorded by Adrian Guerra for the previous album that were never used. Mirror Reaper is several degrees lighter than the usual funeral doom release, due to the lack of crushing guitar work and often minimalist approach, but this makes the atmosphere even more, not less, melancholy. Even so, ultimately the album does seem to reach a hopeful and positive conclusion. This is obviously a very personal piece of music to the band and an expression and processing of loss with which anyone who has felt similarly bereft can identify and maybe emerge on the way to healing, allowing a kind of catharsis, rather than merely an expression of melancholic doom.

Finally, it would be remiss of me not to mention the absolutely gorgeous cover artwork from the premier cover artist working currently, Mariusz Lewandowski, who's "Hooded Reaper" illustrations are also gracing several extreme metal releases of the recent past from bands such as Mizmor and False.

An hour and twenty three minutes is a significant period of time. I could clean my whole house or prepare and cook a three course meal in that time. Thankfully Bell Witch obviously have a cleaner and/or a chef as they decided to write one track during the time it would take most of us to commute to work. Fans of Bell Witch will already know their sound to be unusual in the sense that there's no guitar and they produced one of 2015's best releases when they dropped "Four Phantoms" to the doom masses.

Far from being an inhibitor, the lack of any guitar simply gives the Bell Witch duo opportunity to make the very best out of the bass and percussion, feeding them with atmospherics from varying sources and types to great effect. I won't lie, this album is an acquired taste. The layers going on here are oppressive both in terms of weight and the amount of patience (and time) required to simply sit down and truly appreciate them.

This is not your standard Funeral Doom/drone album. In fact it is so much more than an album, something audible yet tangible at the same time to fingertips of anyone willing to lose nearly 90 mins of their day listening to an album consisting of just one track. The bass guitar for Bell Witch acts as so much more than a stringed instrument. Sure, the harrowing bottom end that dominates the majority of the track is an ocean of a million regrets churning its tide, smashing roll waves against roll waves, eroding cliff faces and laying ships to wreck. But at the same time the bass sings to you, a song of sorrow and fathomless anguish like a Siren-esque accompaniment to the actual vocals themselves. The delivery of the vocals is brilliant in keeping with the atmosphere of the record as they breathe in and out, formulating whispers, growls and clean, ritualistic verses whilst all the while the drums build their own crescendos of crashing cymbals and subtle rolls that fade and grow back like the embers of some undying fire.

There's textures here too, not always obvious but certainly the variety on display takes the listener on a journey through every passage of crushing doom on and into post (post-doom's a thing right?) and ambient structures of peace and tranquillity yet still the hazy and murky dirge retains the atmosphere all through out.

I am a sucker for any record that matches the artwork that adorns it's cover. The artwork on "Mirror Reaper" is more than matched by the music behind it, I could stare at the artwork for the whole duration of the record and live out it's ethereal and menacing story to the full whilst doing so.