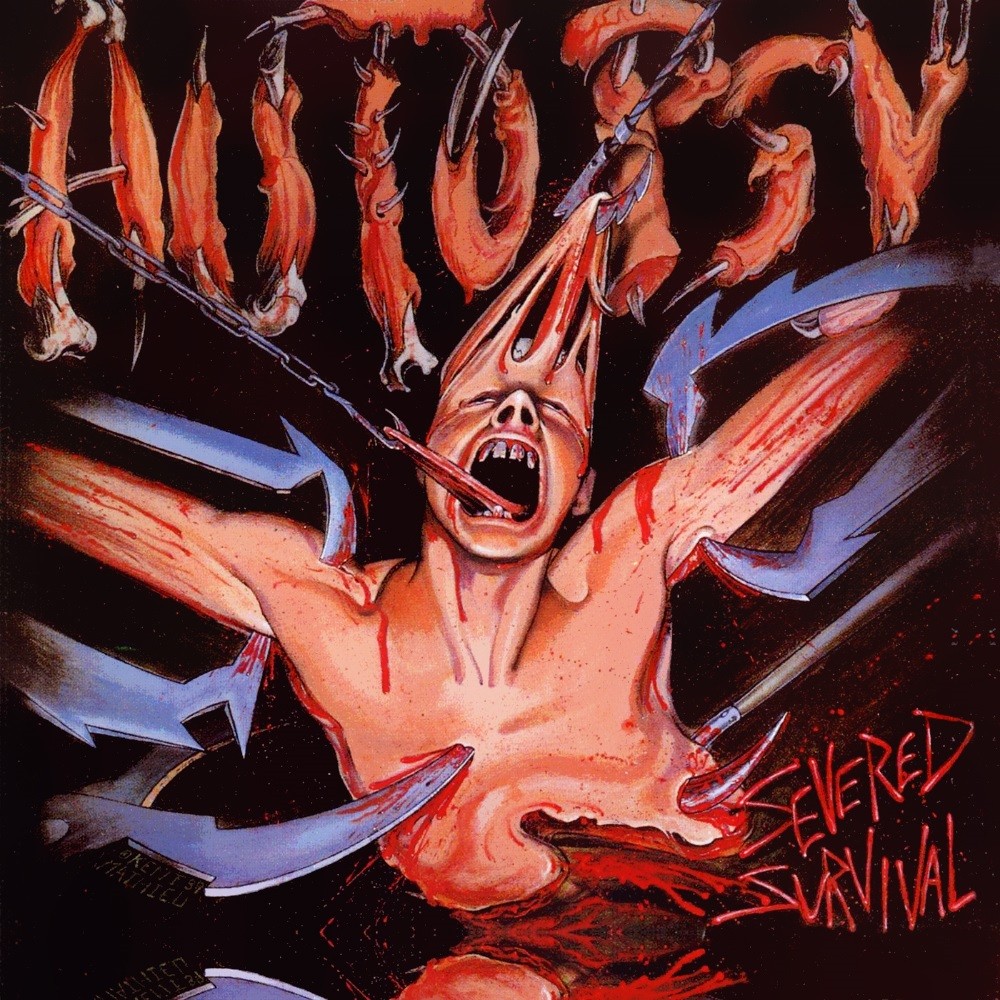 Most death metal fans know the story. 18 year-old drummer Chris Reifert joins seminal death metal legends Death in San Francisco in 1986 before taking part in the recording of one of the most important records in the creation of the death metal genre in 1987’s “Scream Bloody Gore”. Death band leader Chuck Schuldiner then decides to move back to Florida & gives Chris the option to relocate. Chris elects to stay in San Francisco & forms another one of the classic old-school death metal bands in Autopsy in August 1987. 1988’s “Critical Madness” demo sees the band signing with UK crust punk label Peaceville Records for the recording of their seminal 1989 debut album “Severed Survival” & the world rejoices. It’s somewhat of a fairytale for a number of reasons really. I mean for every band that goes on to critical & commercial success you’ll find a slew of failed musicians that fell by the wayside never to be heard from again & it’s actually quite rare to see this sort of success story (although there are definite parallels to the Dave Mustaine one with Metallica & Megadeth). And for Peaceville, it would be a change of musical direction that would quickly lead to the creation of a viable full-time business & one that is still going strong a full three decades later. But is “Severed Survival” all that it’s cracked up to be? Let’s find out.

The recording of Autopsy’s debut full-length would be a joint effort with Peaceville bringing in Metal Church guitarist John Marshall to co-produce the record at Starlight Sound Studios in California in January 1989. Marshall had previously produced not only Metal Church’s “Blessing In Disguise” record but also Sadus’ 1988 debut full-length “Illusions” so when Autopsy bassist Ken Sorvari made himself unavailable for the recording of the album for personal reasons, the now legendary Sadus bass virtuoso Steve DiGiorgio was drafted in to complete the recordings as a hired gun. I think it’s probably fair to say that Steve had no idea of just how prominent a role he would play in the way that Autopsy’s album would sound at the time.

The “Severed Survival” album would be released on 24th April 1989 & would sport some grisly cover artwork that depicted an image of some poor soul being torn limb from limb by a number of metallic hooks. Autopsy’s moniker would be displayed in what looked like raw meat which would be a further indication of the depraved sounds you were likely to hear within. It’s a fairly cheap looking effort it has to be said & later re-releases would see it replaced with a much more impressive illustration of some zombified surgeons peering down into the eyes of some unfortunate patient. I greatly prefer the look & feel of the re-release as it looks much more glossy & professional which would see it competing quite well in the extreme metal market environment of the time which saw every band & their dog coming up with increasingly attractive images of pure darkness.

The sound that was captured for the “Severed Survival” album was unlike anything the underground metal scene had heard before & it would go on to become a signature sound for Autopsy throughout their career. It was much sludgier & substantially less precise than most 80’s metal with a huge emphasis being placed on creating a genuinely disturbing atmosphere of death & torture that’s not too dissimilar to the image shown on the original release of the album. In fact, "Severed Survival" legitimately sounds like you’re inside the twisted mind of a serial killer in that it exudes an unsettling feeling of impending doom throughout. In order to achieve this, Marshall & the band have opted for a much sloppier & looser feel than most metal bands of the time were going for & in hindsight it was a stroke of genius. The drums were tuned quite loosely to give the toms & kick drum a deep tub-thumpin’ sound while DiGiorgio’s bass guitar would be elevated right to the front of the mix to provide additional emphasis to Autopsy’s already crushing riffs which were presented with a very distinctive & fuzzy rhythm guitar sound. The guitar solos of Eric Cutler & Danny Coralles seer over the top of the rhythm tracks thanks to a heavily filtered tone that was likely achieved with a stationary wah pedal if I’m not mistaken. Truth be told, it’s a really great sound for death metal & I don’t doubt that it was one of the primary reasons that “Severed Survival” would go on to be so successful for Autopsy.

Musically, Autopsy also offered the death metal community something a little different. The basis of their style was built on the “Scream Bloody Gore” model of old-school death metal that Reifert had played such a strong part in creating only Autopsy were a lot less sophisticated than peers like Morbid Angel, Pestilence or Death. There’s a much punkier vibe going on here than anything we’d hear from those bands & I put a lot of that down to Reifert’s drumming. I probably should have mentioned it earlier but Chris is one of the rare metal drummers that also handles the lead vocal duties & I’d suggest that his signature style is the logical outcome of that arrangement as it’s fairly simple. His best work invariably occurs when he goes for a more tribal feel during Autopsy’s doomier moments but I have to admit that his more up-beat & punk-driven beats are a bit of a let-down for me personally. They’re just not my thing particularly. I much prefer Autopsy’s strong use of slow dirge-like doom metal riffs with bands like Black Sabbath & Trouble clearly having made a substantial impression on the band. In fact, it can easily be argued that “Severed Survival” is the true birthplace of the doom/death subgenre as it’s such a major component of what makes Autopsy so appealing. I absolutely love the crushingly heavy & suffocating darkness in these parts & it’s the uneasiness it leaves the listener feeling that makes it so appropriate for a band whose lyrical themes are so heavily centred around serial killers. When you stick in the occasional off-beat arrangement with clever transitions & some very twisted lead harmonies you’re left with one beast of a death metal sound.

The performance of Steve DiGiorgio isn’t one of his most challenging & experimental but he certainly adds an additional layer to Autopsy’s already disturbing sound. His bass work is truly punishing & I particularly enjoy his use of bass chords at key moments which makes for something a little different. I’d highly recommend that you make sure you have a decent set of speakers before giving “Severed Survival” a spin though as you could be in for a rude shock otherwise. Cutler & Coralles show off some decent chops during their solos however I do think that there’s a little bit of a lack of ambition in their faster solos which tend go for a huge flurry of notes without really saying all that much. Their slower lead work is much more interesting as their note-selection can be quite unnerving at times.

Reifert’s vocals were always going to be a talking point because there’s been very little restraint shown in his approach. I wouldn’t say that he goes for your classic death metal grunt. His performance here sounds more like the crazed bellows & barks of an emotionally tortured & psychologically twisted serial killer. It’s almost like he’s too embarrassed for people to decipher the storylines he’s subjecting us to because I’ll be damned if he isn’t intentionally trying to make his language less intelligible. I have to admit that I don’t love his delivery & I’ve often wondered what Autopsy could have achieved with a full-time front man but it’s definitely worth dwelling on Chris’ sick, gore-soaked lyrical content for a minute because “Severed Survival” would be the record that would kick off a generation of subsequent death metal bands working predominantly with a palate of disgusting & offensive filth…. in a good way of course! Some may say that we’re better off for not being able to understand what Reifert’s saying & one look at the lyrics should tell you very quickly which side of the fence you fall on.

Ultimately I’m always left with mixed feelings about “Severed Survival” & it’s been that way since I first encountered it back in 1989/90. I love Autopsy’s swampy sound & the authentic atmosphere of pure death it pervades. They really did create something very original there & their talent for writing the eeriest doom metal riffs imaginable leaves me wishing that they would have taken that direction in more of a full-time capacity just the once so that I could see what it might have amounted to. Unfortunately, I just don’t find their bouncier up-tempo material even half as appealing & almost every track sees some glorious doom material being tarnished by one or two lethargic & unintimidating punk-driven beats. The overall result is that whilst I enjoy almost every track on “Severed Survival”, I very rarely LOVE any of these tracks. It’s only really “Charred Remains” & “Ridden With Disease” that manage to overcome this issue & for this reason I find this release to be the very epitome of a 3.5/5 release by my rating system. I’m not sure I’d say that “Severed Survival” is overrated. The influence it's so clearly had on a band like Carcass is undeniable so I think it's more just a matter of it not quite fitting in with my comfort zone despite being a generally rewarding listen.

I came late to Autopsy. I found it a little difficult to digest back in my teenage years when I preferred my metal clean and well produced. Over the years I've learnt to appreciate dirty, crushing, old school death metal and picked up on albums such as Severed Survival. And how gorgeously disgusting it is!

Chris Reifert left Death and formed his own band with the sole intention of creating a monstrously gory and filthy death metal band. And he succeeded beautifully! The guitar sound is always very full and distorted yet clearly audible. Chris' vocals are brutal and guttural. How he could ever do that while drumming is beyond me!

One look at that cover artwork and you'll get a fair idea what you're in for. The lyrics are gross, but it really doesn't matter as you generally won't understand anything he says. Highlights for me are Charred Remains, Disembowel and Ridden with Disease, but every track is enjoyable.