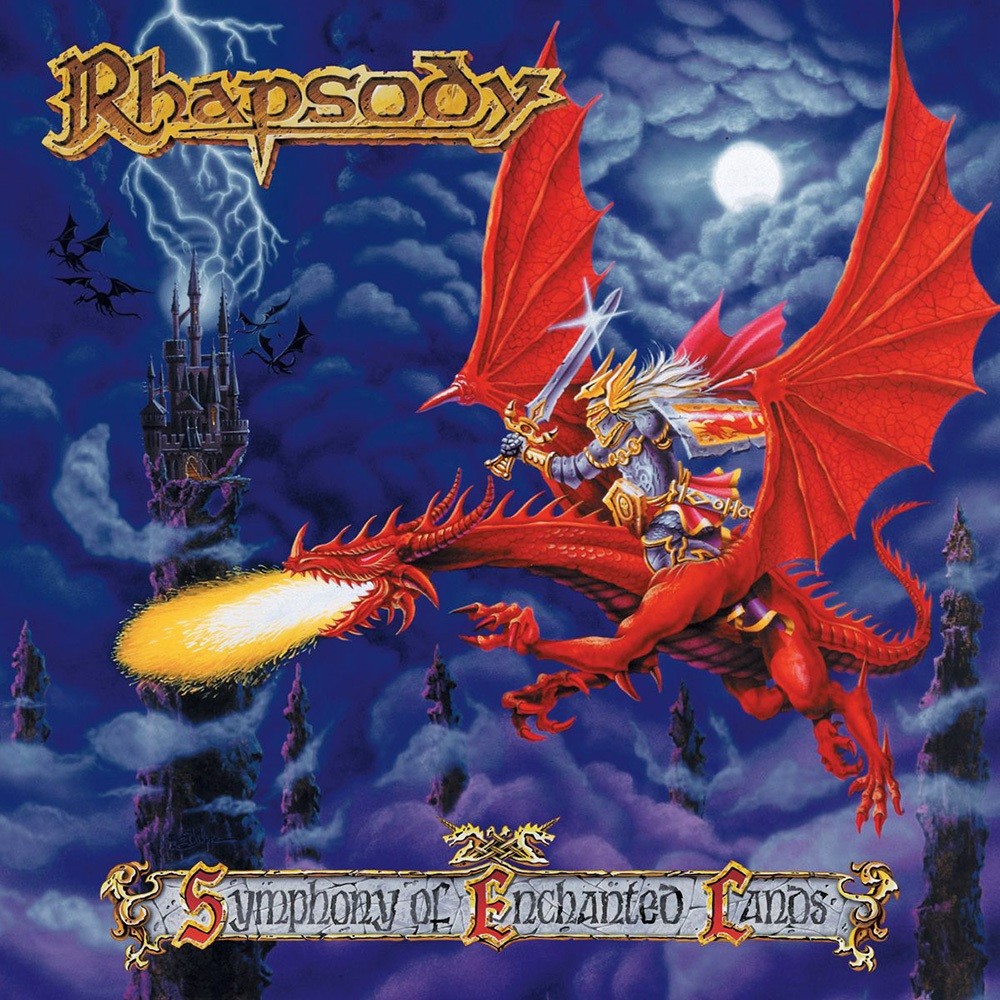 Rhapsody of Fire (then Rhapsody) had already blended film score soundtrack with Helloween-style power metal in their debut Legendary Tales. Then they did that unique metal hybrid again more perfectly! Symphony of Enchanted Lands is a glorious album that allows the listener to transcend into the fantasy realm the concept is set in.

This album is similar to Legendary Tales in some ways; a large collection of tracks with riveting fanfare and catchy choruses with at least one epic to rule them all, perfecting the epic neo-classical metal form. The greater difference is the improved overall production that more clearly defines the guitar texture. A few songs increase the acoustic and orchestral instrumentation while keeping the metal, giving those songs the same vibe as the soundtrack to another epic saga, Lord of the Rings.

For the intro "Epicus Furor" (Epic Fury), instead of a haunting church organ, actual full-blown orchestra is used to give the intro more of the epic fury the song name would imply. Then a drastic crescendo segues perfectly into the famous "Emerald Sword", the namesake for the saga and the true Rhapsody of Fire hit. Believe it or not, this is one of the best power metal tracks ever heard. It might sound a little cheesy, but it's a purely excellent symphonic power metal experience. EPIC!! The following track "Wisdom of the Kings" is another power metal fanfare with amazing choruses, riff-powered guitars, and catchy keyboards, all in the same speedy pace as the previous track. Of course we already know that "Emerald Sword" is far more superior.

After that glorious one-two punch, the next track is the two-part interlude "Heroes of the Lost Valley". The first part, "Entering the Waterfalls' Realm" is a brief instrumental with harpsichord, flute, and violin. The second part, "The Dragon's Pride" is where you get the dramatic spoken voice of Sir Jay Lansford for the first time. He is present in subsequent releases, and his narrations might sound cheesy but they still work as part of the high fantasy concept. Then we head into the longer intricate "Eternal Glory", a quintessential piece of epic power metal, with speed as emphasized as atmosphere, while still displaying the accomplished abilities of guitarist Luca Turilli and keyboardist Alex Staropoli. "Beyond the Gates of Infinity" is the same length as the previous track, though in a more progressive approach. The unusual intro is strangely reminiscent of horror soundtracks composed by Danny Elfman. Then we blast through the song itself that mixes epic with heavy.

"Wings of Destiny" is a much better ballad than the previous album's "Echoes of Tragedy". Instead of a cheesy male choir in the chorus, we get to hear the more measured vocals of Fabio Lione with serene piano work. "The Dark Tower of Abyss" is probably the most neo-classical song in the album with as much orchestral string usage as metal guitars. "Riding the Winds of Eternity" is the probably the fastest and simplest song on the album. It has amazing moments such as a soft orchestral keyboard break before the closest thing this song has to a guitar solo, reprising the song's intro melody. Then there's one more song, the true album highlight with all of its strengths from the songs before this and some of the best storytelling ever heard, the 13-minute 4-minute title finale epic! The first 4 minutes make up a two-part requiem, "Tharos' Last Flight" and "Hymn of the Warrior". The first part is a narration, and the second part is a quick segment with Fabio's vocals and a male choir in a rising buildup. Both parts represent the hero's sadness and mourning over the death of Tharos, a dragon who was his enemy but the hero spared him and the dragon spared the hero too at the cost of his own life. "Rex Tremende" is the actual song part of this suite where the warrior's sadness becomes anger and promises himself that he would kill the Dark Lord. This part is way more progressive than the rest of the suite and this album with themes and ideas varying in tempo and texture while keeping the structure coherent. Then the fourth part "The Immortal Fire" is a narration motivating the Ice Warrior to ride on and defeat the master of chaos to save the enchanted lands. An epic instant classic suite!

So there has been talk about whether of not this album or Blind Guardian's Nightfall in Middle-Earth is the best epic power metal album of 1998. Perhaps I can add those two albums to another DIS vs DAT thing on this side, but here's what I think; while they're both enchanting albums, Symphony of Enchanted Lands is the album I would suggest getting for the absolute best of Rhapsody of Fire. It doesn't have as much of a metal edge as their subsequent albums, but it towers over them with its unique addition of orchestration. If you can only afford to buy one of their albums, you gotta get this one. Peace, and love forever!