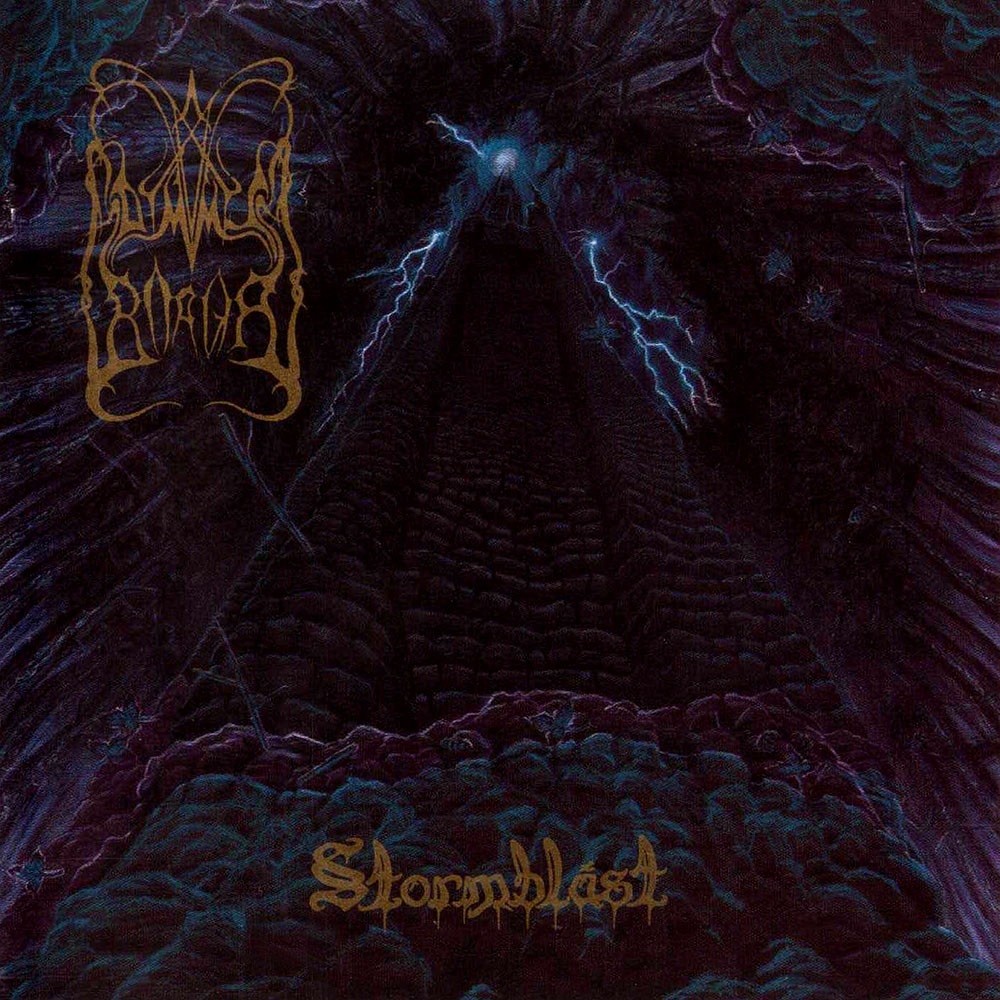 A slightly dodgy production is made up for by some very enjoyable symphonic black metal.

Dimmu Borgir seem to be given an awfully hard time in the metal community. It's a classic case of what we Aussies call tall poppy syndrome. As soon as something becomes successful and mainstream, we tear it down and stamp on it. It's like everyone wants to have their own private obsessions that no-one else knows about and I for one find it pathetic. Who cares how popular a band are if what they are producing is entertaining and at times, ground-breaking?! Anyway, back when Stormblast was recorded, Dimmu Borgir hadn't even remotely approached the mainstream and were producing rather lo-fi yet still symphonic black metal. Their debut For All Tid was a bit disappointing on the song writing side, not to mention the poor production and dodgy musicianship that stuck out regularly. Stormblast went a long way to correcting these issues, but unfortunately, they couldn't entirely eradicate them.

On the negative side, the production still has a lot to be desired. It's a bit weak and murky and some of the instruments (such as the piano) come across as tinny, losing a lot of their effect. On the positive side, the song writing improved a lot between the two albums. It's still quite lightweight, not really trying to inject the sort of venom and darkness that infuses so many other black metal entities. If I had to compare it to another album released around the same time, I'd say Arcturus' Aspera Hiems Symfonia. That album is far more entertaining and musically challenging, but both contain fairly harmless black metal (by that I mean not particularly brutal), a similar symphonic aspect and both suffer from a less than powerful production. Yet despite all this, Stormblast is very nice to listen to with some beautiful music, cool melodies and nice black metal riffs.

There are no 5-star masterpiece tracks on Stormblast, but it's all rather solid, with Broderskapets Ring, Når Sjelen Hentes Til Helvete and Guds Fortapelse being the highlights for me. Dimmu Borgir would change dramatically between this album and Enthrone Darkness Triumphant, which would cause the band's popularity to skyrocket. But don't assume everything the band recorded before that classic should be ignored. Stormblast is an enjoyable symphonic and melodic black metal album that hints at the potential these Norwegians contained well before they adorned thousands of t-shirts across the globe.

On a side note, there was something that bothered me the very first time I listened to this album and has continued to do so right through to today. Track number 4, which is a lengthy piano instrumental, sends immensely nostalgic notions through my brain but I've never been able to put my finger on where this recognition comes from. Over time I've come to believe that this track reminds me of a computer game I played on my Amiga as a kid and while looking on Encyclopedia Metallum today, I have finally been vindicated. Keyboardist Stian Aarstad stole this tune directly from a game called Agony (without permission from the original composer) and I can finally put that little mystery to rest. Plus, it also becomes apparent why Sorgens Kammer was left off the re-recorded 2005 version of this album.

After being totally underwhelmed by Dimmu Borgir's "For All Tid" debut, I decided to give their second album "Stormblast" the benefit of the doubt & therefore went in with an open mind. Although I find it to be a big improvement on "For All Tid", I am still a long way from really enjoying it. The production is still pretty poor even though it's undoubtedly better than their debut. The drum sound is particularly average & the guitars need much more depth (& probably more overdubs). Also, I'm afraid that there is just not much of a dark atmosphere or any form of aggression. It all just seems to float along in a very unintimidating fashion with the keyboards taking most of the focus. What they need are some riffs with real excitement in them. "Stormblast" doesn't appeal to my tastes so I pretty quickly find myself bored.