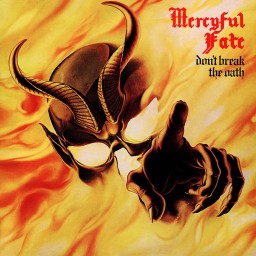 King Diamond was and always will be the weakest link in Mercyful Fate.  Quite an opening statement for a review of one of metal's best known albums I know, but one that reflects my opinion of the band perfectly.  No attempt at controversy here folks, just an opinion built on my experience of most of their discography.  As a presence he is undeniably an asset.  Menacing, foreboding and threatening, his very face is iconic in terms of all the dark and nefarious things that our preferred genre of music espouses.  Vocally though he is poor, his attempts at the higher end of the scale of notes coming off as farcical in the main.  He's far better when he drops to the more grim and murky style he deploys that suits the overall tone of the music so much better.

Right now your asking yourself "why he's given it such a decent rating if he hates King that much?".  The fact is that for all my criticism of the vocals I cannot neglect the fact that the rest of the artistry on this album is excellent.  In all reviews that I write where I score an album low it is because something catastrophic encompasses the whole experience that makes it an irretrievable disaster.  This is not the case here.  Wherever else I look on the record the quality is high (with the odd dip of course), whether it is the songwriting or the musicianship, neither are diminished in terms of their impact by my beef with the vocals.

Hank Shermann and Michael Denner truly show us what capable and intelligent six-stringers they are on this record, wielding their axes with poise and guile.  On more than one occasion they rescue a track and make the directionless or clunky structure of a track seem manageable and clearer just by their presence.  "Grabber" and Ruzz provide the real rhythm in the engine room giving the record legs when it needs to run faster and also able to subtlety control the pace when it need reining in a tad.

So "Don't Break The Oath" is not a complete album for me as it suffers badly at the vocal chords of King and even the sterling band that sits around him can't elevate it to the levels of praise that the album seems to get across the board.  It does not mean however it is a bad or even an average record, more just lacking in one important and influential area.

It's amazing what a good riff can do.

That's a solid piece of groundwork of heavy metal music (and a number of other forms too), and in Don't Break the Oath, Mercyful Fate demonstrate a masterful understanding of this idea, and how to combine those riffs with absolute conviction in what they're doing to craft something special.

Much like Melissa before it, Oath isn't strictly black metal, even in its earliest form, but it's a clear influence on the emerging style. Despite the ever-present cheese, the album is unrelentingly focused on the dark side of metal music, on the satanic, the devilish, the wicked and demonic. Like Venom or Sodom, they played a role in this new branch of metal music, and this gives the album a great identity of its own. Gone are the glorious charges into battle or the fantastical adventures. This is an album of blasphemy, devil worship and gleeful sacrilege.

This crystal clear intention gives the whole thing a great sense of focus, and the band's wonderful sense of showmanship is what truly sells it. Like King's wailing falsetto, the whole thing is certainly an acquired taste, and can seem silly, but it's all such diabolical fun to just go along with it. Everything is done with such confidence and poise, it's impossible to resist, especially when coupled with the obvious skill on show in the quality riffs and memorable songs. "Come to the Sabbath" is a call to attend the ritual that cannot be turned down, "A Dangerous Meeting" tells a dark tale you can't stop listening to, and there are few songs as theatrically brilliant as "The Oath": every element of it, the insanely good riffs, King's epic cries, the rising darkness of the intro, it's all put together like a dark twin of Dio's "Holy Diver".

Yes, Don't Break the Oath is cheesy and over-the-top, and no good metalhead cares, because this is what it's all about.

Choice cuts: A Dangerous Meeting, Night of the Unborn, The Oath, Come to the Sabbath