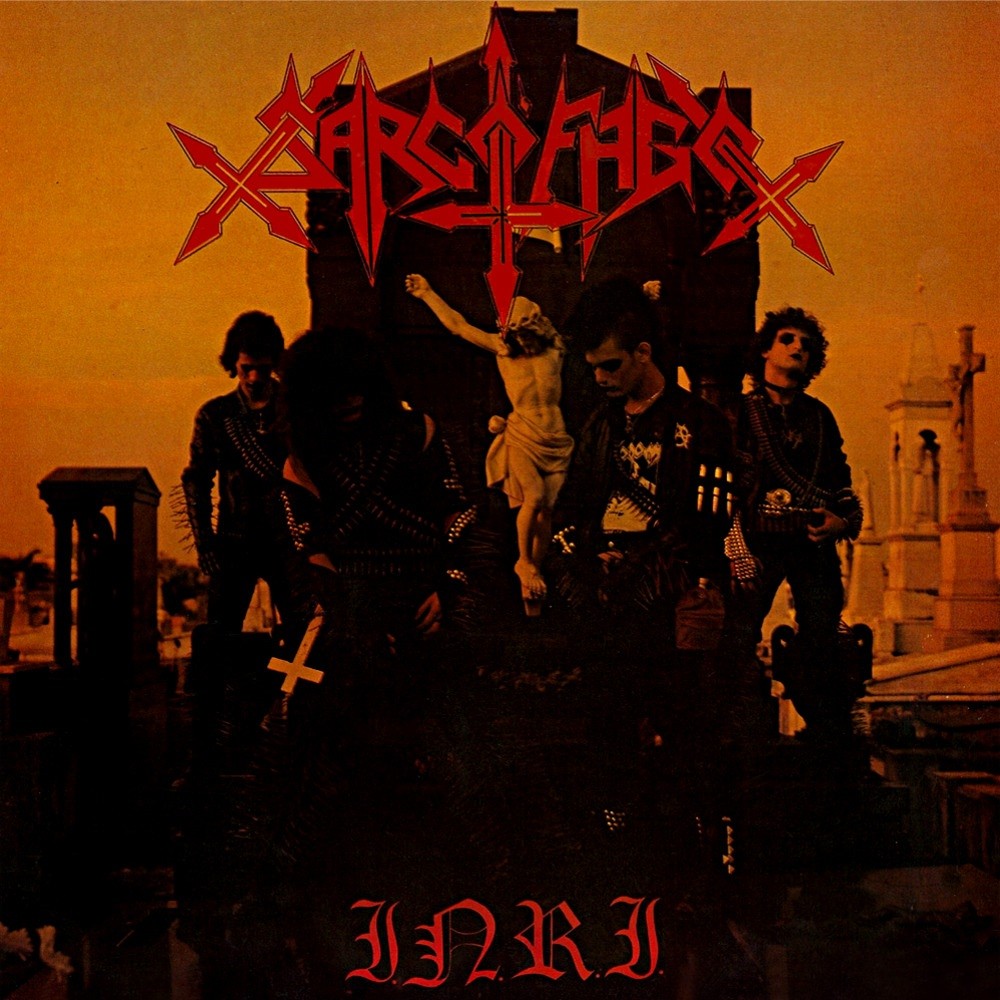 Well, I have to say this album caught me a bit off guard. I had heard about INRI many times over the years and had also heard that it had elements of black metal and thrash. But I never expected it to be this brutal and evil sounding. For 1987, this was a fair way ahead of its time. Bathory and Mayhem were the only other bands that come to mind that were creating anything closely resembling this during the mid-80s. There are screams of anguish, guttural satanic growls, evil lyrics and a general feeling that not everything is quite right with these individuals.

But that's not to say that this is an album you must purchase. The production is ordinary, the musicianship is fairly rubbish at times, especially the drumming. But credit where credit is due. These guys set out to write the most brutal music they could imagine, and I think they succeeded in their task. It's just not an album I will listen to very often. There are far better albums out there, that's for sure.

I.N.R.I might be one of the most interesting Black Metal albums to come out of the initial surge of the genre following Bathory's debut and The Return.... given how much it embraces the fundamentals of extreme metal. The songwriting isn't exactly great, the overall production and the volume of the drumming compared to anything else is past the point of lo-fi novelty, and the band members are sometimes teetering over the edge of falling out of sync with each other, but man do they ever go for it. As I've gotten deeper and deeper into extreme metal genres I've come to learn that it's not always what you're playing, but how you're playing it, and Sarcófago have a distinct kind of evil, unhinged energy that really carries this release. Even though Black Metal has now etched its place into the modern metal landscape, releases like this show that its beginnings were similar to most other sub-genres in that other Metal styles just weren't heavy or satanic enough for them. These guys walked into the studio, blasted some nonsense into the tapes, and metalheads looking for the next step in evil, Black Metal aggression ate it up.

What struck me the most with I.N.R.I is the obvious Death Metal influence which, considering Death's debut album Scream Bloody Gore was also released in 1987, seems like some pretty cutting edge genre fusion. I'm not sure how much of it was intentional, but the guttural, deep growls on this record honestly would feel right at home in some of the more Brutal Death Metal records of today. Even though I would hesitate to call them well done, they definitely fit into the unhinged feel of the whole record. Most of I.N.R.I. is a flurry of blast beats and thrashy tremolo riffs that oozes old school Black Metal personality but loses itself in the actual performance aspect of the whole thing. "Satanic Lust" starts out well enough with a decent main riff and a barely audible but cool solo amidst all the yelling and cranked up snare, but Sarcófago never really get back to that same kind of riff focused songwriting, preferring a more chaotic approach to the rest of the album. "Nightmare" is a decent attempt at the slower, more chuggy style of early Black Metal that Bathory was well known for and the ending of "The Last Slaughter" is especially brutal, but the rest of the album is varying shades of the same drumming and riffing with some interesting vocals here and there.

The mixing on the drums absolutely ruins most of the positive things I could say about this album, with the snare and bass combo being five times as loud as anything else. I can see how fans of the extremely raw and brutal kinds of production gravitate towards this, but the incessant pounding of the same patterns under similar riffs doesn't really do much for me. At the same time, I.N.R.I. has way more charm and personality than some of the other early Black Metal albums I've heard. The closing track makes me think that this album isn't meant to be taken that seriously, along with some truly classic lyrics on "I.N.R.I." and "Christ's Death", but at the same time these guys really left nothing on the table as they channeled as many extreme metal influences as they could into one short album. Despite all its flaws I think this classic release has some charm that I wasn't ready to admit when I first heard it. It's raw in a way that didn't exactly age well on the surface, but the possibly unintended passion behind an admittedly less than mediocre album somehow won me over in the end.

I was only a very young chap when I first encountered seminal Brazilian black metal outfit Sarcófago back in the early 1990's. I'd begun tape trading with a South American kid who possessed a comprehensive list of his local product & I subsequently received a long procession of underground stuff from him in the mail over short period. Amongst that lot was a whole bunch of Sarcófago material & I can distinctly remember having my mind blown by just how raw metal music could get. It was very much a novelty for me at the time & it's understandable as to why I felt that way when I return to their debut full-length "I.N.R.I." in more modern times. Sarcófago took influence from several of the most extreme forms of music of the time & ramped them all up to eleven, all while still learning to play their instruments. But any experienced fan of South American extreme metal will tell you that these technical inadequacies & the general naivety of the song-writing are a big part of the attraction with this style of music & that's never been more evident than it is with "I.N.R.I.". It's full of out-of-time blast beats, silly monster noises & incompetent guitar solos but I'll be fucked if these "qualities" do anything to tarnish the album's appeal. It's simply a really fun listen & shouldn't be taken as seriously as many kvlt black metallers seem to.

Thankfully the production is clear enough so that you can easily make out all of the instruments. The snare drum is ridiculously loud but that has always been a common trait of South American releases. The influence of hardcore punk on Sarcófago's sound is obvious & it gives them a formidable energy that borders on being infectious. I do really enjoy the aggressive vocals which give the album a darker feel & helps it to overcome the fact that the instrumentalists are struggling to hold everything together beneath them. You'll often see people tossing around the thrash metal tag with "I.N.R.I." but there's very little legitimate thrash on offer if you look closely. This is pure black metal bordering on the more modern war metal movement that Sarcófago were such an key influence on. Early Sodom & Hellhammer are the most obvious influences in my opinion but the early Brazilian releases from Sepultura & Vulcano are also good points of reference, not to forget the hardcore & early grindcore elements.

This all amounts to a consistently enjoyable listen that never borders on being life-changing but is ultimately fit for purpose when searching for the ultra-kvlt & super-raw release that defines what it meant to be underground in the mid-to-late 1980's. I undoubtedly have a bit of an emotional attachment to Sarcófago given my history with them at a very impressionable time in my life but if I try my best to put those feelings aside I still can't seem to shift the adrenaline rush they give me. There's a purity to the primitive packaging & delivery that seems to transcend the technical deficiencies & this was the flame that the early black metal scene found so attractive. If you're into modern black metal then you owe it to yourself to at least have an understanding of what "I.N.R.I." was about & the impression it left of the metal underground. I can't say it'll ever sit amongst my all-time favourites but I never regret my occasional revisit.