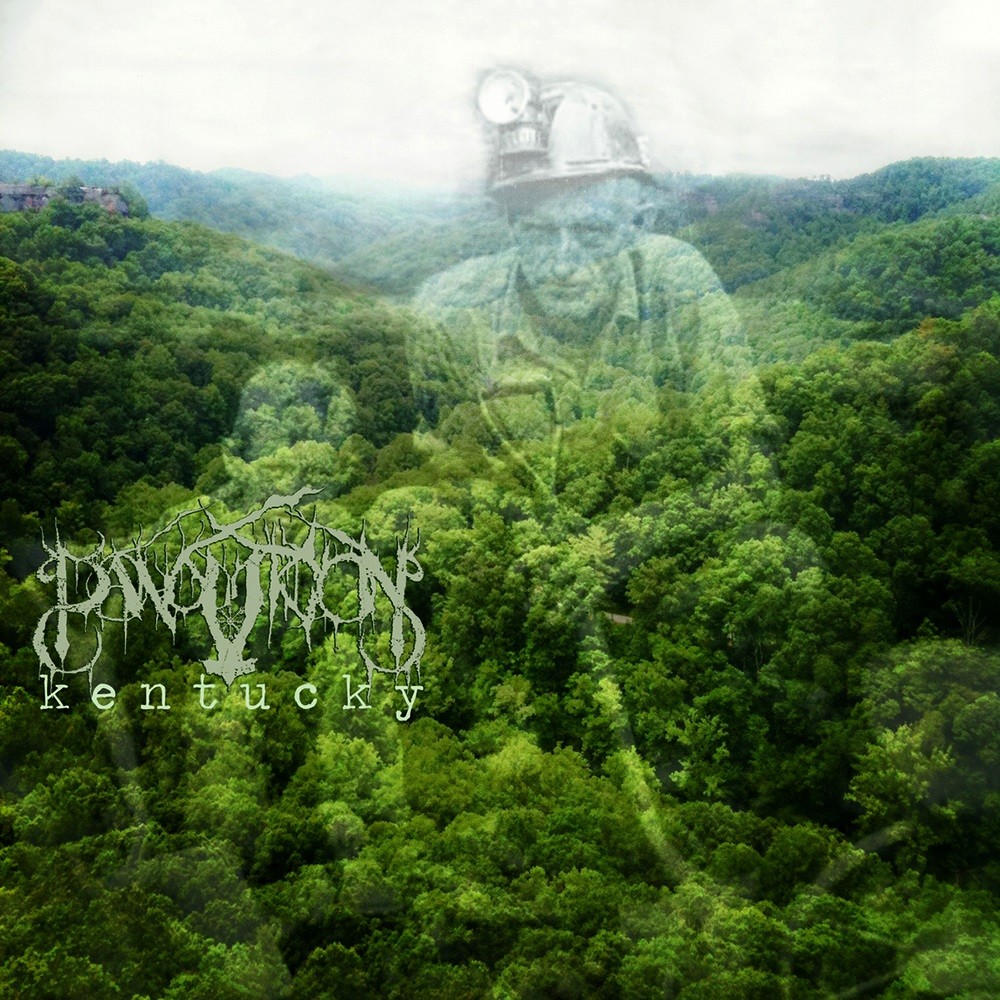 I think it's fair to say that "Kentucky" was never going to be something that I'd claim to be right up my alley but that's not to say that it's a bad record by any measure. I actually quite liked it in the end but there are a few things that hold me back from getting too excited about this coal-mining themed one-man black metal experiment. It's not a very dark black metal record with some of the more melodic sections possessing an atmosphere that glistens with a positivity that wouldn't feel out of place on a blackgaze release while the mining themes don't really seem to fit all that well within the context of such a cold, primitive & raw style of extreme music if you ask me. The other major obstacle I discovered is that the first few tracks do very little for me so the album doesn't really get going until track four in my opinion. That poor start meant that my first listen was a bit of a write-off as I was already pretty disappointed by track four & subsequently didn't allow the remainder of the record a decent chance of recovery. A couple of revisits have since seen me overcoming that issue & I've found that I actually get a fair bit of enjoyment out of tracks 4 through 9, particularly "Black Soot & Red Blood", "Killing the Giants As They Sleep" & "Black Waters" which are all very solid pieces of work in their own right.

In saying that though, I'm definitely not onboard with the few sections that see an instrument that sounds very much like a pan-flute or a recorder being poorly amalgamated within an extreme metal framework. That shit just doesn't sit all that well with this old metalhead but thankfully those parts are generally short-lived & are often followed by some of the better sections of the album. There's a strong post-rock influence scattered across the tracklisting too & those sections clearly sit amongst the most impressive parts of the record for me as I'm quite partial to an introspective interlude or two in my extreme metal. The vocal shrieks aren't amazing & some of the instrumentation isn't as polished as some but there's a good energy to a lot of the more brutal sections & the solemn bluegrass pieces are well executed & generally offer a depth, authenticity & integrity that allows them to feel more substantial than anything you'd find on your run-of-the-mill folk metal release. In fact, the consistent inclusion of folk music on this album initially left me confused as to why "Kentucky" is rarely labelled as Pagan Black Metal but I've since realized that it's the subject matter that's the roadblock there.

I think it's fair to say that I found "Kentucky" to be an intriguing if not all that enticing prospect on paper but hindsight has seen me admitting that it's over-achieved on its promise in practice. I'm not sure it's the type of thing that I'll be returning to all that regularly which mostly comes down to taste but it certainly has some artistic merit & deserves points for effort & ambition as much as anything else.

For fans of Saor, Wolves In The Throne Room & Skagos.

I remember quite vividly the night when one of my college roommates introduced me to Panopticon in November of 2015. As I was still quite a noob to extreme/black metal at the time, I recall listening to Autumn Eternal a good three times consecutively as I was sucked in to the impeccable pacing, songwriting and production. I almost instantly went back and checked out their back catalog; most notably, 2014's Roads to the North and 2012's Kentucky.

What I was so impressed by was Austin Lunn's pacing. While this is certainly in the mold of atmospheric black metal, and technically that genre tag incorporates at least half of this album, Kentucky is far more elaborate than other black metal albums. The album has numerous interludes and full tracks of bluegrass inspired tones that would be very familiar to someone living in the state of Kentucky. Songs like "Come All Ye Coal Miners" and "Which Side Are You On" are interpolated from American folk/protest songs and serve as beautiful changes of pace and refrains before the blast beats, tremolo picking guitars and howling vocals return. Furthermore, the black metal tracks each have their own unique Americana interludes on "Bodies Under the Falls" and "Black Soot and Red Blood". And while they do sound gorgeous on their own, they do feel more like asides rather than a continuation of an idea.

And this has been one of Austin Lunn's biggest issues as a musician since I discovered them. At first it never bothered me, but as time passed, and I was introduced to Saor, I found that the folk elements were far less developed. Not only is the folk instrumentation of the lap steel guitar not incorporated into a black metal framework, but from a songwriting point of view, the way in which songs will drastically change tempo's and styles without preparation make the track "Killing the Giants as They Sleep" feel less rewarding of its extended runtime. I would have loved to hear Austin Lunn create a soundscape that uses both and have them take place simultaneously. And this is still something that I would love to hear to this day.

The production of this album is splendid. Can we all take the time to appreciate how full the bass lines are here? "Black Soot and Red Blood" is such a driving track where the tremolo guitars are not doubling as bass notes, giving it more gravitas. Carrying off of that, the lead guitars are where this album does most of its heavy lifting as they provide most of melodic leads, which can be quite sticky in the case of "Bodies Under the Falls". I am not the biggest fan of the out of tunes flutes that appear on some of the black metal tracks. The vocals are some of Austin Lunn's most pronounced in all of Panopticon's discography...and yet they still feel muted. Of course, this is really that big of a deal as this album contains a number of spoken word interludes that help tell its tale. Even without the words, you can tell this severity of the content just by how aggressive the music sounds. As for that content, I'm not going to go into too much detail, but while me and Austin Lunn have very, VERY different opinions on the topics of unions, I commend Panopticon for standing up for a group of people who have been disproportionately affected by poor wages, especially given their unsafe work environment...kind of like nurses in hospitals right now.

What a treat this record is! It is so dense on multiple levels that me trying to explain it all will take a few hours. I can only hope that this short little diatribe is enough of a recommendation to check out Kentucky. It is a marvelous album that feels progressive, but still firmly in its roots. It sounds amazing, and the content is superb. In hindsight, I would still hold this album back from the great Saor albums like Aura and Guardians, but among Austin Lunn's work, it is some of the best.

Kentucky gets touted as the "breakthrough" release for Panopticon but I have to say it has taken me a good near decade to get to grips with it and its combination of folk, bluegrass and black metal elements.  Without going into too much detail, if the album cover doesn't give it away, the subject matter for the album is the labour struggles in mining in (fittingly) Kentucky with a heavy focus on the film-documentary Harlan County, USA from which many samples are used to great effect.

It is a challenge to get the balance of samples right in a record.  They all too easily clash in my experience and can quite quickly become a distraction that detracts from the music itself.  However, Panopticon give a masterclass in the application of the samples here, using the black metal elements to give them a real sense of drama and the bluegrass and folk elements to underline the real human aspect to the stories also.  As such it is an album you feel compelled to listen to in its entirety in order to do both the record itself and the stories real justice.

The styles of music all have a relevant place here and all are firmly placed across the record with 3 tracks being folk covers and 3 being predominantly black metal (Black Waters sits as some ambient track towards the end - again adding depth; some reflection as the album draws to a close).  This combination of genres works well overall on the album as a whole but on individual tracks the transitions don't always feel they are executed cleanly and whilst never sounding clunky as such they do keep the record off full marks on the rating.

For such a passionate subject matter there's a feeling that the storytelling is done sensibly and the album feels that more sincere and authentic to the cause as a result.  It's sparked an interest in me to go and watch the documentary and learn more which is what good music should do I suppose.  My initial reservation some ten years ago upon first hearing this seems nonsensical now and is evident of my lack of musical maturity at the time because overall this works and is one of the few albums in recent years i have truly connected with.