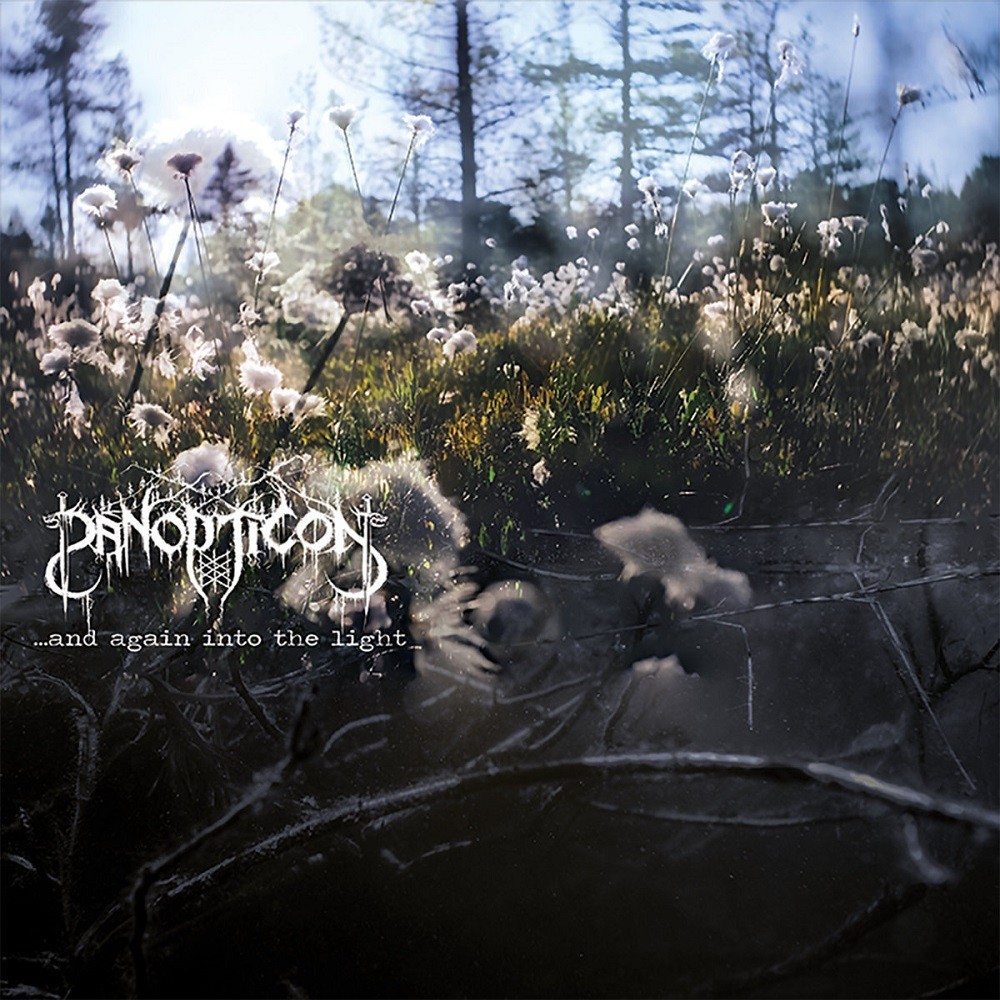 As we get into October, I have already mentioned that I am in an unusual “mop up” phase of picking up on some key releases I have either missed or am yet to get around to listening to. One of the glaring holes in my year thus far is the latest release from Austin Lunn under his Panopticon banner. It is worth mentioning that I am still several albums light from Austin’s back catalogue and so I don’t have the luxury of being able to judge his latest offering in comparison to other more recent ones. There are most definitely some differences and enhancements to the sound on …And Again Into the Light, the majority of these being positives. As Sonny alludes to, if you have found a lusher and richer sounding album this year then you have done very well indeed.

Panopticon has managed on this latest offering to pose an incredible balance of the melodic and accessible sounds we know is within his repertoire already with some of the heaviest and alienating black, death and doom metal at the same time. It plays as a single entity still though, despite all these nuances that I mention it is not an album of two halves or individual thirds even. The tapestry that gets displayed over the eight tracks is vast but incredibly visual as well; unafraid to show his wares to all and sundry, Austin Lunn really does expel every drop of his creative and artistic ability on his tenth full-length.

I will drop in an early criticism which may iron itself out with yet further repeated listens, but the vocal mix here is not right on a few tracks where the harsher and scathing black metal attack is raging. I am used to vocals sitting behind other instruments in extreme music, but these fall into the category of being buried by everything else at times. Not that I am here listening to the album looking to follow the lyrics word for word, but there are times when I must check if they are the vocals are their or not. Their haughty breathiness is a great fit for the aesthetic, but the delivery is ever so slightly off for me.

Now we have the one negative out of the way let’s get back to the brilliance of …And Again Into the Light. There is no doubt that this album remains an absolute triumph both as a standalone release in 2021 and as an addition to an already great discography. The balls required to open any album with an acoustic number are owned by someone with real confidence in their own ability and that there will be a connection with the audience instantly. The album itself does not drop one heavy note until around a third of the way through the second track and goes from a four-and-a-half-minute opener into a near eleven-and-a-half-minute epic before we have even gotten to unlocking the remaining six tracks to come.

The heightened since of frenzy and tension that A Snowless Winter builds into in the centre of the track-listing gives the album a real spur at the midway point as it then dives into the cavernous death metal style of Moth Eaten Soul which is perhaps the heaviest thing I have heard Lunn perform to date. Yet even during the albums heaviest and inaccessible tracks there remains a real sense of melody and rhythmic structure to hold the attention superbly. There are parts to the aforementioned Moth Eaten Soul that make me feel it might be the best death metal track of 2021.

Although not as abundant as in other releases, elements of folk and bluegrass do still flourish on the album. This time around the emotion that drives the song writing has seen a much more aggressive sound with a doom-like density applied to the whole album but the snippets of the more roots-laden music act as palate cleansers (or appetiser in the case of the opening track). I think the direction of Panopticon in 2021 is just superb though and if Lunn can continue to write such challenging and frankly raging extreme metal then long may it continue. Equally, the exuberance of tracks like The Embers at Dawn are so absorbing in their ethereal beauty that some of the most soothing music of 2021 for me also exists within these eight tracks.  Again, the build on this track in particular before it becomes a blasting bm piece is excellent and heightens the sense of tracks always developing and flourishing.

Despite closing with two twelve minutes plus tracks, I sit right to the end of the album. I find I am just as eager to get to the next track as I am to uncover the detail of the current one playing at the time and there are very few albums nowadays that can hold that excitement for me. This has shook up my end of year list quite substantially.

For the last decade, since the release of Kentucky in 2012, Austin Lunn, in his guise as one-man project Panopticon, has been one of, if not THE most consistent performer in black metal, with six full-length albums and a number of eps and splits of absolutely stunning quality. He is also the only exponent of note in the niche sub-sub-genre of bluegrass and americana-influenced atmospheric black metal, probably because he is just so damn good at it that, even in these bandwagon-jumping times, nobody dares compete head to head with him for fear of being exposed as massively inferior talents.

His latest full-length, ...and Again Into the Light, has well and truly got it's claws in to me and is easily my most played album of recent weeks. As the man himself points out, this is Panopticon's darkest and heaviest release so far, even withstanding the gorgeous melancholy of the folk-centred passages. Austin explains in an interview on Bandcamp "This album is intensely personal, dealing with many different subjects but all related to loss and trauma" and continues, "The album is full of atonement, apologies, and growth. Like many things in life, the process is ugly, but the hope is to arrive at better versions of ourselves in the end." This accounts for the sadness that permeates the folk sections, but also for the brutality of some of the heavier parts as the ugliness of the process he describes is leant a voice by his powerful riffing and savage vocals (although the latter are somewhat buried in the mix).

The album begins with the gentle sadness of the title track, the violin that is prevalent throughout the album only serving to increase the wistful melancholy of the track's atmosphere as Panopticon ease us unsuspectingly into second track Dead Loons which, after a pensive first three minutes, suddenly transforms into an almost funeral doom-like dirge before really letting loose and exploding into a pummelling, pounding runaway train of a black metal riff and features some of Austin's most flamboyant soloing, although true to the man's humility, it is buried a little in the mix almost so as not to detract too much from the song's effect.

Rope Burn Exit and A Snowless Winter are amazing wall-of-sound epics that blast and heave and threaten to blow you away with sheer aggressive force like some almighty sonic hurricane. Then comes Moth Eaten Soul which is probably Panopticon's single heaviest track to date, drawing on death metal influences to increase the aural savagery that the music visits upon your now battered eardrums. This is an almighty beast of a track that opens up a new direction for the band as he explores a heavier and more brutal side of his musical persona. This savagery is followed by the album's gentlest couple of minutes as we take a short breather with As Golden Laughter Echoes which leads into the album's most heartfelt track, The Embers at Dawn, featuring clean vocals from Erik Moggridge, fresh from his collaboration with Bell Witch, and harsh vocals from Waldgeflüster's Winterherz. The build-up is gorgeous and the release as the wave breaks is almost orgasmic in intensity. The album closer Know Hope is an epic that begins as savagely and aggressively as other tracks here, but eventually resolves itself to embrace the hope of the title and to end the album on a positive note.

This is an album from an artist who is absolutely at the top of his game and who has an uncompromising view of what he wishes to convey in his music, having the confidence to embrace new modes of expression as well as honing his more usual methods to an absolute cutting edge. If I hear a better album released this year then I will consider myself very fortunate indeed.

It feels like ages ago since I discovered Panopticon with their 2015 album Autumn Eternal and how in my early days of exploring the world of black metal, I finally found my niche; this branch of atmospherics to go alongside some gorgeous songwriting, well placed nature interludes and production that is as dark and gritty as the cold as the OG’s of the genre. However, in the years following, I have kind of developed a musical crush for Andy Marshall and Saor and how well that group is able to take its folk roots and implement them effortlessly into the black metal timbre, as opposed to Austin Lunn, who keeps these touches separated.

When I listened to this band's 2018 album The Scars of Man on the Once Nameless Wilderness, I was a little bit surprised to see Panopticon attempt a full on folk record with its second half. It would be intriguing if those lessons were brought forth on this new album. And part of me wants to say that it is, but another half says that ...And Again Into the Light is more comfortable trying to recreate what made Autumn Eternal so great. And believe me, this album is great, but I do not put it amongst the best that Saor has to offer, or even other Panopticon albums.

And the folk elements are where this album has problems. I already mentioned how most of these elements feel reserved for cooldowns and moments of reprieve before more blast beats, tremolo picking and the vocals. But I personally feel like this album does not fully grasp the Americana sound. Songs like “Moth Eaten Soul” and “Know Hope” have the soaring string sections that hover over the atmo-black passages, but they sound far more European centric than anything American. The lap and pedal steel guitars are always welcome during the albums title intro as well as the interlude “Her Golden Laughter Echoes”, and I wish that Panopticon could have incorporated it more frequently.

Beyond the songwriting, iit does have the distinctive feel of a Panopticon record. It takes a while to find its groove on the second track “Dead Loons”, but once it’s moving, there are no bathroom breaks the rest of the road trip. And like with most Panopticon records, the vocals are so reserved in the mixing that you would be forgiven as to why there were even vocals at all. But like with the last album, Panopticon have gotten on board with the heavy environmentalist dialogue that plenty of metal bands (i.e. Gojira, Wolves in the Throne Room, Between the Buried and Me, etc.) have been espousing recently.

And if there is one thing that Austtin Lunn has been strong at for years now, it has been this. And while the vocals are severely lacking in punch and gravitas in the mix, the heaviness of the instrumentals implies all you need to know. I just wish that Panopticon would take their love of folk and americana music and incorporate it more liberally into their music. I know it can be done and Lunn is one of a handful of individuals that I can think of that could pull this off.