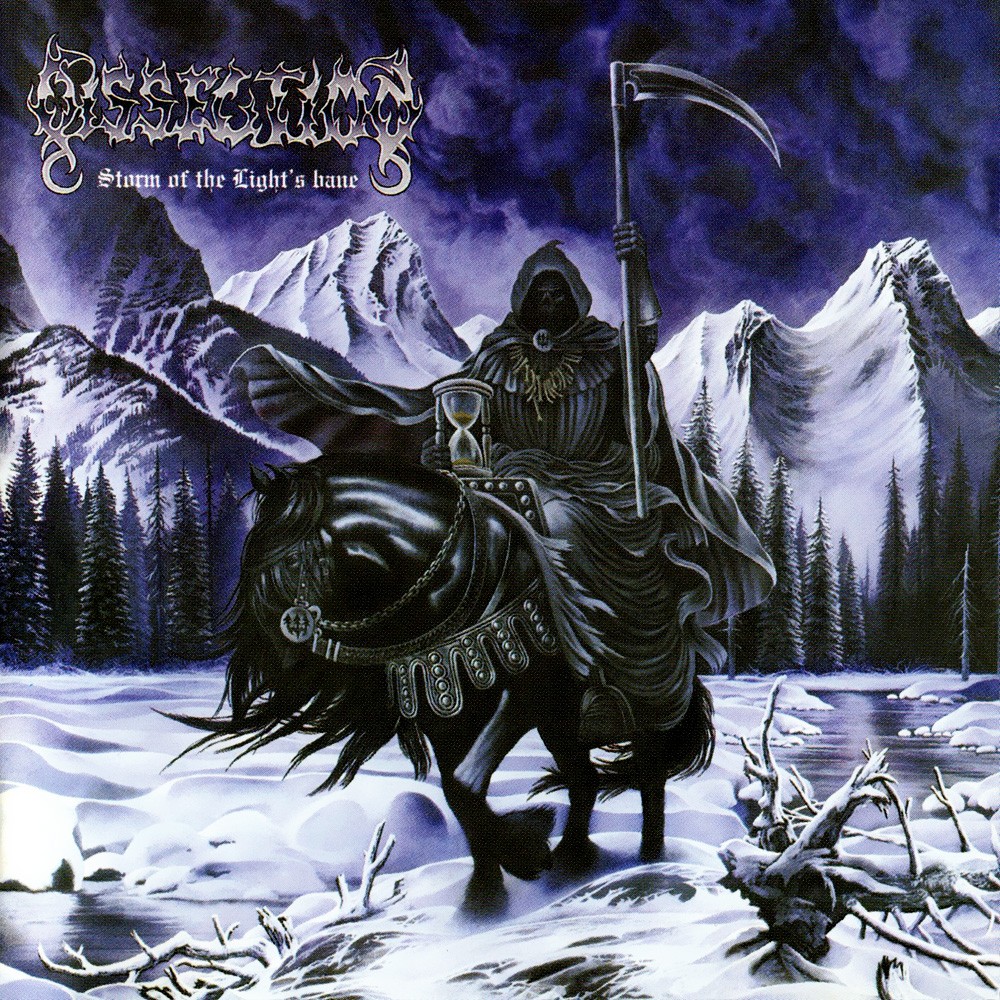 Dissection achieved perfection with this release. An icy, melodic masterpiece that upholds the spirit of black metal.

One of the reasons I love Rate Your Music so much is because it's so damn reliable. Of course there are times when I find it difficult to understand why a particular album rates so highly, but more often than not, the sheer number of ratings for each album combined with Sharifi’s tinkered Bayesian formula means top twenty charts for most genres are pretty hard to argue with. Dissection's Storm of the Light's Bane is a perfect case where the masses have voted and the results speak for themselves. This album not only sits atop the melodic black metal subgenre chart, but it currently holds a top three position for the entire black metal genre. Considering the almost endless black metal albums out there, plus the fans dedication and obsessive nature (myself included) towards this wonderful form of musical darkness, this is quite an achievement to say the least. The Somberlain took the black metal blueprint and infused it with melody at a time where this was almost unthinkable. The reason Dissection were so successful at this task wasn't simply due to technicality or catchiness, although both of these features were present. Their triumph came because they managed this concoction without losing any of the unadulterated malice or darkness that black metal requires. They opened the eyes of multitudes of fans and musicians that black metal had a future with diverse dimensions that could be achieved without ever disregarding the very spirit of the genre.

Storm of the Light's Bane exceeded their pioneering debut in almost every facet, simultaneously producing the very apex of melodic black metal that to this very day hasn't been surpassed by any other album. One of the features of The Somberlain that I thought held it back from perfection was the use of John Zwetsloot’s classical guitar interludes. They were pleasant enough I guess but they felt more than just a bit out of place positioned between such darkly atmospheric black metal tracks. His absence from Storm of the Light’s Bane (he was replaced by Runemagick’s Johan Norman between albums because he lacked the commitment the band required) was still concerning though as he was undoubtedly vital in the development of Dissection’s melodic sound. As it turned out I got the best of both worlds, as not only were the cold harmonies still intact, but the more acoustic elements were now seamlessly mixed into the black metal, giving the album greater flow and keeping the blood pumping for the entire running time. The other obvious area of improvement is on the production side with the drums in particular having vastly superior sound that's perhaps a little less organic, but much more powerful in the long run. If you play The Somberlain and Storm of the Light’s Bane back to back, it’s not hard to appreciate the step up in clarity and precision that signing with Nuclear Blast accomplished for Dissection prior to recording.

Storm of the Light's Bane is an album of immense conviction that remains just as entertaining and thrilling today as it did when released in 1995. It deserves all the praise that’s been thrown at it over the years and will always hold a very precious place in my personal music collection. There are really only six full tracks to experience (which are neatly bookended by an appropriately foreboding distorted intro and a haunting piano outro performed by Alexandra Balogh), yet every single one of them is brilliantly executed and intensely captivating. Picking highlights seems a shame but I can’t go past Night's Blood, Unhallowed, Thorns of Crimson Death and Soulreaper as the pick of the bunch. Of course I'm most likely preaching to the converted with this review, but if there are any remaining black metal fans (or death metal fans for that matter) out there yet to experience Storm of the Light’s Bane, do yourselves a favour. Run out and grab it, lock yourself in a dark room, and let Dissection's icy genius cleanse your soul of all that disagreeable piety. Just as with The Somberlain, the version to track down is the two disc edition released by The End Records in 2006 that not only contains the Where Dead Angels Lie EP from 1996, but also includes an alternate mix of Storm of the Light’s Bane, completely remastered from the original master tapes by Håkan Åkesson at Cutting Room Studio, Stockholm.

For better or worse, I love melody in my Metal music. Pure, unadulterated aggression has its place and I'm a huge fan of it under certain circumstances, but at the end of the day I value a massive and memorable riff with a distinct beginning and end rather than a one-note onslaught of palm muted brutality. Black Metal has been a driving force that guided me away from cleaner and more progressive genres of Metal and into the pits of more extreme Metal genres because it can sit so perfectly between being relentlessly brutal and intriguingly complex. The blast beat drumming and higher-toned tremolo picking can be brutal, but also peaceful and atmospheric. Long story short, Black Metal has a ton of layers to it that have been explored over the years, but Dissection's Storm of the Light's Bane may have the best mastery over the most layers I've ever heard.

Hailing from Strömstad in Sweden, Dissection were active directly in the middle of the Melodic Death Metal uprising at the hands of At The Gates and Dark Tranquillity releasing their cornerstone albums in 1995 and In Flames releasing theirs shortly after in 1996. Due to music being pretty insular back then, it's no wonder that an upcoming Swedish Black Metal band would pull influences from what was around them, causing them to release a more Melodic Death Metal tinged form of Black Metal that is so cleanly performed that it's honestly hard to fully explain. Despite being slightly lacking in certain early Black Metal elements like lo-fi, grindy production and incessant blast beats, Storm of the Light's Bane still feels like a full fledged Black Metal release with its harrowing and icy atmosphere. Tracks like "Unhallowed" and "Soulreaper" dial the speed up to acceptable 90's Black Metal levels all while adding their own unique flair, like the layered acoustic guitars on "Soulreaper". None of these additions take away any of the energy and, if anything, they all add to the experience by giving the listener a new spin on something they've heard before. While the Black Metal segments of this album are top notch, Dissection went above and beyond adding other styles and influences that actually make sense within the genre.

The Melodic Death Metal influence in Storm of the Light's Bane is no secret, and that's why it's so phenomenal. Many Black Metal artists rose to fame due to their diligence to the purity of the Black Metal genre, delivering some truly chilling and chaotic experiences. While that's all well and good, lo-fi tremolo chord progressions behind ferociously quick drumming with chilling vocals and icy production styles can only be done in so many ways. Although I'm a big fan of Black Metal in general, I've always found the meat and potatoes of the genre to be pretty dull and normally look for bands that attempt to break the mold in interesting ways. Dissection decided that Black Metal tremolo needed a little bit more punch, so they added more melodic riffs that were more complex with their abrupt tempo changes and didn't sacrifice any amount of heft whatsoever. Not only is Storm of the Light's Bane a chilling Black Metal experience, it's a crushing Death Metal experience as well, with these two genres culminating together the best on "Night's Blood" as well as "Retribution - Storm Of The Light's Bane". The more melodious riffing is interlaced seamlessly into the more classic Black Metal riffing, and that goes for the drums as well, swapping between furious blast beats and slightly slower but more forceful rhythms to complement the ever-changing riffing. "Night's Blood", "Where Dead Angels Lie", and "Thorns of Crimson Death" even have a slight Folk Metal element to their melodies just due to their structure and the use of short but effective acoustic sections that break up the album in an unobtrusive way. It's incredible to hear so many different riff styles come together to form such a cohesively heavy and bitter product, all while having transitions that border on being magical.

Storm of the Light's Bane is the best of both worlds of Extreme Metal packaged into a unanimously incredible 40 minutes of high quality riffing, amazing song structure, and unbelievable usage of different genres and influences. It's been a long while since a riff has hit me quite like the first Death Metal drop in "Retribution - Storm Of The Light's Bane" or the many, many riff variations in "Night's Blood" did. While the vocals can be forgettable as a whole, they tie the entire album together neatly with their mid-range screaming quality that doesn't quite drop into Death Metal territory nor does it ascend to Black Metal shrieking. Add in the atmospheric intro track "At The Fathomless Depths" and the very pretty outro "No Dreams Breed In Breathless Sleep" and you've got a clear contender for one of the most unique and best crafted extreme Metal albums of the 1990's. Obviously more modern Black Metal bands have incorporated more clear riffing into their repertoires as time has gone on, but Dissection came out of the gates using the generally new genre of Melodic Death Metal in ways that still sound killer today. Storm of the Light's Bane is an essential milestone in extreme Metal and I can hardly think of a single complaint I would have with any of its choices, it's just that good.

Oh yeah, and this album has some other pretty damn good songs on it too. "Soulreaper" and "Where Dead Angels Lie" manage to hold their own and not be completely overshadowed by "Night's Blood" (a huge accomplishment), and are bona-fide genre classics in their own right. "Unhallowed" and the title track might be footnotes compared to those three or the stirringly sinister "Thorns of Crimson Death", but even they - the supposed weaker songs - still outclass 95% of metal! That's how great this disc is. No weak spots. No spots that are anything less that fantastic and timeless. "No Dreams Breed in Breathless Sleep" is my favorite instrumental outro of all time and caps the whole wintry experience off perfectly. It is haunting in its simple, melancholic elegance. This whole album is a masterclass in how to make music that is simultaneously sinister, beautiful, melodic, majestic, evil and heart-wrenching. And it contains both my favorite album artwork and extreme metal song ever?? Hellyes/10.