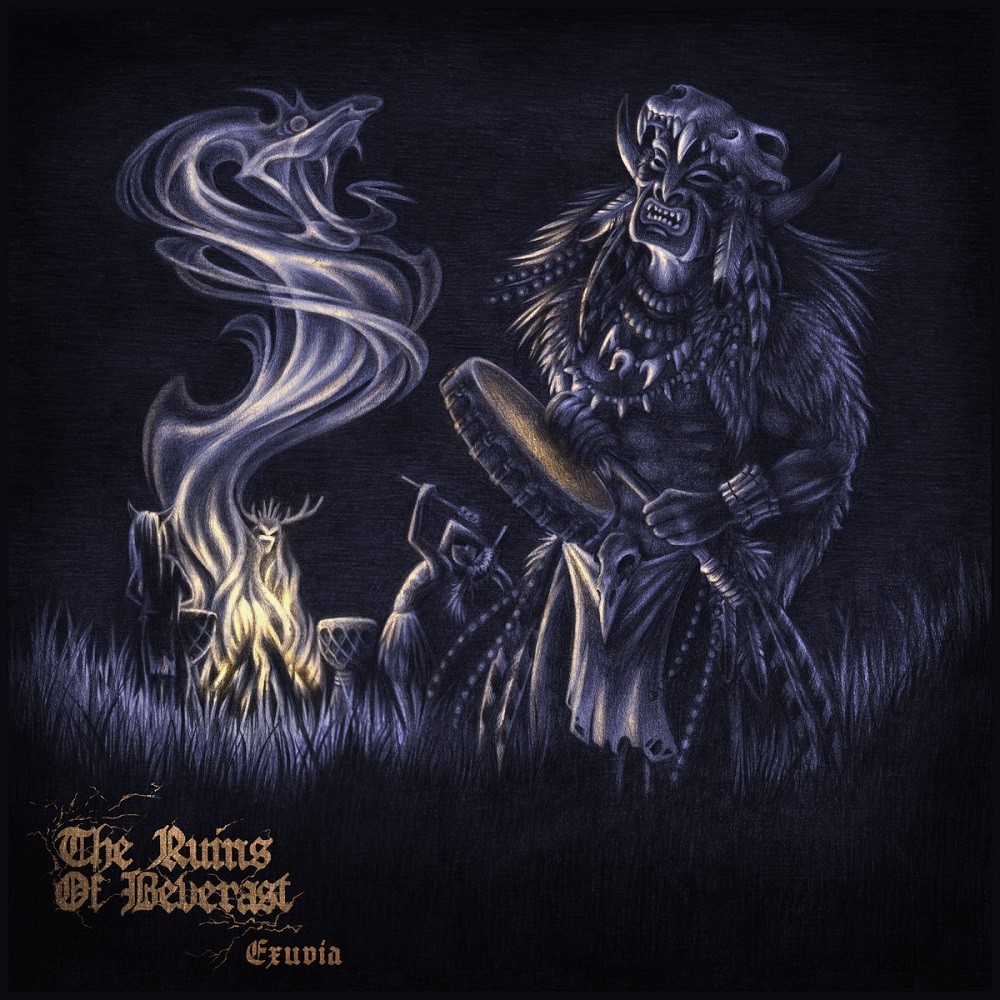 The Ruins of Beverast are a solo project begun in 2003 by Nagelfar's ex-drummer Alexander von Meilenwald after the band split in 2002. This is his fifth album under that banner, released in 2017 by Ván Records and featuring six tracks with a runtime in excess of 67 minutes (but don't most doom-based albums nowadays?) It is an album that melds several styles into a coherent and natural whole, be it death and funeral doom, atmospheric black metal or ritualistic tribal ambient stylings. The songs aren't of the kind that feature, say, a doom bit here, some ambient there and a bit of black metal tagged on for good measure, but rather, AvM skillfully forges the disparate parts into a single unique entity that flows organically, in interesting directions. The lyrics involve shamanistic exhortations and observations and are emphasized by the paganistic nature of the musical compositions to create an atmosphere redolent with the ritualistic practices of human pre-history, particularly accentuated by the drum patterns and subtle synth work.

As the listener, this album made me genuinely feel that I had been transported to another time and place and witnessed practices no longer remembered by modern man but buried deep within the psyche of all of us, maybe waiting to be reawakened by just such a piece of music. Definitely one of the more interesting and unique albums out there that should appeal to any fan of paganistic black metal or extreme doom metal (or anyone who just enjoys originality in metal music).

One look at the album artwork for "Exuvia" and you will immediately have a perfect visual representation of the music to come. The shamanic, ceremonial and spiritual theme to the cover is exactly what unfolds in the sounds from the off when you spin "Exuvia", which starts superbly with the title track. A blend of synth stabs, tribal drumming, ethereal vocals and rumbling darkness. It clocks in at fifteen minutes plus but never once gets dull or boring.

If you succumb to the meditative trance of track one you will be jolted back into this realm by the grandiose entrance of "Surtur Barbaar Maritime" for sure. Settling in to dissonant picks over almost industrial rumbling rhythm and cold BM vocals with well timed flourishes of more uptempo, yet still haunting, passages also.

It is clear that after just two tracks, "Exuvia" is a triumph of both design and content. I have but a few albums that are an actual experience beyond the auditory sense. There's a precision to this record, prevalent from the off. There's also a subtlety to proceedings too. Check out the clever build to the big finish of track two and then try and remember predicting it, before enjoying it being paired back ready for the haunting opening of "Maere (On A Stillbirth's Tomb)".

Ploughing along again with those industrial edged riffs and slow picked, haunting strings with the slightest of bend applied is again a mesmerising experience. Track three shifts like some dark matter growing out of the corner of the room, just as you imagine you have it's form registered it changes altogether to take on other shapes not of any earthly form. Here you'll find some of the cleverest use of pace committed to musical form as the ethereal female vocals return to enchant you further.

The hopeful sounding "The Pythia's Pale Wolves" doesn't disappoint as it starts with some demented, whispered babbling and slow, doomy riffs accompanied by bagpipes - fucking hell! Then there's some strange almost breakbeat run into the opening verse which fits superbly. For all the avant-garde elements to "Exuvia" it never strays to far away from what is at its very core a very sinister black metal album combined with lavish lashings of doom and industrial atmosphere for good measure.

"Towards Malakia" twists and contorts its way from a cacophony of heavy riffs, almost groovy doomy riffs and slow picked menacing strings to an almost plodding yet melodic interlude of muted hope in an otherwise grim and harsh existence.

There's no hiding from album closer "Takitum Tootem (Trance)". It's the culmination of a ritual of dark cinematic proportions. Rarely do albums close as completely as this does. All the parts of the record thus far return for a final assault on your senses as some closing ceremony to a truly unholy and richly dark set of games.

The outer skin (exuvia) that The Ruins Of Beverast cast-off during this six track masterpiece makes me wonder exactly what armour of brilliance and sophistication they are wearing heading into their next release. Shut those curtains, put on some candles and your best sacrificial robes. The Ruins of Beverast are back and your full attention is required.

Ruins of Beverast, The chronology