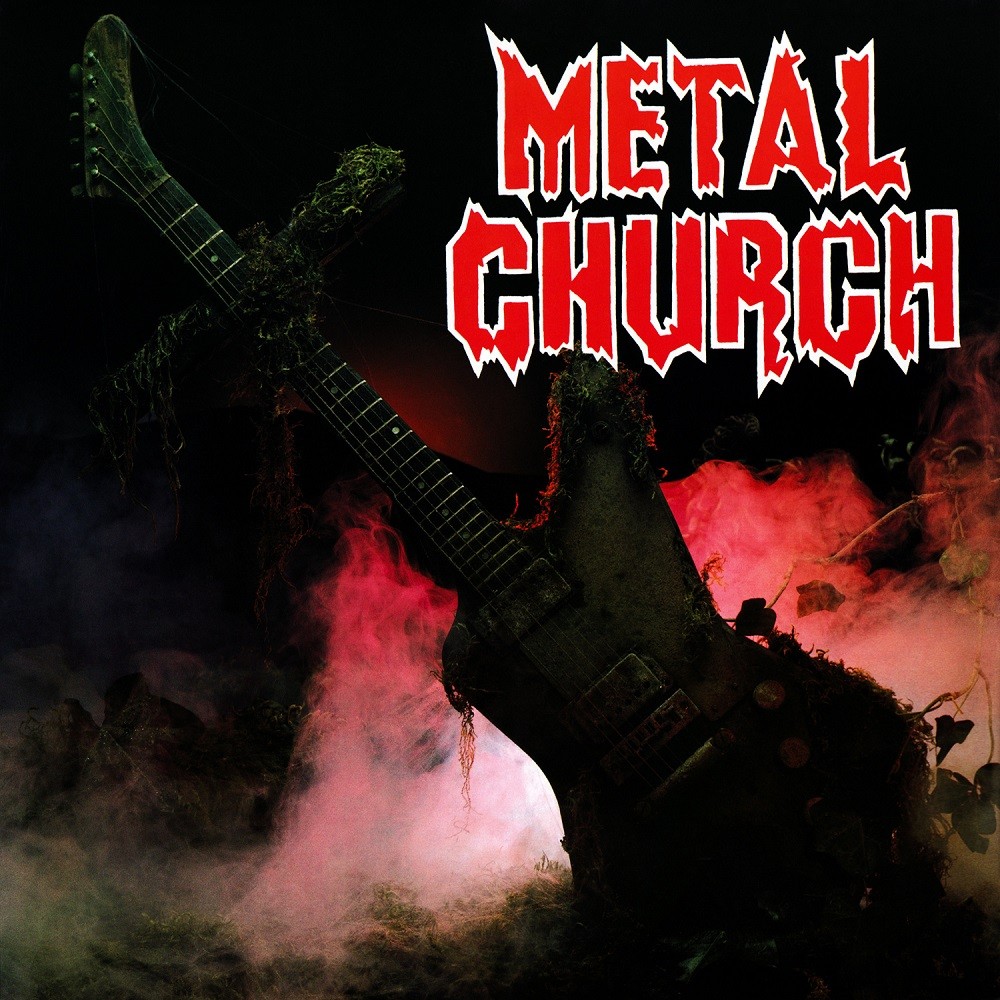 In the top twenty albums of all time that I have never understood the attraction of I would add the debut from Metal Church in the top five.  It does get oodles of praise and attention from virtually all corners of the known universe but I just don't get it I am afraid.  To start with, I have always found David Wagner to be overrated as a vocalist.  I mean his voice is unique most definitely, I have little grounds for argument there.  But it just lacks an real punch when needed (and the album needs a lot more punch in my book) to elevate the promise of an intense and raging metal album that rarely gets past growling stage.

The album opens with more than enough promise.  The big build up to Beyond the Black serves to lift expectations from the off but somehow it just peters out into a very mediocre and forgettable track.  The title track is guilty of pretty much the same thing, talking a good enough game to begin with but then delivering a half-arsed performance.  It is like all the good ideas were used up on intros to tracks instead of focusing on the long game.

There's not even any real dazzling leads or solos to look to for comfort that things are going to live up to expectations.  What few there are of these are average and far too obvious and predictable.  It is not to say that Vanderhoof and Wells are poor players though, I think the arrangements of the tracks themselves are off in the main and this kind of shoe horns their work in around twisted or poorly constructed songs.  Instrumental track Merciless Onslaught tries to showcase the skill on display but is just all a bit senseless as opposed to merciless.

The one track I find has any discernible form is side A's closer Gods of Wrath  this actually flows like all the other tracks should do.  With its mid-tempo and paired back feel the lead work really shines and the track feels that it has some overall direction.  Not even a cover of Deep Purple's Highway Star rescues proceedings as the band try to close the record out with a bit of style.  The effort feels forced and rushed, like the track itself is forcibly taken out of context as opposed to the band putting their own stamp on it.  Very overrated record.

Metal Church's self-titled debut is one that you're just as likely to find in thrash metal lists as traditional heavy metal, and listening to it, it's easy to see why. Both why it gets lumped in with both styles, and why it appears in so many quality album lists!

For me, this one's classic heavy metal, but they make things nice and juicy by merging the core NWOBHM-influenced style with the razor-sharp edge and darker tone of emergent thrash metal. The end result is something catchy and varied in pace, but with loads of force behind its blows.

We have a number of songs dealing with darker themes, be it the splatter movie lyrics of "Nightmare" or the grim and effective lyrics of "Beyond the Black" painting a post-apocalyptic landscape; here, rather than glorifying the conflicts, we get a depressing picture of the impact of warfare:

There are also plenty of doses of speed in here, with tracks like instrumental "Merciless Onslaught", the aforementioned "Nightmare" or their deliciously sharp cover of "Highway Star" all hewing close to outright thrash. The title track tells its dark tale of the eponymous Metal Church with a stoic, determined march, emphasising the inescapable nature of it all.

If you fancy some classic metal with a bit more of a sinister edge to it and some glimpses of speed metal's shift into outright thrash, Metal Church's debut is a great example chock full of solid numbers.

A classic lightweight thrash metal album that can't quite make good on some impressive early promise.

Metal Church didn’t do things the easy way. As with so many bands back in the days before the Internet made overnight stardom and self-produced money-makers a reality, Metal Church would go through various incarnations and release numerous demos over a four year period before gaining the right to release an album. Originally formed in 1980 in San Francisco (under the name Shrapnel) by guitarist Kurdt Vanderhoof and friends, the first year of the band are only notable for the fact that Lars Ulrich (from Metallica) rehearsed with the band a few times before amusingly not making the cut. After a few long lost demos, Kurdt eventually moved to Washington State in 1981 where he joined forces with Craig Wells (guitar), Mike Murphy (vocals), Tom Weber (drums) and Duke Erickson (bass). It wasn’t long however before Tom and Mike were replaced by Kirk Arrington and David Wayne respectively, and this line-up released a demo called Four Hymns around the same time the bandname was changed to Metal Church. This demo included the likes of Gods of Wrath and Battalions and its success was enough to convince the band that they were ready to record a debut full length release. Incredibly, the resulting self titled album would not be picked up by a label until James Hetfield and Lars Ulrich convinced Elektra to do so, after the band had sold 70,000 copies on their own.

It took me a long time to give Metal Church a chance to win me over. Gaining entrance to the world of metal through the likes of Metallica, Slayer, Kreator, Megadeth and Testament, I kind of skipped the heavy metal stepping stone (with the exception of Iron Maiden) that many youngsters took back in the eighties on their way to more extreme forms of music. What I didn’t realise at the time was that Metal Church’s debut album was considered a classic not only in the world of heavy metal, but also amongst the thrash metal crowd that I’d so snobbishly associated myself with. In hindsight, it’s not difficult to figure out why I passed the album over for the likes of Reign in Blood and Pleasure to Kill. The band moniker and album cover, complete with a Gibson Explorer shrouded in neon pinkish backed smoke, screams of more traditional metal at a time when I was busy hunting for the next level of brutality. When I finally bothered to find out what all the fuss was about (around a decade after its release), I was pleasantly surprised by not only by how much thrash Metal Church injected into their debut, but also how damn enjoyable the album turned out to be. That’s not to say that Metal Church sits comfortably alongside the previously mentioned relics of blasphemy, as this is a much more accessible and at times comparatively timid experience, but it’s one I regret disregarding for so long.

That being said, there’s no doubt Metal Church is top heavy, with the first three tracks setting a high standard that the rest of the album can’t quite match. Things get underway with the brilliant Beyond the Black, immediately showcasing an effective Iron Maiden-like gallop combined with more than a tinge of Overkill fashioned thrash. Speaking of Overkill, David Wayne’s high pitched vocals indeed bring to mind Bobby “Blitz” Ellsworth, with all the good and bad qualities that suggests. The second track keeps up the excellent work with a hugely memorable chugging rhythm, arguably making the band’s self titled track off their self titled album one of the highlights of their long career. Then there’s the three minute instrumental Merciless Onslaught, which is by far the thrashiest and most exciting effort on the release, successfully completing an early album trilogy of metal goodness. Unfortunately, the rest of the album slides away somewhat, with the lengthy Gods of Wrath ballad losing the momentum before some truly dodgy King Diamond impersonations all but destroying any impetus the likes of Hitman and In the Blood might otherwise have had. (My Favourite) Nightmare and Battalions do their energetic best however to recover lost ground with good success, at least making this renowned debut album a very solid and agreeable effort that should definitely be heard by all heavy metal and thrash fans that aren’t scared off by an amalgamation of the two. I think I initially was, but Metal Church went a long way to changing my mind!