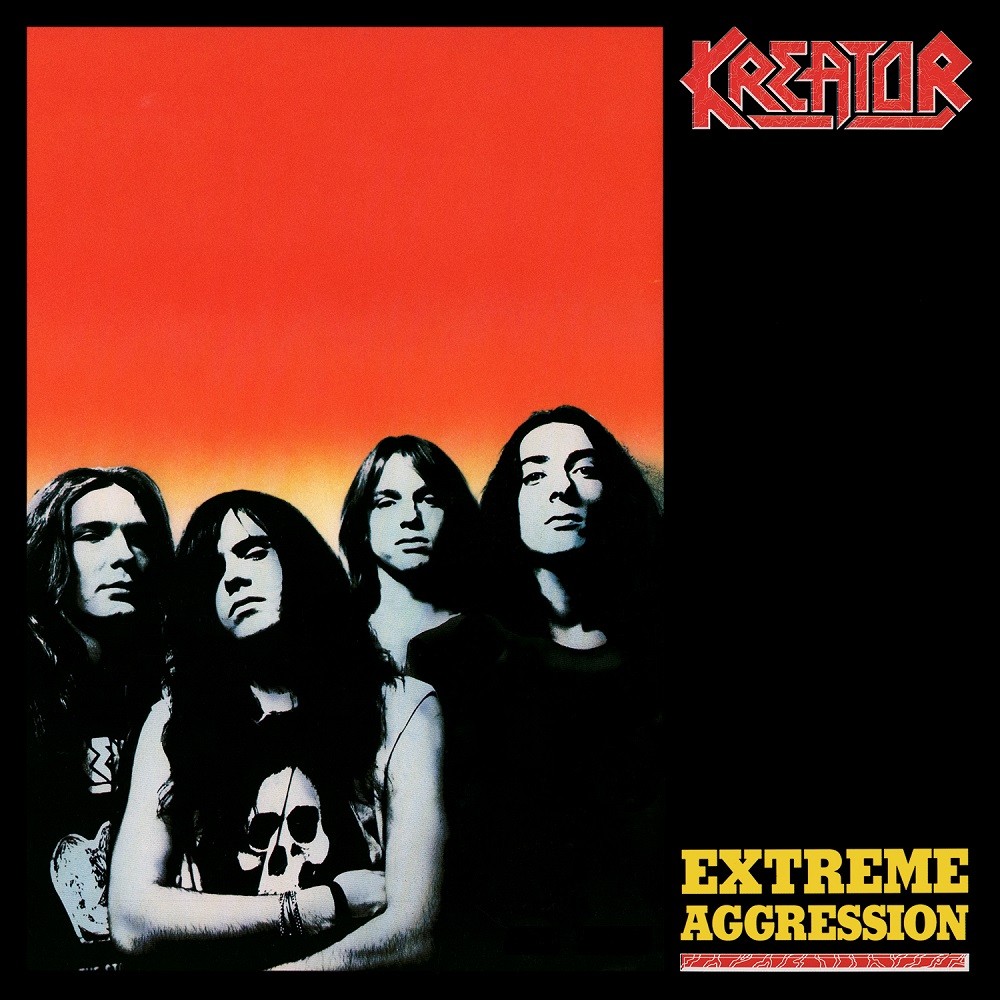 All Kreator's early stuff is highly recommended but I think it's Extreme Aggression that tops the lot in my opinion. By this stage they'd refined their sound into a still extremely aggressive (excuse the play on words), but less chaotic and better produced machine. There are so many classic tracks on here such as Extreme Aggression, No Reason to Exist, Love Us or Hate Us, Some Pain Will Last and of course Betrayer. It's difficult to give an album that contains all those cracking thrash tracks anything less than full marks, but I must admit that the last three tracks along with Stream of Consciousness don't quite meet the same high standard.

If you're new to Kreator, then this album, along with Coma of Souls, is a great place to start. The amazing thing is that they're still creating good albums almost 20 years later too!

"Extreme Aggression" was the release that introduced me to Kreator shortly after release & I frankly fell in love it right from the offset. To be more accurate, it was really the video clip for "Betrayer" that first brought them to my attention & it's still one of the greatest thrash metal tracks ever recorded in my opinion. I gave the album a right royal thrashing during the subsequent years & it held the prestigious position of my favourite Kreator record for an extended period there too. That being said though, it's been many years since I revisited it & after reacquainting myself with its wonderful follow-up record "Coma Of Souls" recently I thought it was time to see where "Extreme Aggression" sits in grand scheme of classic period Kreator after all these years.

"Extreme Aggression" is a very similar record to "Coma Of Souls" in many respects. It's an absolute riff-fest & a total thrash-a-thon! In fact, you'll rarely hear a record that better defines what late 80's European thrash was all about in my opinion as there's an nasty edge to the vocals, guitar tone & riff structures that makes Kreator infinitely cooler than the vast majority of their competition. The band had gotten significantly tighter by this stage too, particularly in the rhythm guitar & drumming departments. The guitar solos still spend a bit of time in off-key territory however it all sounds very cool indeed, even more so to an early teenage me.

The musical evolution that Kreator had started with 1987's "Terrible Certainty" has been further developed here with the band showing an increasing maturity in the song-writing department. Mille's newly acquired real-life lyrical approach would branch further away from the death-laden horror of Kreator's early works & I have mixed feelings on that. It's not a major concern but I do think his voice in best suited to sheer violence & blasphemy but he certainly makes a pretty good fist of the vocal hooks on offer here. The band show a great pedigree in not only thrash but also traditional heavy metal at times with an increased focus on guitar harmonies that reminds me just as much of Iron Maiden as it does of Metallica. Drummer Ventor can be seen to show a little more restraint than we were used to from his mid-80's efforts. Here we see him placing a lot more emphasis on the song-writing by picking his moments more selectively. He'd further refine that technique (not to mention his technical skills) before the recording of "Coma Of Souls".

There are no weak songs included. "Don't Trust" is clearly the weakest link however it's still quite enjoyable thanks to the previously-mentioned quality of the riffs. The rest of the album is absolutely top notch though with four of the nine tracks reaching genuine classic status for me. The one-two punch of "No Reason To Exist" & "Love Us Or Hate Us" pretty much rewrites the manual on how to write a great thrash riff while the two-track run of "Some Pain Will Last" into "Betrayer" is as devastating as any in the band's discography. "Some Pain Will Last" is the slowest inclusion of the nine & features an atmosphere that reminds me a lot of the down-tempo pieces from Slayer's "South of Heaven" & "Seasons In The Abyss" albums while the light-speed electricity of "Betrayer" is bursting at the seams with vitriol & spite.

"Extreme Aggression" isn't a perfect record but it was a noticeable step back up into the big league after the solid "Terrible Certainty" & is an undeniable classic that made a huge impact on my life from a very young age. It may not sound as extreme as it did back in the day but it's certainly lost none of its appeal. Interestingly though, after 30 years of listening to these two records I think that "Coma Of Souls" may have just pipped "Extreme Aggression" in my esteem for the very first time. I'm not sure how I feel about the fact that I now rate this record behind three other Kreator releases (i.e. "Pleasure To Kill", "Flag Of Hate" & Coma Of Souls") because I can't escape the feeling that it deserves more respect than that given the important role it played in my both my childhood & my musical development. Perhaps it's just a clear sign that Kreator were miles ahead of the rest of the Teutonic pack during their hey day.

For fans of Sodom, Slayer & Destruction.

Kreator’s fourth full-length starts off strong enough with the title track bashing and dashing its way across an opening four minutes plus of the kind of rabid thrash metal that I always associate with Kreator. This opening salvo sounds like the raw Kreator I fell in love with back with Pleasure to Kill and Endless Pain before it. The drums sound prominent yet not dominating and Mille’s vocals are full of that familiar demented edge. The guitars by way of contrast feel further back in the mix when the song is in full flow, yet their presence is still obvious and key to proceedings.

My previous review of this album had oddly seen me having troubles with the record when I wrote a piece for another site about all the Kreator full-lengths from the 80’s. I guess having done an end-to-end of all their albums in that decade in the space of a couple of days had left me a little tired towards the end and so I think I had written this album off certainly by way of comparison to the others. The fact is though that Extreme Aggression fucking rips. The standalone riffing of Love Us or Hate Us is testimony to just how full of attitude this record is; more than proving its worth at the second time of reviewing.

I understand that this album started to be recorded in a studio in Berlin, but producer Randy Burns had concerns over the set up of the studio and although they tried, mid-recording of Mille’s vocals one day, Burns pulled the plug, and the band took themselves over to the States a few months to re-record the album and do it better justice. One of the instruments that benefited here was the drums. Recorded in the same studio that saw Phil Collins deliver In The Air Tonight, Ventor’s skins sound fucking amazing on Extreme Aggression and as mentioned before this was not to the detriment of any other parts of the Kreator machine either.

With guitarist Jörg Tritze still not comfortable in the studio Mille was left to all guitar duties (as per the previous album) and the energy that flows from both the riffs and the sonic leads sounds like there were more than one of him the studio. His riffs being borderline as beastly as his vocals the two talents of Mille Petrozza combine well to deliver and exciting and memorable performance. The pace and vitriol of Betrayer is extraordinary as it toys and teases with the tempo like a video game character hitting power-ups at various points in the song and then settling back down momentarily before they hit another one.

Extreme Aggression is an incredibly tight thrash metal record that operates within boundaries set out from the very start. As such, its intensity does feel like it detracts from the overall quality of the album as it is a little too consistent for its own good and it kind of needs a brooding number dropped in around the halfway point to mix it up a little. However, for the die-hard Kreator fan there’s so much here to love that I am not sure many of them would care.