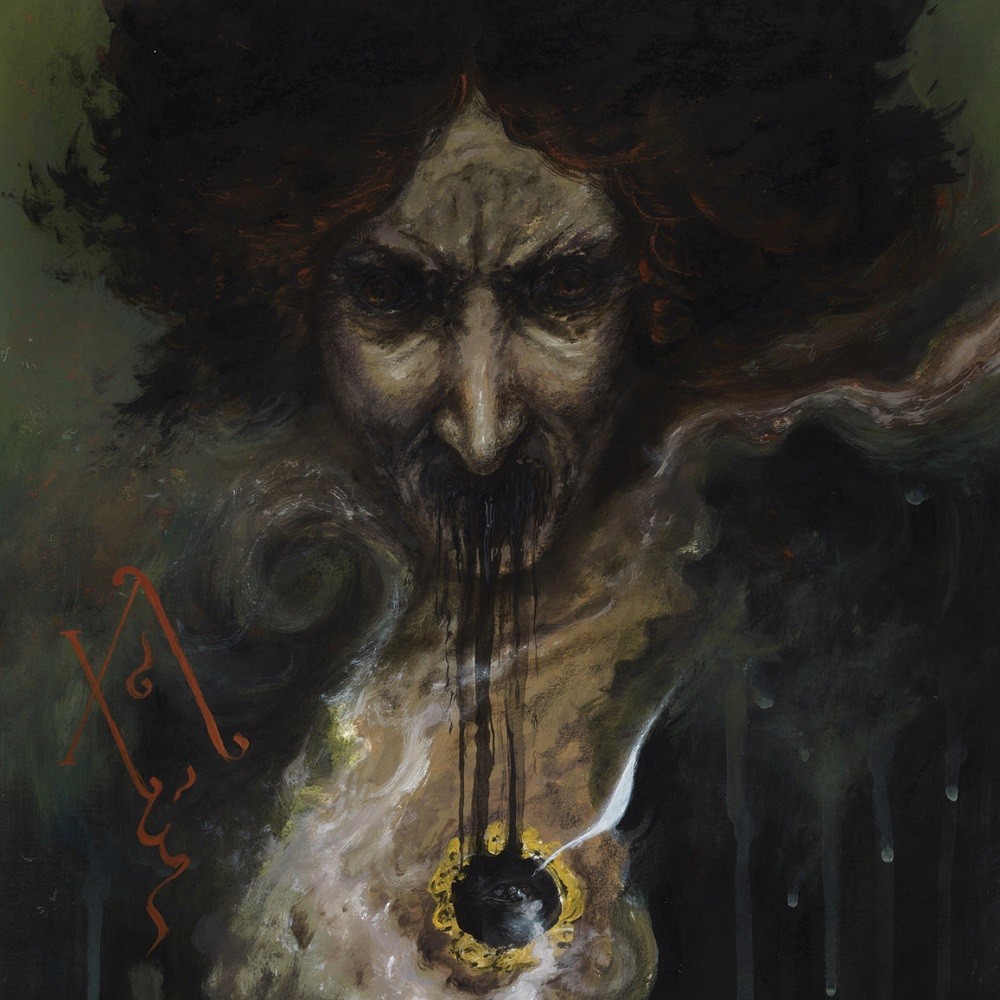 Oh…. My…. Fucking…. God… !!!!! It’s amazing how extreme music continues to surprise me after all these years. Just when you think that all of the good stuff has already been done, an underground release comes along & obliterates all of the walls that you’ve so carefully constructed to protect the eras you’ve placed on the highest pedestals. 2015’s “The Dreaming I” sophomore album from Colorado-based black metal duo Akhlys is one such release for me. I’ve always had an enormously strong passion for the darkest & most brutal end of extreme metal & my chosen brand of black metal is no exception. I like my drums blasting, my lyrics blasphemous & my vocals searing with an atmosphere that’s as cold & suffocating as a séance in an arctic snow storm. It seems that I’ve found a couple of kindred spirits here in Naas Alcameth & Ain too because this record couldn’t be more up my alley if they’d set out with the sole intention of satisfying my evil fantasies.

I have to admit that I had a little bit of a head-start on “The Dreaming I” as I gave it my first spin in late July after seeing Vinny name it as his all-time favourite black metal release. I got to know Vinny a bit on other metal-focused internet forums for a number of years before Metal Academy became a thing & over the extended period of time that we've been connected I’ve realised that we share some pretty similar tastes when it comes to black metal so my interest was immediately tweaked upon noticing that he held a release that I’d never heard in such high regard. The amazing cover artwork was also a major drawcard but I didn’t even manage to get halfway through the opening song before realising that I was experiencing something pretty special. In fact, the only reason that I haven’t mentioned it up until now is because my feelings were so strong that I had to get my head around just how much praise I could deem to be appropriate for a release that I was still so new to & the answer to that question has been… well…. all of it really!! Every bit of praise I can muster.

I’ve noticed “The Dreaming I” being labelled as atmospheric black metal which is interesting. Sure, there can be no doubting the all-encompassing power of the atmosphere of sheer darkness however this is much too brutal & the riffs are too upfront for that tag in my opinion. I’m much more comfortable with the conventional black metal one. Perhaps these links are encouraged by the dark ambient sections, the densely layered wall of guitars & the slow pace of the longest piece “Consummation” but they seem a little unnecessary to me. In saying that though, I can certainly see the irony in the fact that my brain wants to link Akhlys to other bands that receive the same sort of comparisons.

This 45 minute album contains just the five tracks & begins with a couple of absolute blast-fests. I’m a total sucker for insanely overthetop extreme metal drumming & you won’t find too many better examples of it than this one. I was actually wondering whether I was listening to a real drummer at times, such was the precision intensity on display & I’m still not entirely sure to tell you the truth. I suspect not though given the tone & timbre of the drum kit which has impressed the pants off me. Then we get a 17 minute epic piece that sports a slower tempo & gradually builds through a cacophony of intentionally warped melodic ideas & eventually culminating in one of the truest realizations of pure evil I’ve ever encountered. The dark ambient component is executed outstandingly well at various times throughout the tracklisting which is another key element of the album &, as someone that’s spent a lot of time with that particular niche subgenre, I was blown away by how well Akhlys understand the intricacies of ambient music. The use of twisted higher register melodic motifs is another important element of their sound & it’s unnerving to hear just how dark these can come across at times. The screaming vocals of Naas Alcameth are quite brilliant too as he works his evil magic & engulfs the listener in unholy contempt.

I’m completely unable & unprepared to find fault with “The Dreaming I” to tell you the truth. It’s as perfect a representation of the modern black metal sound as I’ve heard in many years &, after giving it the time to really sink in over the last couple of weeks, I’ve decided that it’s a top three black metal release of all time for me. In fact, it’s easily forced its way into my all-time top ten for metal in general & I don’t take a statement like that lightly at all after all these years of obsessive musical exploration. Akhlys have managed to truly capture every last inch of me with this record. I’m fully invested & it’s actually left me wondering if I should reverse my decision to leave The North given that I so clearly hold such a strong passion for black metal.

In over six years of listening to The Dreaming I, on a near 3 monthly rotational basis, I still have to say it is one of the most impenetrable releases to grace my vinyl shelves. That having been said, it is one of the few records I can truly connect with on a spiritual level and truly feel metaphysically cleansed after listening to it. Ahead of me furthering my progress in the Modern Era challenge for the North Clan, I cannot think of a better example of modern black metal than Naas Alcameth’s 2015 release. It delivers a unique take on atmospheric black metal using a terrifying transcendence whilst at the same time offering of level of harsh and conventional black metal that is pitiless and monstrous in equal amounts.

The debut release under the Akhlys name (Supplication) was dark ambient affair – which I haven’t listened to in all honesty – and these elements are deployed here to great effect here on the sophomore which ramped up the black metal significantly. As such, you must wait for things to get going on The Dreaming I as cavernous depths are forged by the atmospherics that kick off most tracks. This can be a distraction for some but for me personally it lets me connect with the record, allowing me to sink to the depths where the main events take place and feel its stifling and fetid air against my skin. I am not a deeply spiritual person by any means, but I can truly switch off from the world around me when I listen to this album. Time ceases to be relevant, distractions become nigh on impossible and the ability to touch and sense the horrific, cloying, oozing mass that the record seems to grow in the palms of my hands is strangely soothing.

I think I notice something new with every venture into The Dreaming I (which I guess is the point). The wall of noise that greets the listener on most tracks needs taking apart slowly, blood red brick by blood red brick in order to start to comprehend the true mastery at play across these five tracks. Melodies undulate and stab into proceedings from behind the slabs of tremolos, like shrill screams at times they soar and elevate everything around them to ghastly heights of unworldly etherealness, whilst never allowing the coarse and crude darkness to release its grip overall. The bass seeps in, sloth-like at times, maintaining a subtle yet still somehow malignant presence. My only criticism of the instrumentation is that in the cacophonous fury of the mix the drums are a tad lost in places – namely on the opening track, whilst on other occasions they are clearly audible and making a definite contribution.

This inconsistency in the drums stops this album from achieving full marks, yet still this remains one of my standout records from the last decade. I do not always get on with everything Naas Alcameth records (or allegedly says), but The Dreaming I remains a pinnacle of success in terms of his output. Melinoë, from 2020 actually out does its predecessor but that is already noted by me elsewhere on MA.

As I prepare to enter into my fourth decade on this planet, I'm continually asking myself whether or not I have gotten soft in recent years? As the years go by, thrash metal has become a dead genre to me; what used to be full of life and nonstop energy, now I view it as a black hole of empty chugging and solos, lacking in grooves and melodies and bands devoid of originality and would rather just copy the golden era of thrash of the 1980s. Even more so, my favour with those bands (i.e. Megadeth, Slayer, Metallica) has also faded as they have become tiresome and boring. And as I have grown into extreme metal genres like death/black metal, most of my favourite albums are of the melodic and atmospheric variety. For as epic as Saor and Panopticon albums sound, they won't be winning any "most brutal breakdown of all time" awards anytime soon.

With that being said, I recently gave The Dreaming I by American duo Akhlys a spin and... well I think it is safe to say that my suspicions might be true, but goddamn does Akhlys make the realm of Hades sound like a pretty awesome vacation spot! This is a marvelous record that takes the atmospheric and melodic side of black metal and combines it with some filthy grooves and riffs for one of the most impressive hybrids that I have heard in quite some time.

Whereas most of my black metal is of the open, soaring variety, Akhlys use the atmo-black sound to create a soundscape that resembles the floor opening up below your feet as you are dragged down into the abyss. The extended ambient intro of "Breath and Leviathan" sets the ominous mood right out of the gate, before what can only be compared to a B-list horror movie jumpscare, the serial killer pops up around the corner wielding their perfectly sharpened machete ready to murder you. The wall of sound black metal is sudden and shocking, and may increase your heart rate!

And if that doesn't scare you enough, the chase scene will. This black metal sound is relentless and is complimented by some fantastic sounding lead guitars and a dazzling vocal performance. The way in which this duo is able to effortlessly match their ambient interludes and atmo-black passages is both technically impressive and compositionally sound as they play off one another to create wonderful dichotomy's for cooldowns and making the wall of sound hit that much harder.

While this album is impressive, it does have a little bit of a length problem, in which some songs sound like they begin to lose momentum and would rather fade out to their conclusion, rather than with a full stop, perhaps signaling the end of the road. But perhaps the lack of an ending shows a group that would have you believe that their is no end to this path; it persists far beyond the end of a single song. However, "Consumation" has a definitive ending, but then proceeds to go on another two/three minute ambient outro and it feels out of place.

But forget the minor issues surrounding the length and how songs end! The intros and body are exquisite and the production is spectacular; the bass lines are very prominent adding to the depth. In the end, Akhlys' album The Dreaming I helps to restore my faith (however slightly) in the most extreme metal to still invoke a positive reaction out of me.