Reviews list for Savatage - Hall of the Mountain King (1987) 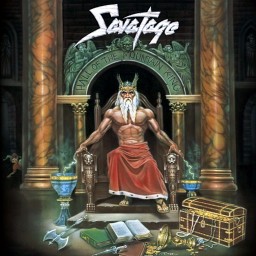 If I have a metaphorical draw in the music filing cabinet in my brain, there is most definitely a folder in their (probably in the bottom draw, or at the very back of the one of above it) marked “Overrated Metal Everyone Loves Bar Me”. Notwithstanding that some of the entries in that folder are down to my own stupidity and ignorance for not listening to albums fully or when in the right mood/not giving them proper attention etc.

Savatage occupy some space in that folder and are probably one of the more undeserving dwellers in there given that my problem is purely with the lyrically naivety of the album. The instrumentation is in the main fine, with Criss Oliva doing a sterling job throughout Hall of the Mountain King. Wacholz drums are all but lost in the mix for the most part I find and the thunk of Middleton’s bass is like an occasional throb you pick up on occasion in each track. As I allude to above though, my main beef is with Oliva senior’s vocals.

I get the intent. Sound menacing and theatrical as much as possible and play your riffs with the same sense of threat to emphasise the danger. Unfortunately, only the latter part of the equation works. Jon’s vocals are just grating and over the top to the point of distraction. At times the lyrical quality is terrible also. I quote from Beyond The Doors of Dark:

“Beyond the doors of the dark

Demon in your heart

Scream and thrash your head

Turn around, now you're dead”

Really, rhyming head with dead was the best they could come up with (I accept that Criss Oliva could well have been involved here as well, so I am not entirely blaming Jon)? For a band four records into their career by this point I just expect better. Albeit that Hall of the Mountain King was arguably the high point of their career it doesn’t bode well that we get Prelude to Madness on here that sees Criss emulate Grieg in a total show off instrumental after just four tracks, its only success being how well it sets up the title track that immediately follows it.

Even though I am bitterly disappointed by this record, Criss Oliva keeps the stars at three for this rating exercise as he is the outstanding talent in the band and truly shines across the album with fantastic lead work and sharp riffing (which does lose some edge to the keys often present alongside them). Constantly though he is let down by his brother. What the fuck is Jon doing just before the solo in the title track? He sounds like a mute child in an emotional frenzy and totally removes any serious edge to the track.

It is genuinely like Jon knew he was second rate in comparison to his brother and was just trying to make his presence felt unnecessarily and, in the process, brings nothing but cringey comedy to the album. The best moment on here for me is the track White Witch, being the one moment that the basic structure and disjointed vocal style compliment each other for one of the more positively memorable moments on the whole record.

I find myself wanting to enjoy this record a lot more than I actually do overall and it genuinely does showcase all that was good and bad about Savatage but the conflict is too much for me.  Needless to say they are staying in the bottom drawer of that filing cabinet.