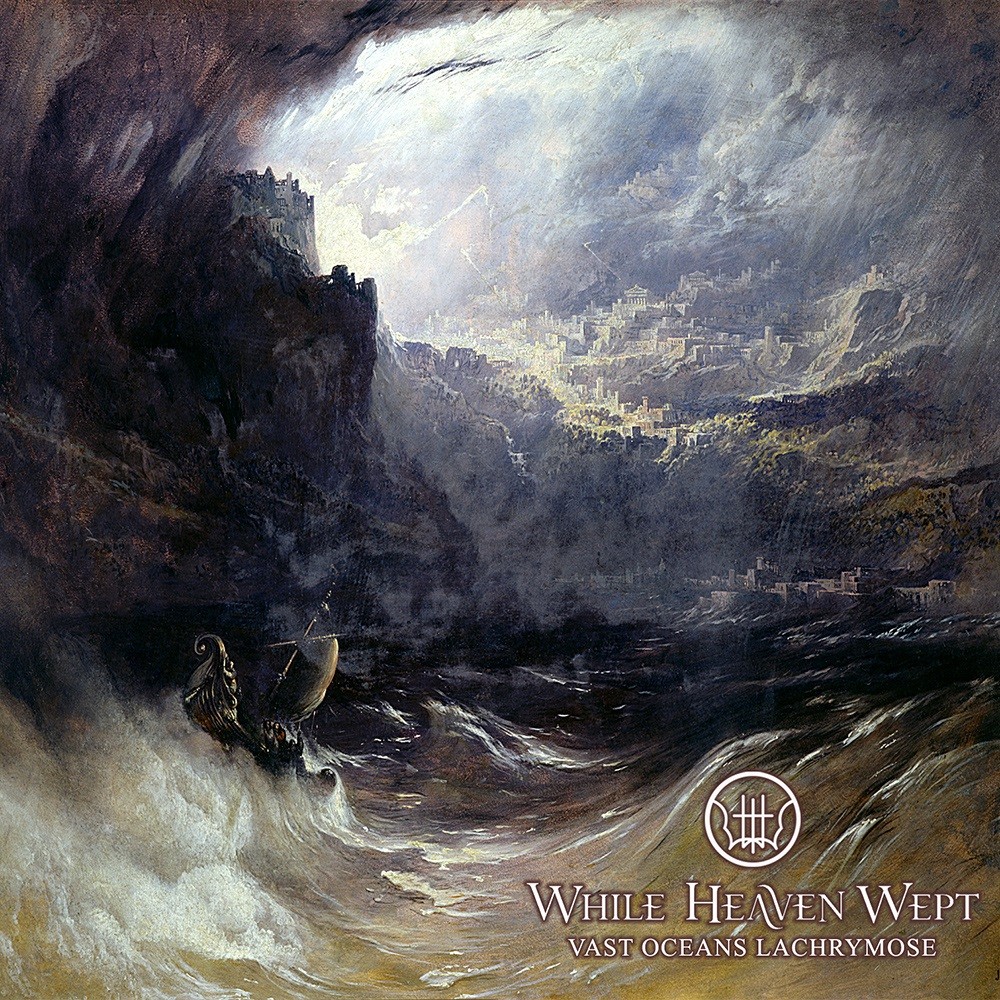 That is the painting that is depicted on the cover of Vast Oceans Lachrymose by While Heaven Wept. Why exactly did I make it the title of this review, you might ask? Because, there's nothing more fitting to what this album conveys to me than the title of the artwork, and the artwork itself. This album doesn't have any religious undertones, but there is a recurring theme of faith in... something, stilling the mighty storm that threatens our very life.

Now, if you know anything about While Heaven Wept, they're not exactly what you would call a positive band in terms of musical themes. They were an epic/traditional doom metal band to start out, and, while this album would be the start of them branching out from that style, they still always carry the doom metal ethos regardless of what style they're playing. This is especially an important thing to know in regards to this album, and it will be clear why later on in my review. This album's theme works in two parts, the first portion of this album is a storm of sorrowful, anger-fueled traditional heavy metal with flavors of doom, power, and progressive tossed about within it. "The Furthest Shore" is our first track, and it is a near-16-minute story about someone made to travel across the sea, hoping to see a better life on the other side, only for the storm to tear him and his ship asunder, leaving him for dead upon the very shores he hoped to find. It's an intense roller-coaster of a track that has a grandiose finish as our protagonist's soul is taken to the great beyond.

"To Wander the Void" was the first song I ever heard from this band. It was in a power metal compilation on Youtube (which looking back was a debatable choice on part of the compilation maker) and I remember it sticking out to me because it sounded *nothing* like the rest of the flowery euro-power metal that was alongside it (not saying I don't like my share of flowery euro-power metal). I later learned that it was a song written as more-or-less a Fates Warning tribute, but it fits perfectly on this album. Conceptually, it carries on the theme of someone going on a hopeless journey only to perish. Its simplicity works to it's advantage; the plodding opening riff is one of the heaviest things I've ever heard, the "ah" chorus is impossible not to sing along with, and Rain Irving's vocal delivery throughout comes across as passionate and authentic.

"Living Sepulchre" is our next track. It's an angsty, raucous track with a chorus that makes you feel like you're falling into a bottomless pit. So, overall, we have a very solid heavy/doom metal album with some pretty and epic moments throughout. You might be asking "What makes this so important?", and honestly if it wasn't for this next track I would probably be giving this around an 8/10, but "Vessel" propels this album not only to a 10/10, but to one of the most important albums I've ever listened to in my entire life

I said that this album has two halves to its theme, and "Vessel" is where the second part of this album's theme begins. As I said before, WHW has always been doomy. They've always written songs that convey a sort of Greek tragedy level of misery, a feeling of being a mortal human standing up to a god, only to be easily stricken down and your charred body being tossed back to Earth in an eternal free-fall. The first half of this album conveys that, same as their discography before, and their discography after this album (while their last album is a bit brighter in terms of aesthetic, the lyrics still carry on the miserable doom metal ethos). "Vessel" is the smallest of all hopes on the horizon of While Heaven Wept's hopeless universe. It tells a story of someone who knows that they could end up experiencing the same fate as the one in "The Furthest Shore", but compels the listener to believe in them that they may see a better future across the ocean. It *is* the faith that stills the tempest. The concept of having one singular track in an entire discography that conveys a genuine heartfelt message of hope is one of the most powerful things I've ever heard. There is no song that has touched me in the way "Vessel" has. When I hear this song, I really think of the album cover, and how it shows a violent storm being pushed aside, and on the horizon there is a beautiful city waiting to provide safe harbor. It's a song I haven't gotten tired of in over a decade now; from its contemplative intro to its anthemic chorus, it hits the same way for me on the 1000th listen that it did on the first.

"Vast Oceans Lachrymose" is the last actual track on the album. It starts with a dramatic synth build up, then breaks out into a "positive yet doomy" instrumental that repeats constantly, adding new parts as it goes on. First it's just synths, rhythm guitar, drums, and bass, but then it adds a soaring lead guitar melody that the rhythm guitar provides countermelody for throughout, and then it adds some subtle keyboard inflections and simply lets the listener absorb the wall of sound being presented to them. It's a perfect track to just close your eyes and think about everything you've heard so far. The "Epilogue" is a short synth track that eventually fades out as the ocean sends us off for good.

I've come to accept that this album won't mean as much to others as it does to me. I'm not sure if it ever could, in the same way that some people connect with a band like Nirvana in a profound way while I'm stuck simply seeing them as "pretty good music". I know that speaking of my experience and interpretation of this album would likely never change the minds of anyone who has already listened to this album and decided that it's simply a solid heavy metal album, but I definitely don't think it hurts to try. There have been many times in my life where only this album could still the tempest that was ravaging my psyche, and to this day it still continues to be the only album to simultaneously validate my feelings of hopelessness *and* give me a reason to have hope anyway,