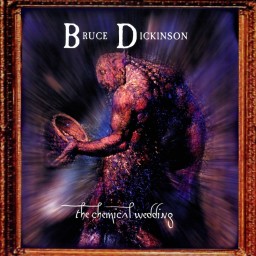 For a person who prefers Di’anno-era Maiden to Dickinson-era Maiden, Bruce stepping out on his own was not a venture of any particular interest to me. His exit from the band in 1993 did not shake my world in all honesty. I recognised that their best years were already behind them at that point and the momentum built up throughout his twelve years in one of the world’s biggest heavy metal bands was most definitely on the wane.

Having witnessed even the furore around Tattooed Millionaire, I still was not curious enough to listen to it feeling that the snippets of the title track and that fucking irritating Bowie/Mott the Hoople cover I had picked up had done little to float my boat. The Chemical Wedding has been an album talked about in high praise for years of me frequenting internet forums or reading reviews in magazines or online. I think the reason why I still left the album overlooked was simply down to being much more interested in extreme metal for the latter part of my listening life and so it is an album that has always remained on my “to-do list”.

Researching the release for this clan challenge certainly educated me on a few things I had no idea about. I had no knowledge of Adrian Smith’s involvement for instance or that the album is semi-conceptual with a focus on some of William Blake’s works. Additionally, a film of the same title as the album was released with a screenplay by Bruce himself which again, I was blissfully ignorant of the existence of.

Listening through to the record this past week or so there is a familiarity to some tracks which suggests I have given the release a spin in the past on more than one occasion. For an album so clearly linked to two of the key personnel in Iron Maiden’s success, there is a lot more going on here on The Chemical Wedding that instantly shows the reason for its success. It is not that Dickinson is forcing anything on his fifth solo release, not trying to be nu-metal or more extreme (or grungey like on Skunkworks so I read) or even any darker. Instead, he delivers an album that is rich in historical reference but equally wealthy in terms of the consistent and robust heavy metal material that lands track after track.

The record reminds me a lot of Manilla Road (only less quirky in terms of vocal delivery – yet still comparable in places, Jerusalem for example), with a gritty and nostalgic edge to the guitars and a solidity to the percussion that fills the room as you play the record. Having assembled a throng of talented musicians such as Smith and Roy Z this success is not unexpected in all honesty, however at no point does the album disappear up its own arse and get wanky or outlandish. Arguably the most modern sounding track on the record is Trumpets of Jericho which has a kind of nu-metal vibe to it but still retains a sophistication that belies the snappy riffing and predictable rhythm section. This isn’t a mid-life crisis sounding record like Rob Halford decided to do with his self-titled project some two years after this. Instead, this is Bruce standing on largely familiar ground, farming this earth for a fine harvest.

There’s a couple of surprises on here too. I hear record scratching on Machine Men as it fades out and King in Crimson has a heavy, almost doom-like riff to kick the album off with. Album closer The Alchemist has a progressive element to it that is unexpected and well delivered, and herein lies the strength of The Chemical Wedding. This album is well performed, with a level of professionalism and subtle excursions into various territories that makes all those things even possible. Set against what could have been a dull and pretentious attempt to capture the dark majesty of William Blake, The Chemical Wedding emerges triumphant. Even the bonus track version doesn’t extend the experience in any negative light, serving instead to only further cement the heavy metal credentials of a record I am kicking myself for overlooking for so long.