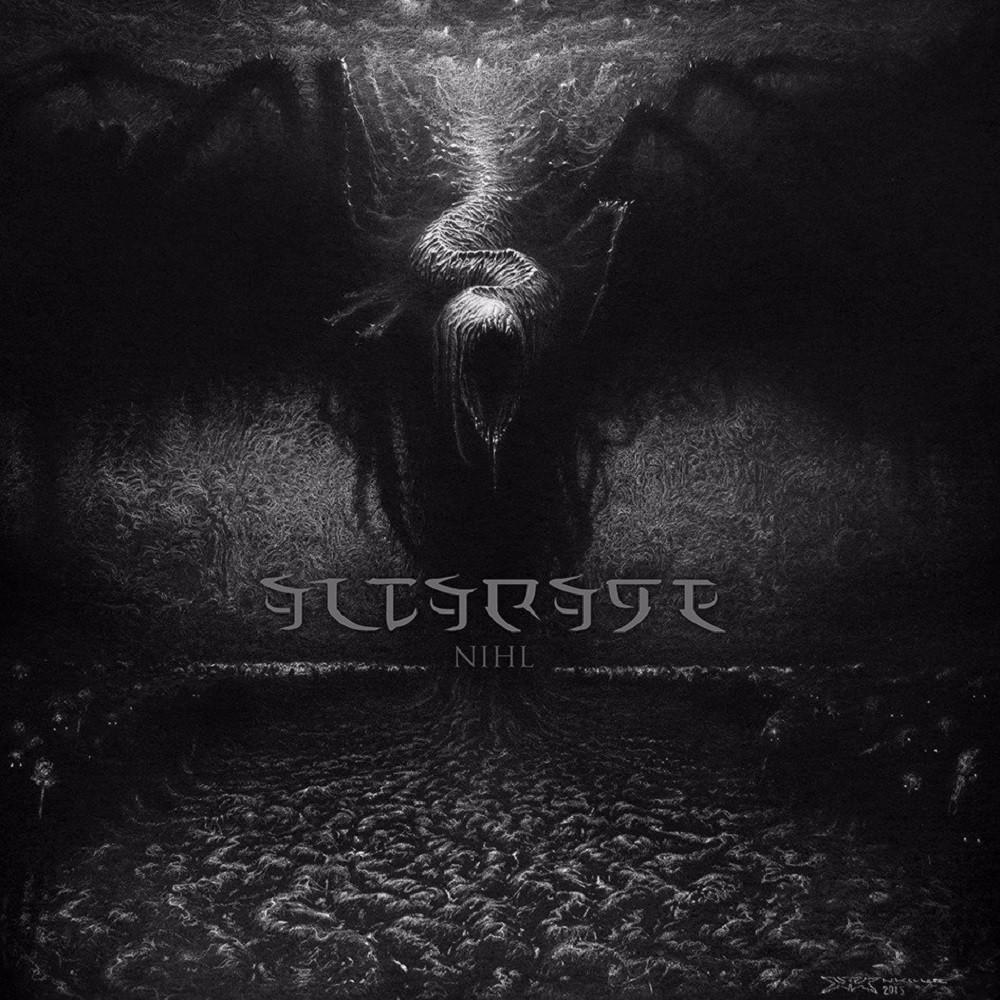 Rare indeed is it for a release to leave me speechless and reduced to little more than gaping jaws as my only sign of human interaction or response. The fact is that when I first heard "Nihl" my ears were first feasted upon by the two tracks alone that first premiered.  I had no idea why Altarage had not appeared on my radar until then but thank fuck in the name of all that is unholy that they did.

Stunned though I was by the cavernous, murky depths of the two teaser tracks that plagued my head for days afterwards, I was still completely unprepared for how utterly monstrous the full product actually was. This ladies and gentlemen required me to forget all that I knew, indeed dismiss every common notion of the genre that I held because Altarage came with no rule book. Here be music of no particular form, just a writhing mass of pain, disease and overwhelming death.

I can't remember the last time I was floored by an opening track. The start to "Drevicit" is like a city full of monolithic, gothic architecture collapsing on you. It smothers you whilst simultaneously raining down blows upon your meek and pathetic existence. It doesn't just wind you, it tears the air from your lungs and presses its whole weight against your very soul.

And this is only track one. Of eight!

Second track "Womborous" was one of the two teasers I mentioned earlier. It has a thunderous structure like the march of an undead army. The riffs pummel you into submission like blows from an ancient, rusted Battle Axe. They leave jagged bits of flaked metal in your wounds that infect your blood with their coppery coloured menace.

There's no let up to this insanity, it is a constant darkness in your psyche, a raging tide of demonic abhorrence and ghastly intent. There are no corners to hide in, no crevices in which to take shelter. It is an all encompassing vortex that takes all in its path. The seeping horror of the intro to track 3 "Graehence" will have you clawing at your own eyes and ears in fear before the macabre tribal drumming renders you paralysed until the guitar just crawls over you. "Graehence" really does tease you with its varied pace and structure, never once letting you get your head around truly what is going on. Inevitably there are comparisons to be drawn with Portal here but this is something else. Even though you are listening to chaos it does have a discernable presence, a hellish rationale to its being and existence. As "Baptism Nihl" begins it sounds like an effort to re-acquaint you with this evil wizardry as though you needed more of your soul stripping away as you reach halfway on the album.

"Vortex Pyramid" is perhaps the best named track on here. It is a trap, a rising swirl of madness forcing you into a confined point of dementia. As I got to this point I noticed how "un-death metal" the vocals actually are. They are more like a ghoulish BM style which compliments the music perfectly. When the instrumentation creates something this disturbing you don't need guttural growls and gurns to accompany it. "Batherex" is the second of the teaser tracks, with its opening riff that sounds like a swarm of insects scittering down your bedroom window before it opens up into yet another full frontal assault. Seriously? The fucking guitar tone on this album alone should make you feel filthy and unwashed.

And so it continues as the ferocious ending of "Altars" gives way to the dreadfilled, looming build of closing track "Cultus". By this point the world has been black for over forty minutes and the sun may never rise again, your house has somehow decayed around you and that fluffy lovable pet dog you had has now been transformed into a full blown, bonfide HellHound. There's so much going on within the eight tracks on "Nihl" that you may never fully come to terms with the experience. The sudden end to the final track is reminiscent of a portal to the underworld suddenly closing, and even though your personal torment is over still somewhere the agony goes on, endlessly.