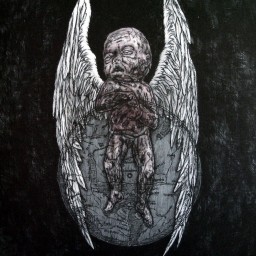 Whether it is the harsh, discordant and unpredictable nature of the band's sound or becoming embroiled in the media frenzy surrounding the alleged extreme political views of alleged members of a band, there's usually something lurking not too far away from the name Deathspell Omega to make the average listener's toes curl.  The fact is that when it comes down to the bare bones of what they do (record music) they are exceptionally good at it.

I find their third full length to be a bit of a middling affair however.  It does what it says on the tin most definitely but somehow the whole experience gets a bit lost on me.  There's some really well thought out and solidly constructed structures in the thirteen tracks on offer here - First Prayer and Second Prayer in particular - that manage to build jeopardy and unease superbly.  Alongside these however are a series of very similar, "smash 'n grab" tracks that only really stand out due to their notional punk influence.  As entertaining as they are they do interrupt the overall flow of the record too much.

The album comes across as being undecided on what it wants to be.  For me it works better in its less frantic and more mid-paced moments, weaving strong fibres and memorable patterns, allowing the talent of the songwriting to shine through.  Whilst certainly not opposed to the more frenetic pace of the BM spectrum, for me it brings little in the way of benefit here and the "extras" such as the chanting and choral smatterings really enhance the offering far better.

With a bit of a trim and maybe less of a storm of ideas the album would almost certainly be attracting near to maximum stars but as it is I struggle to score it much above halfway in comparison.

Deathspell Omega is another name stay in the BM scene that I have heard over the years but nothing stuck out. This album is a horrible offender too me, very bland. When I think of Black Metal I think of a cold, dark void of an atmosphere that should suck me in and drown me with despair or other feeling of emptiness. This drowns me in boredom and apathy. I have recently heard of this bands controversies and have been trying to read up on reviews of the band and this album to possibly get another point of view of this album. I even read up on the satanic lyrics and prayers even come off campy and cheesy for me. Nothing in this album feels demonic, it feels too try hard.

This is not a horrible album either, nothing is so blatantly bad I need to turn off as I am listening to this again as I type but I can't find anything to pull out of this. This is background black metal if there was one, but not for atmosphere or driving music or anything. I listened to this once while waiting on an oil change and almost forgot I was even listening to anything. Like a musical score for a video game or movie where things are happening on screen that could use a soundtrack but nothing too compelling to forget what you're doing. This could be good sleeping music or reading music for me. It's doing really well as music to write to, but as Blessed Are The Dead Whiche Dye In The Lorde plays I am more interested in the spelling of 'dye' in the title. Why that choice? I also just noticed how 'whiche' is spelled. Apparently that's an obsolete version of which. Going for an 'old' feel for satanism? I don't think Satan is stuck in the last millennium, we have enough hell on earth now to pick up on.

To say something on the actual music itself, the vocals are fine. They sit in the background like everything else. It all feels toned down like they're trying to make it spooky but it comes off to me as too passive and uninteresting. The instrumentation does not feel too wild for I've heard others refer to this as avant-garde, which I can believe that may be something DsO is going for.

There is an entire scholastic case study to find here within this album and I should make this a 5* for that but I can't. I don't have that much interest in it. I'm going to move on to something I can actually get lost in sonically instead of whatever they're actually trying to do with this. At this point I am listening to the title track and..... got nothing and walked away. Back on Jubilate Deo is where I feel they could've had something. This feels so unconventional and even more out of place. If they made an album around this at least it would be more memorable to me. I just can't finish this again, i'm going to go do something else now. Eh