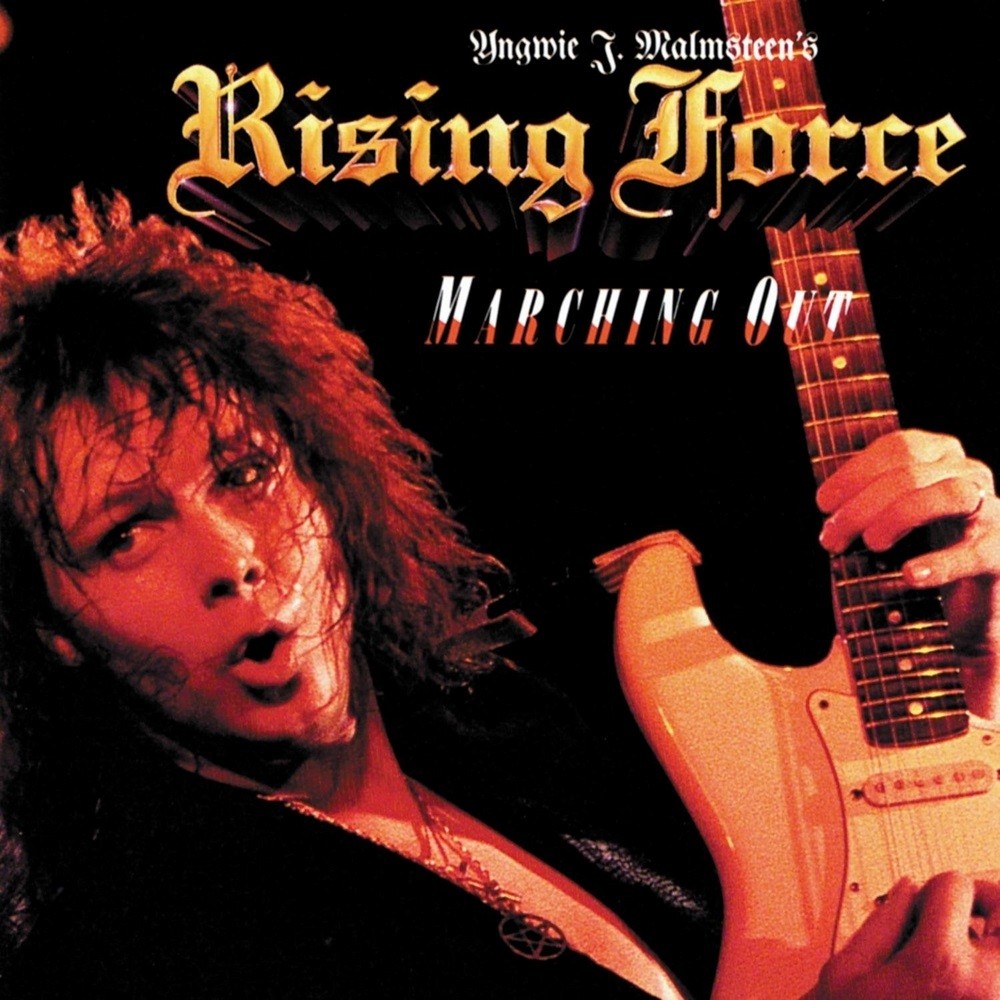 Yngwie’s sophomore solo album is much more traditionally structured like a regular album, with almost every song featuring vocals (strong vocals at that) and the improvised noodling is kept to a minimum. Depending on your taste, that can be a plus or a minus, but for me it’s a huge plus. Yngwie works best as support – he writes fantastic riffs, and his solos are excellent in small doses, rather than dedicating entire songs to him improvising. Although far from pop songs, the vocals feature some fantastically catchy choruses, and though the songs delve into anthemic arena rock territory, Yngwie keeps it interesting by ensuring the backing riffs are as technical and engaging as ever.

Definitely an improvement over the debut in my opinion, which was impressive but occasionally boring.

1984’s highly successful & heavily influential “Rising Force” album had been somewhat of a solo project for Yngwie. Not only did he handle all of the guitar duties on the record but he doubled up with the bass work as well. Singer Jeff Scott Soto only contributed to two of the 8 tracks on the tracklisting with the rest being instrumental platforms for Yngwie to showcase his astounding technique & talent. Well 1985’s  follow-up record “Marching Out” was released 18 months later in September 1985 & it sees Rising Force developing more of a band dynamic with drummer Barriemore Barlow being replaced with Anders Johansson (the brother of Yngwie’s keyboardist Jens Johansson) & Yngwie handing off the bass duties to new recruit Marcel Jacob. This results in a more focused release with a stronger reliance on quality song-writing & a bit less of the genre-hopping we heard on the debut.

As with the recording of the debut, we see future Primus bassist Les Claypool sitting behind the mixing desk but I can’t say that he’s done a terribly amazing job to be honest. The drums are far too loud in the mix & the rhythm guitars sound quite muffled for a supposed guitar shred release. But I won’t dwell on that too much because I can look past it & there are a number of subtle differentiators from the debut in terms of in style & technique that are worth discussing.

Firstly, the most obvious difference is that this is a predominantly song-based record with eight of the ten tracks containing vocals on this occasion. The two instrumentals are also the shortest tracks on the tracklisting too so this isn’t just an avenue for Yngwie to show off his ridiculous technical ability any more. It’s an actual band & not just a support act. I do miss the jazz/fusion influenced moments that Yngwie indulged in on “Rising Force” as there’s none of that on offer here, but on the positive side, there’s also not as much of the cheesy neoclassical work in the composition. Sure Yngwie inevitably utilizes classical themes in his solos, but there’s not too much of it in the rest of the song-writing which suits me better if I’m honest. Even today I struggle to comprehend the sheer talent that Yngwie showcases in his solos though. He’s got a wonderful technique & a well-defined & easily recognizable tone however it’s easy to see why he’d go on to be labelled as somewhat of a one-trick pony in years to come because he’s already starting to repeat himself here with several of his trademark licks being repeated across multiple tracks.

But for me, the biggest plus for the “Marching Out” record was front man Jeff Scott Soto’s performance behind the microphone because he delivers a vastly improved effort here over the debut where the vocal songs couldn’t overcome the substantial cheese factor. This time we hear him going for broke with his higher register screams soaring into the stratosphere. I like the use of harmonies too & there are several tracks that have become definite guilty pleasures for me over the course of my 30 year relationship with the album. Even the divisive “I Am A Viking” is one of my favourite tracks on the album. And you heard it here first…. Yngwie invented viking metal. He’s taken the Manowar blueprint & made it more melodic & less theatrical! It’s so cheesy but those familiar with it can inevitably sing along to every word which is a very good sign.

Whereas I suggested that the “Rising Force” record was the true origin of the neoclassical metal subgenre, I actually don’t think I can class “Marching Out” in the same way. I don’t think the neoclassical element is a strong enough factor in the majority of these songs to be resorting to that tag. The more traditional heavy metal one seems more appropriate this time with a stronger metal component & the neoclassical elements being used more as tools rather than the platform through which the song-writing is built on. There’s also a fair bit of power metal about this album & it’s not hard to imagine that it might have been an influence on the early European exponents of that particular subgenre.

It’s interesting that I always regarded the “Rising Force” record as Yngwie’s career highlight when I was younger but now I feel that perhaps I was blinded by the quality of his next-level musicianship which was more obviously showcased through the instrumental format because “Marching Out” seems to take a clear step up in terms of song-writing & maturity. There’s no doubt that there are still a few weaker numbers included but the greater quantity of highlights sees “Marching Out” easily managing to cater for them. It’s a really solid outing actually & it may be my favourite Yngwie record overall these days. It was certainly the strongest example of the traditional Swedish heavy metal sound we'd heard to the time.