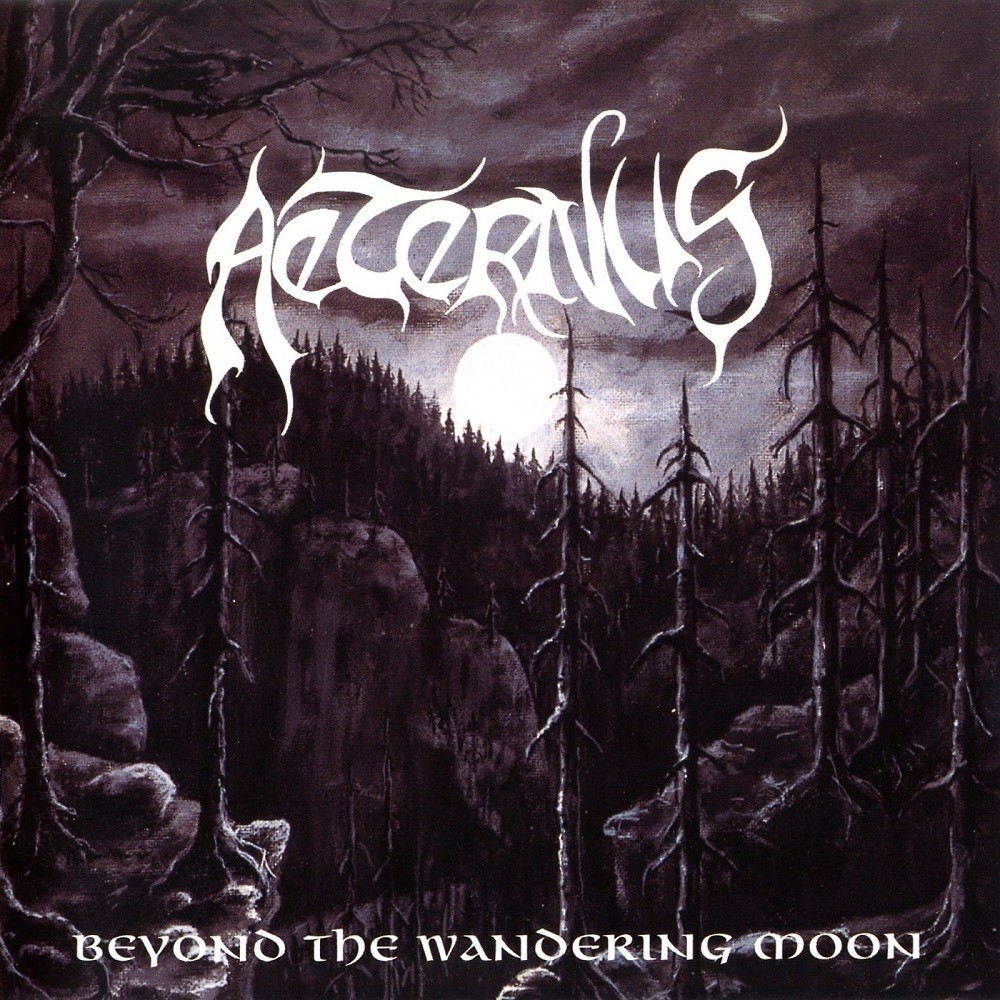 A fantastic, not to mention epic, black metal album that deserves more attention.

Many bands start off their career by playing it safe and attempting to replicate already successful templates before finding their own identity on their second or third album. That’s certainly not the case with Aeternus (which means Eternal in Latin for anyone interested). These Norwegian’s spent the first few years of their union creating an original and very atmospheric form of black metal before promptly shedding everything that made them unique and entering the realm of typical, uninspired death metal. Originally a three piece, Aeternus at this stage were made up of Ares (vocals and guitar), Vrolok (drums) and Morrigan (bass and keyboards). Their debut full length album Beyond the Wandering Moon has quite a few things that make it stand out from the pack. Firstly, there really aren’t that many female performers in black metal, so the inclusion of Morrigan (aka Nicola Trier who also played keyboards for Obtained Enslavement around the same period) is if nothing else a novelty. Secondly, and most importantly, Aeternus don’t really sound like other black metal bands.

There are aspects of Beyond the Wandering Moon that are more in line with death metal. Ares’ vocals are low and guttural instead of the usual shrieking or raspy black metal methods. I really like them, and I don’t think they contrast at all with the black metal riffs. It probably helps that the growls are quite low in the mix, meaning they emerge out from within the music rather than dominate over the top of it. The drumming is also fairly death metal in sound with the blast beats having a crunchy and powerful presence. If I had to pick a death metal band that comes to mind it would be Amon Amarth, but that probably has more to do with the mood than anything else. Despite everything I just said, Beyond the Wandering Moon is undoubtedly a black metal album. They utilise repetitious, atmospheric riffs combined with a slight folk element (think Primordial) that make you feel a part of some ancient culture, while the injection of intense faster sections means things never get tiresome. It’s an extremely effective combination and one I wish the band had continued with throughout their career.

If Beyond the Wandering Moon has a flaw, it would have to be the length. It’s not just the fact that the album has a running time of 65 minutes that causes problems. It’s that all 8 black metal tracks (which are neatly bookended by surprisingly beautiful piano and harp instrumentals) have running times of 6 minutes or longer. Some of them are truly worthy of the time allotted to them, but others such as Embraced and Sentinels of Darkness drag on a bit after promising starts. They’re certainly still thoroughly enjoyable, but they probably overstay their welcome. I can’t find much else to complain about here as Beyond the Wandering Moon is a wonderful album. Sworn Revenge, White Realm, Waiting for the Storms and the huge Winter Tale are all breathtaking examples of powerfully moving black metal and, in my opinion, this album simply doesn’t get the attention it deserves. Thankfully Aeternus’ next release (…And So the Night Became) would be of a similar style and quality, giving us fans two very big reasons to be thankful, regardless of the direction the band would take down the track.