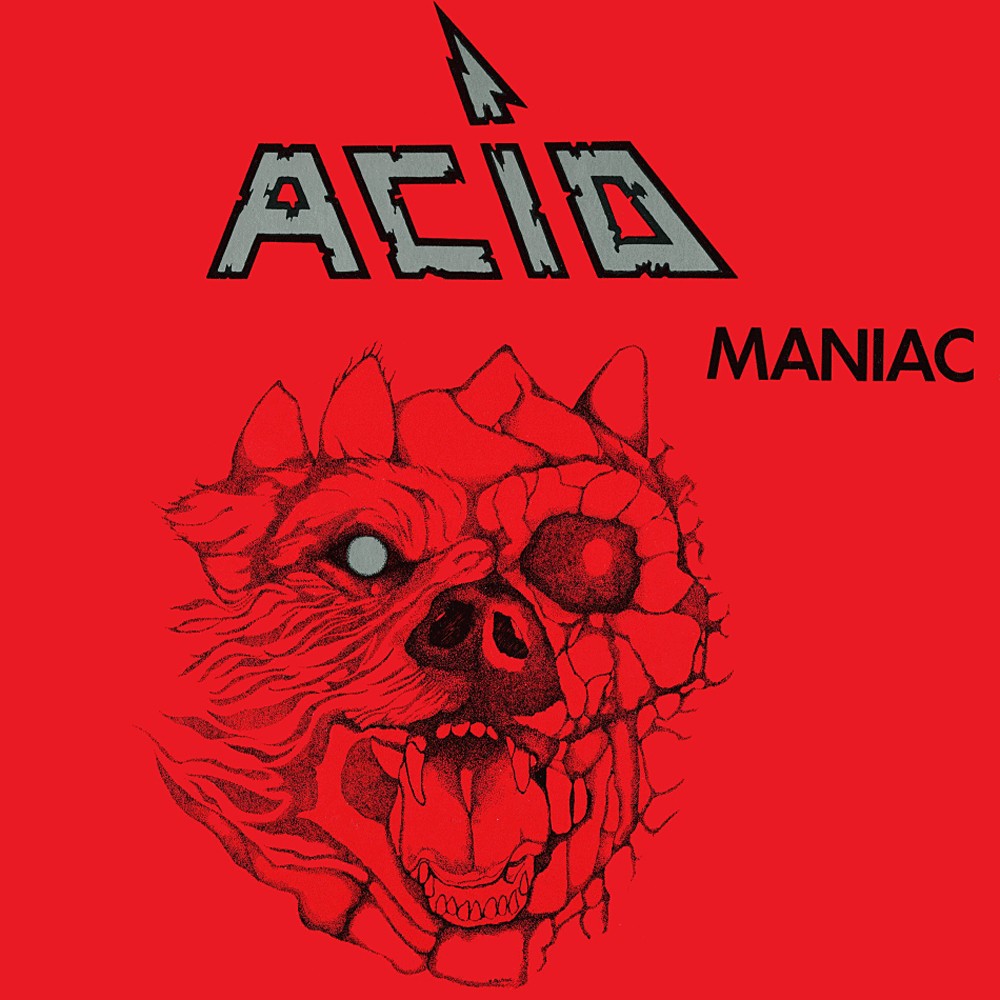 Belgium's Acid were/are a fun bunch by the sounds of it.  Their current status might be a bit of a grey area with a rumoured two versions of the band being in existence but on their sophomore album there is no ambiguity on any front.  What we get here is straight up heavy/speed metal absolutely brimming with energy and youthful vigour.  Whilst they might not have been the most flamboyant musicians they certainly know how to put on a performance and this is in no small part is due to vocalist Kate de Lombaert.

Now, Kate isn't any soprano type vocalist and indeed shows no hint of melody or harmony during the record.  Instead she uses her curt and blunt pronunciation to great effect, combining it with her gruff and aggressive delivery that makes for a perfect accompaniment to the hi-octane pace of the music, elevating the overall edginess of Acid's sound.  Although it does rely heavily on this urgent and busy riffing style, Maniac has branches of variety that show build to tracks such as America making them immediate and memorable without sacrificing the cutthroat approach to the music overall.

It does still lack variety overall though, and the elements of filler mentioned in other reviews (namely No Time) results with the odd sigh getting uttered during the listen through.  There's certainly no dynamic playing going on across the instrumentation here, in fact I would go as far as to say that without Kate this album wouldn't work quite so well.  I can't remember any leads if I am honest and the drum work seems to happily sit as a background element only.

Still, for a sophomore release (done in the same year as their debut) it is a good effort, solid and consistent if not predictable as a result.

An infectiously fun album cover to cover. It was a pleasant surprise hearing a female vocalist on an album like this who has the pipes to really drive the act home. When I first put this on I could have sworn I was listening to an alternate universe version of Rush, which is still a compliment in my book. Maniac slows down a little too much after the two blistering openers "Max Overload" and "Maniac", with "Black Car" and "America" being noticeably less energetic. "Bottoms Up" also overstays its welcome just a bit, but any of these songs are far from being bad. All of the ingredients of great Speed Metal are here, from the tight and accurate 16th note shredding to the intense and heavy chugging of "Prince Of Hell And Fire", which turned out to be my favorite track in the end.

Although they're overlooked, Acid delivers a fantastic Speed Metal performance for its time with a unique and talented female vocalist at the front of well written Speed Metal riffs.

1983's self-titled album saw Belgian five-piece Acid kickstarting their career in fine fashion with one of the earliest legitimate speed metal releases of any note (see Exciter's "Heavy Metal Maniac" for the other). Well Acid wasn’t satisfied with resting on their laurels & not only did they manage to record & release their sophomore record later in the same calendar year but they also managed to top it with an album that’s faster, more aggressive & more professionally put together on all levels.

“Maniac” sees Acid’s sound showing signs of development over the rawer debut which was roughly a 50/50 proposition with regards to speed metal & Acid’s earlier traditional heavy metal sound. “Maniac” on the other hand is more like three quarters speed metal with drummer Anvill continuing to pound away on his double kick in worship of Motorhead’s Philthy Phil Taylor throughout most of this material in exciting fashion. Female vocalist Kate sounds a little more aggressive here too as she spits out her lyrics in a slightly more spiteful fashion while the production is cleaner, thicker & more powerful than the one we heard on the debut. The metal audience had been hearing some pretty raw examples of speed metal production to that time& I guess that stems from the Motorhead & Venom influence but this cleaner sound is pretty much spot on for speed metal in my opinion. I prefer to be able to hear all the nuances & let the song-writing do the talking rather than having to rely on raw intensity all the time. The guitar solos are probably the weak point of the album as they lack authority & don’t really serve much purpose but they’re relatively short & fly by without you noticing too much.

Interestingly, my favourite track from the debut was one of the more traditional heavy songs in the anthemic ode to being a metalhead “Hooked On Metal” & once again my two favourite numbers are probably the couple with a more classic metal sound. In fact, the slowest track on the album, “Prince Of Hell & Fire”, is absolutely brilliant & is the clear album highlight in my opinion. It’s got a dark Judas Priest meets Black Sabbath feel to it with plenty of space & a ploddy brooding tempo ala Sabbath’s “Heaven & Hell”. Amazing stuff! There is the one blemish on the tracklisting however in the punky speed metal track “No Time” which sounds half-baked to me but the other seven songs are all worth listening to.

Fans of Exciter or the faster Motorhead, Venom, Raven & Judas Priest material will definitely get into this album. It’s high quality stuff indeed. In fact, I'd suggest that it was the strongest speed metal record the world had seen to the time.