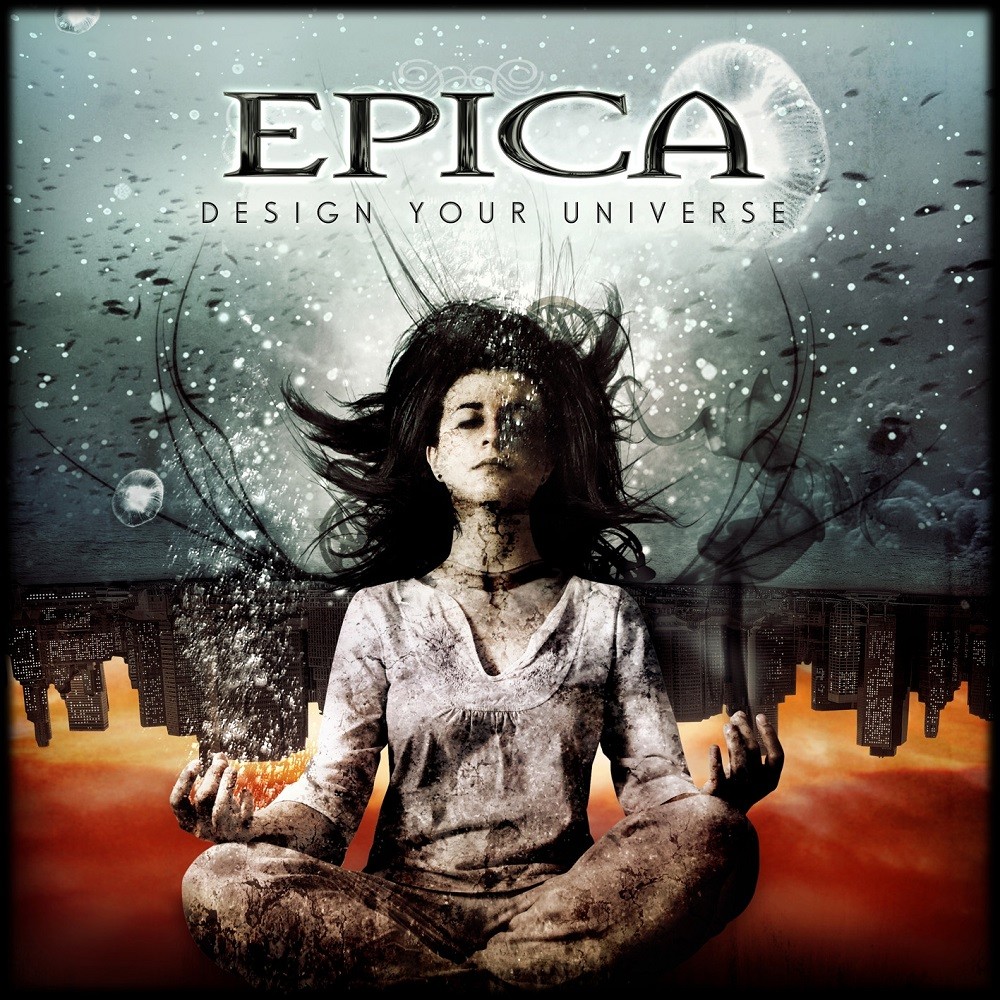 I already went through a couple After Forever album reviews, but I know I have to review an album from Mark Jansen's later more epic band, Epica! He has designed a new universe made out of some of the most epic metal to be heard...

With a new lineup, Epica was destined to another well-structured album with more positive lyrical themes. While The Divine Conspiracy had lyrics of religious wars, Design Your Universe tells a prominent message of being free to make your world stronger by design. Other themes that would influence later projects include Mayan cultures (Jansen's side project Mayan), experiences with death (Requiem for the Indifferent) and quantum physics (The Quantum Enigma), all of which shape our universe together.

Like the Big Bang, it all begins with "Samadhi", a prelude to set up the music and lyrics. The first actual song "Resign to Surrender" explains the overall style much clearer; vocals mixing between unisex choirs, male growls, and female soprano, and the band's trademark instrumentation of mixing guitar-oriented extreme death metal influences with the symphonic metal that's an essential part of the Epica sound. That song also continues the "A New Age Dawns" saga as "Part IV" (the first 3 parts can be found in Consign to Oblivion). The very gorgeous "Unleashed" was a great choice for the album's first single. The solo in the heavy "Martyr of the Free Word" can practically be used in a Cannibal Corpse album, which was an early encounter of death metal influences for me. Those influences are more evident in the furious drumming and middle-eastern-esque melodies. "Our Destiny" has great riffs and operatic vocals, especially at the end where vocalist Simone Simons does a spine-tingling vocal exchange with the choirs. Great epic songs so far, but there's more epicness to come in the next song...

"Kingdom of Heaven (A New Age Dawns, Part V)" is the album's real centerpiece highlight, a 5-part 13-minute extreme symphonic metal epic with the addition of opera choirs and an acoustic section. This is probably more progressive and epic than Opeth! If there's one minor hiccup in this album, which fortunately doesn't detract this perfect experience, it's the pointless interlude "The Price of Freedom". It doesn't contribute much to the strength of the album, and the talking comes from Obama and Bush in the presidential debate of 2008. "Burn to a Cinder" is somewhat a way of demonstrating a catchy pop tune converted into metal. Fortunately, it's made up by the riff sounding a little like Metanoia that turns it into a solid metal song. On the other hand, Simone's vocals sound a bit flat and empty without the usual death growls, yet that song contains black-ish death metal influences that extreme fans would run away from due to absolute zero harsh vocals. Ballad "Tides of Time" is another one of the best songs of the album. It melts away the ice in your heart like an "act of true love" (Frozen spoiler, sorry) with Simone Simons' beautiful improving vocals that are once again the only type of vocals in this song over soft instrumentation that's much more appropriate.

The heavy aggression returns in "Deconstruct", which is fine, but the chorus lyrics are a bit too much like a poem written by an 8th grader as a social studies assignment. Still doesn't affect the album's perfection though. Next track "Semblance of Liberty" is the heaviest one on the album. Then we have one more ballad "White Waters" with Simone singing in a duet with Tony Kakko of Sonata Arctica. The title finale "Design Your Universe (A New Age Dawns, Part V)" is another long diverse epic with perfect vocals. It is pretty much one of the most epic songs by Epica, probably by any band! It recaps every lyrical and musical theme of the album, all in an ultimate description of the unique epic sound of Epica. The chorus sounds absolutely great with each one more epic than the last. My listening interest still hasn't been lowered even though it might not seem that way! But there's also a bonus track "Incentive", which is strictly Septicflesh-like symphonic death/thrash metal with no sight- I mean, hearing of Simone Simons.

Design Your Universe is the best album by Epica and one of the most epic metal albums I've heard in my life, despite a few tiny flaws. If I was still in my earlier epic metal taste, I would've rated it one of the best albums of 2009. This excellent experience truly is a whole newly designed universe!