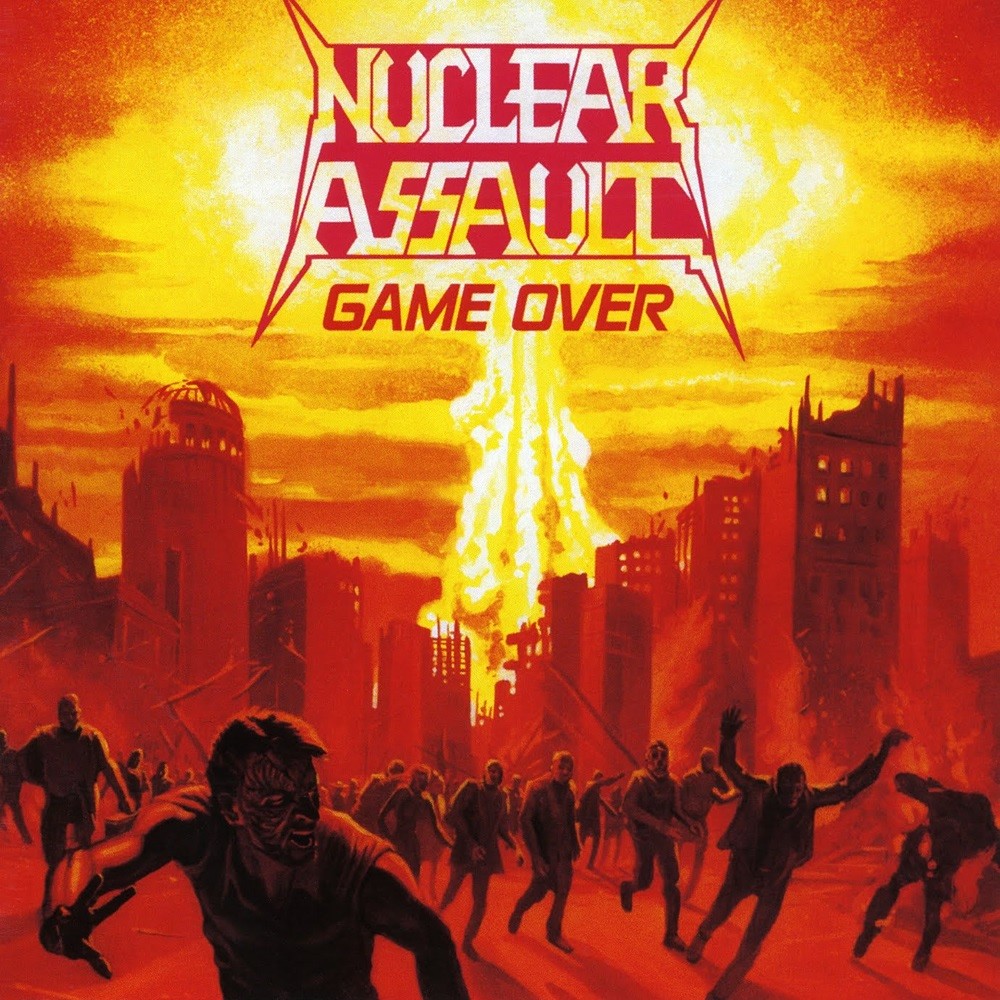 I have only had a limited exposure to Nuclear Assault over the years. I did see them support Slayer on the South of Heaven tour in the UK and the main thing I remember about their performance was them taking the piss out of hardcore for about five minutes by making lengthy introductions to songs that only lasted ten seconds or so. Their Handle With Care was also one of the first of those new-fangled CD things that I bought in the early nineties and was one of those albums that was kinda OK, but didn't exactly blow me away.

Game Over was the NY thrashers debut released in 1986 and is a more immediate and vital release than Handle With Care. It obviously has a hardcore/crossover influence with quite short track lengths in the main and an urgent, punkish delivery that conjures up images of frantically flailing bodies hurling themselves into seething mosh pits. Consequently the tracks tend to blur together and the album does have a breakneck runaway train quality to it and I don't say that as a criticism. They occasionaly thrust their tongues firmly into their cheeks as presumably a track like Hang the Pope is not to be taken too seriously, or at worst was designed merely to bait the PMRC (no bad thing that).

The guitar tone is not the best, it's a bit harsh and, in all honesty is a bit hard on the ears. Conversely Dan Lilker's bass manages to underpin the tracks and the ex-Anthrax bass man provides a solid foundation upon which the rest of the band can wreak their nuclear-fuelled destruction.

I must admit I enjoyed this much more than Handle With Care, despite the mediocre production job and it's energetic thrashing is just the thing if you want to work out some aggression. The band's fascination with nuclear annihilation is in full flow on Game Over and the album's best tracks are those Mutually Assured Destruction-themed tracks - Nuclear War being my personal favourite, but Radiation Sickness and After the Holocaust are both very good tracks. Ultimately a pretty good debut that I enjoyed for it's unapologetic aggression from a band that are really only seen as peripheral in the thrash metal history books.

In conversations about "Top Ten Thrash Metal Albums", Nuclear Assault's debut full-length tends to get mentioned in hushed tones as being "just outside this list.." or in the honourable mentions at least.  Revisiting it for the purposes of this feature review I certainly do not disagree with that sentiment and have heard no reason to change my review from my original four stars that I awarded this album on the site however many months ago off the back of this run through.  Considering this came out the same year as Master Of Puppets, Reign In Blood and Pleasure to Kill it is most certainly not on the same par as those classics.  However, I think what it lacks in a sense of refinement or focused aggression it more than makes up for with attitude.

What this album reminds me of is the chaotic sonics of the aforementioned Slayer with the energy and ethos of Overkill.  The gruff vocals of John Connelly have a different level of intensity to a Tom Araya and a much less sneery style than Blitz has, but the sheer determination in the riffing, drumming and plodding bass suggests a band who are doggedly forging their way in a genre where the early pace setting has already been done and they are simply just here to stay slightly ahead of the chasing pack out of pure enthusiasm alone.

Tracks come thick and fast on Game Over delivered in short bursts of two-and-a-half to three-and-a-half-minute rumbling thrash metal that has the requisite political, anti-religious or social commentary running through it.  This feels like an thrash album done with a grind mentality if we focus on the ludicrously rampant Hang The Pope or the tongue in cheek Mr. Softee Theme.  Immature though these tracks appear to be they are certainly not out of place on an album that feels it was written just for the band themselves and anyone else getting onboard is just a bonus.

So, whilst it may not be the pinnacle of eighties thrash metal, Game Over certainly comes across as honest and authentic to the genre vibe of standing up for what you believe in and making a lot of noise whilst you do so.