Cradle of Filth - V Empire or Dark Faerytales in Phallustein (1996) 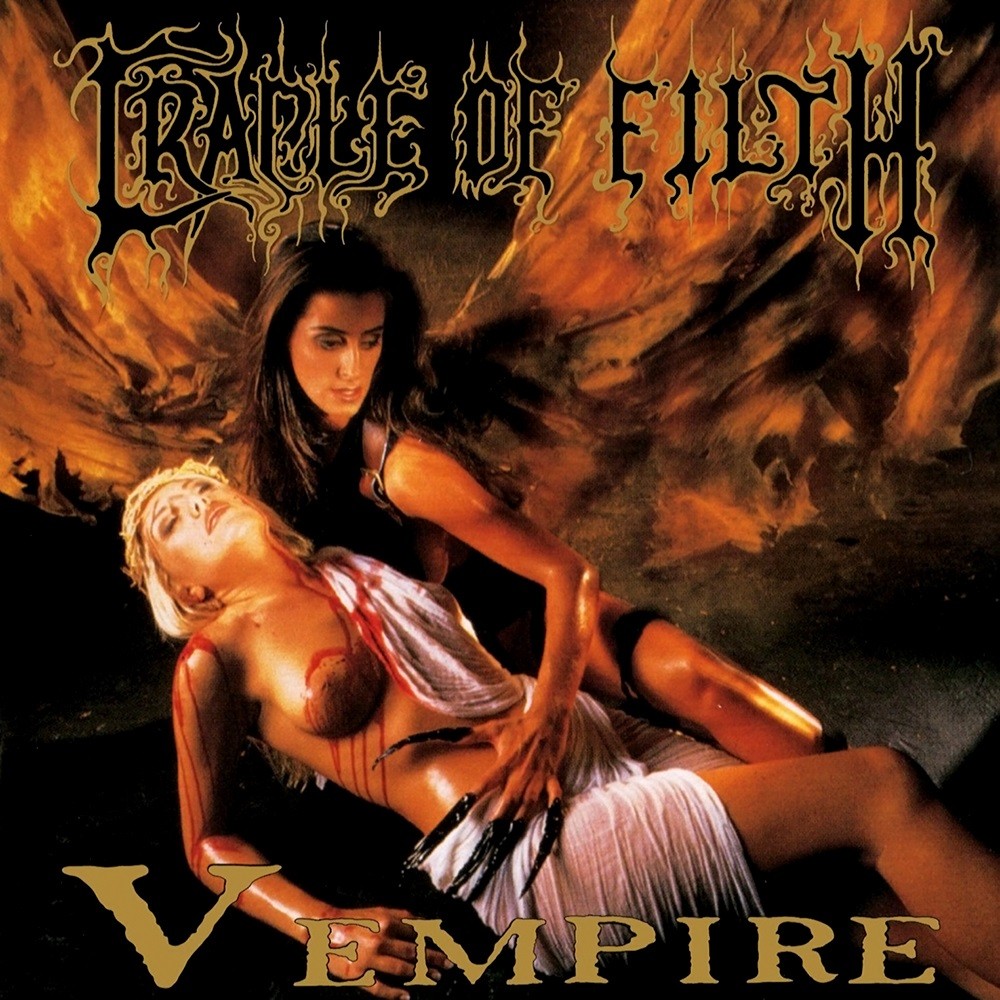 This is Cradle of Filth when they were fresh and exciting. Vempire is a dark, gothic piece of art.

Cradle of Filth are another example of a band that cop an enormous amount of criticism these days despite being hugely successful. Metal fans seem to have an unerring ability to go from a band's devoted fan to an arch enemy (excuse the pun) as soon as said band even remotely approaches the mainstream. Occasionally this betrayal is in no part due to the quality of the music (Dimmu Borgir comes to mind), but of course there are times when the reason the band approached the mainstream in the first place is due to the watering down (selling out) of their sound, in which case they had it coming. I will not for a second defend Cradle of Filth's more recent material, as generally it's pretentious and boring symphonic metal. But I will certainly stand up to anyone that says their early work wasn't a) important and b) damn good.

Their debut album not only made a huge impact on the metal community with its gothic, romantic approach to black metal, it also had a rather large impact on a particular 17 year old youngster. The blasphemous subject matter, varying vocal styles, the use of keyboards for more than merely atmosphere, the sexy vampire imagery (not to mention boobs in the album sleeve!) all appealed immensely to my teenage mind. Listening to that album now, its immaturity does show (I guess it hasn't aged all that well), but it's still a very enjoyable and nostalgic listen for me personally. I was prepared to kill (with fangs if necessary) to get my hands on a follow-up Cradle of Filth full length and while I'd have to wait a bit longer for that, this 6 track EP came along to quench my thirst for more.

I certainly wasn't aware at the time, but Vempire was never supposed to exist. The band had written and recorded an early version of Dusk and Her Embrace already but had decided to shelve the recording due to an ongoing battle with Cacophonous Records. Since the band were still legally required to release another album for Cacophonous, they decided to fling together a few tracks for an EP, then re-record the full length for Music For Nations. How incredible it is then (and credit to the band for their sense of pride) that Vempire is quite possibly the best thing Cradle of Filth have ever done. Rather than release a subpar see-you-later EP and then move on, the band cranked out a better-than-the-original re-recorded track and 5 brand new cracking compositions that far surpass anything they've done in recent years.

The first thing that got an overhaul after the debut is the production. Crystal clear and immensely powerful, Vempire has a near perfect mix that lets the symphonic aspect work its magic while never lessening the impact of the black metal. Damien Gergori produced some great keyboard work for Vempire with She Mourns a Lengthening Shadow the highlight. This instrumental would have made fantastic movie soundtrack and displays a talent that surpasses the average merely-accompanying performance found in most of symphonic black metal. I'd personally prefer that the guitars were a little more upfront but they're always audible and consistently effective. Dani's numerous vocal styles are put to good use and while his low cleanly spoken style may sound a bit over theatrical, his screams, growls and whispers are all fantastic. I know many people hate Dani for various reasons, but the guy has an immense vocal talent, especially when combined with his witty poetic lyrics. Sarah Jezebel Diva and Danielle Cneajna Cottington add their sexy English vampiric voices to proceedings and the result is dark, gothic splendour.

If you're judging Cradle of Filth after hearing only work from the last decade, I strongly advise that you pick up Vempire (and Dusk and Her Embrace). You may find a band that's perhaps a little more brutal than you expected and while the band's template may not have altered dramatically over time, this early line-up clicked far more than any that followed. A big thanks to Cacophonous for being such a crappy label. Their inability to support their own band led to the creation of this little gem. Highlight tracks are Queen of Winter Throned, Nocturnal Supremacy and The Rape and Ruin of Angels (Hosannas in Extremis).