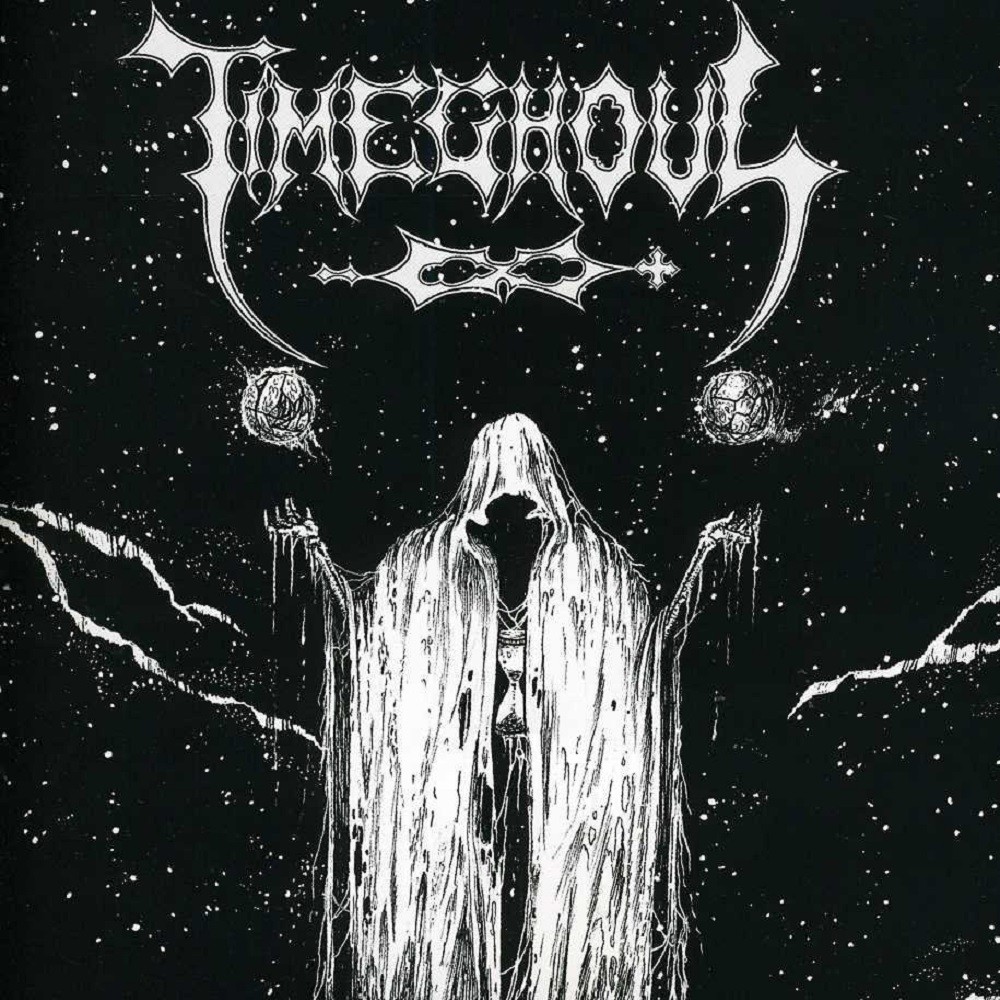 I guess I fall into a unique category in that I’m one of the relatively few extreme metalheads that can actually stake a claim to having experienced Missouri-based death metal outfit Timeghoul’s early 90’s demo tapes in the format they were originally intended to be consumed & at a time when they were still relatively current. The tape trading scene saw me picking up literally hundreds of demo tapes like these which I’d progressively work my way through as I enthusiastically looked for the next big thing in extreme music. I can distinctly remember my first time listening to one of the two Timeghoul demos & it would be a mainstay in my Walkman for some time afterwards while the other tended to drift past without rewarding me with many longer-term memories.

The 2012 release of the very imaginatively titled “1992-1994 Discography” compilation saw Mississippi-based death metal label Dark Descent Records compiling the only two Timeghoul demo tapes (i.e. 1992’s “Tumultuous Travelings” & 1994’s “Panaramic Twilight”) into one six-track, 44 minute release that covers the entire recorded career of this much-heralded underground band & it showcases the development of the Timeghoul sound particularly well with the two releases possessing very different styles & production jobs. They also offer very different levels of appeal for me though it has to be said & the compilation served as a great reminder of why one of these tapes would have been so firmly etched in my memory bank while the other would have drifted away without having anywhere near the same sort of impact. Let’s take a look at the two individually.

“Tumultuous Travelings” is a four track affair that sports a much less appealing production job than its younger sibling but this can be easily forgiven as it was par for the course for first demos in the underground metal scene at the time. The track lengths are significantly shorter too, clocking in at an average length of around six minutes. You can easily hear that this was a transitional release as the band were clearly still finding their sound. Two of the four tracks are fairly traditional in nature & wouldn’t sound all that unusual to fans of the classic early 90’s US death metal sound while “The Siege” & “Infinity Coda” see Timeghoul experimenting with a more progressive sound & touching on similar territory to the likes of Atheist & Cynic at times. There are some doomier sections included here & there but these aren’t as frequent or as substantial as they would later become while the use of blast beats is also a little more prevalent. There’s a consistent quality to this material that sees me finding enjoyment in each of the four tracks however the weak production job unfortunately prevents it from having much replay value for me. The more progressive tracks are clearly the most interesting with the doomier “The Siege” being my pick of the bunch.

The highly regarded “Panaramic Twilight” demo sees Timeghoul returning as a much more ambitious & experimental artist than they’d first appeared & also donning a greatly improved production job. The expanded track durations provide an initial indication that the band had expanded on their earlier progressive leanings with the nineteen-minute run time made up of just the two lengthy tracks. Now we see Timeghoul fully incorporating the experimental sound they’d hinted at on “Tumultuous Travelings” & I’d actually go so far as to suggest that there’s an avant-garde edge to some of the more twisted sections. The use of clean vocals & atmospheric synthesizers adds an additional layer of interest while there’s a much stronger death/doom component with diSEMBOWELMENT & early My Dying Bride providing most of the influence. The song structures are still a little bit loose & I can’t help but feel a little disappointed that we never got the chance to see what Timeghoul might have done with a big name producer & a professional studio production job but there was certainly enough truly original extreme metal on offer to see me repeatedly devouring this demo for a couple of months afterwards. In fact, listening back to it now I’ve found myself unable to shake the feeling that I’m listening to an underground classic of sorts with the epic career highlight “Occurrence On Mimas” being a true underground gem.

When taken holistically, “1992-1994 Discography” really is a tale of two cities. It’s consistently enjoyable however the real meat of the release lies in the “Panaramic Twilight” demo with “Tumultuous Travelings” representing nothing more than an interesting precursor intended to showcase the huge potential that Timeghoul possessed even in their earliest configurations. Thankfully “Panaramic Twilight” presents the listener with an emphatic enough statement to make the whole compilation worthy of every death metal fans attention.