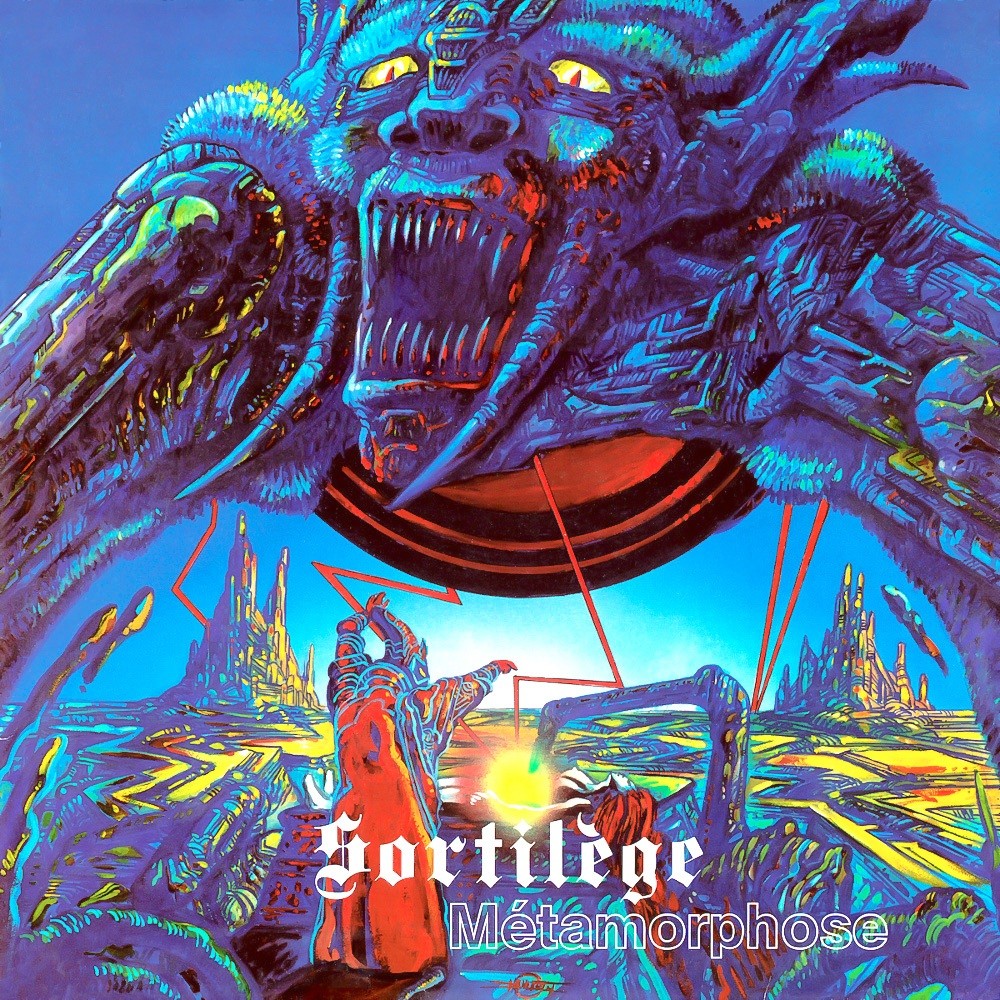 The early French heavy metal scene didn't exactly set the world on fire during the early 80's with only a handful of bands managing to make any sort of impact on the global metal market. H-Bomb, Blaspheme, Trust & Warning were amongst them however there was one band that well & truly led the charge when it came to French metal in the 80’s & that was Sortilège. Their self-titled debut EP has gone to become somewhat of a classic release over the years but I have to admit that I've always struggled to understand the appeal of what is essentially a fairly unexciting attempt to emulate the band’s NWOBHM idols, despite the fact that it’s still regarded as the pinnacle of French heavy metal to this day. Fans of Sortilege generally bow down in worship at the very mention of talented front man Zouille however I found his overly theatrical delivery a bit too much to take at times & that won’t change too much with 1984’s “Metamorphose” album which earned Sortilege a similar level of critical & commercial success to its older brother.

The band had certainly matured in the year since the EP with the production job being a remarkable improvement to put it mildly. This record sounds very good in comparison to a lot of the rougher sounding New Wave-influenced releases of the time & it’s not surprising that Sortilege were placed on a bit of a pedestal in the French metal scene. But that’s not the only improvement here with the song structures being much more complex with a noticeably progressive edge being apparent on most tracks. Where the EP focused predominantly on a more traditional heavy metal sound that had already been perfected by Iron Maiden & Judas Priest, “Metamorphose” is a much more ambitious undertaking. The use of odd time signatures was a clear focus & the rock solid rhythm section does an excellent job at keeping things sounding fluent & smooth despite the complexity of some of the rhythms. The two guitars are panned to either side of the mix which is a little annoying given that the all of lead guitarist Stephane Dumont’s solos seem to come from the left hand side of the stereo spectrum on my copy but the chops that he showcases here well & truly make up for it. He’s a very talented shredder in his own right & I find his performance to be one of the most appealing elements of the album despite the fact that some of his more lengthy excursions verge on over-indulgence. Another thing that leaves me scratching my head at times is that a few of the solos don’t have a rhythm guitar track underneath them & they definitely sound a little empty because of it. I’m not sure what the intention was there really but I think it was a strange decision.

Zouille certainly pushes his voice up into the stratosphere on this record but can I honestly say that I enjoy him on a similar level to someone like Queensryche’s Geoff Tate? No I can’t. His talent is undeniable but his delivery annoys me a little & he even touches on a European power metal feel on occasions which is not a positive thing as far as I’m concerned. I’d much prefer a more aggressive vocal style if I’m honest. Plus, I don’t think the song-writing is anything too special despite some creative instrumental composition. Musically this is a far more interesting release than the EP was though. The incorporation of the more progressive sounds of bands like Rush & Queensryche is most welcome & there’s also a strong Black Sabbath influence at times which wasn’t as obvious before. Japan’s Loudness often spring to mind for some reason too. I think it’s the progressive influence & the approach to some of the vocals. The fourth song “L’gende” even crosses over into full-blown power metal territory which can be a good or bad thing depending on your particular tastes. There are a couple of ballad-ish numbers included which don’t shy away from the cheese but I think I’m now starting to see why someone like Chuck Schuldiner from Death held Sortilege in such high esteem. I can hear some of the influence on the Death sound here (particularly the 90’s records)  & I can only assume that Chuck was able to accept & embrace some of the elements of the Sortilege sound that I struggle with.

I like this album a little more than the EP but I still can’t say that I enjoy the experience very much. Given the band’s reputation though, I’d suggest that our listeners should give “Metamorphose” a chance & decide for themselves.