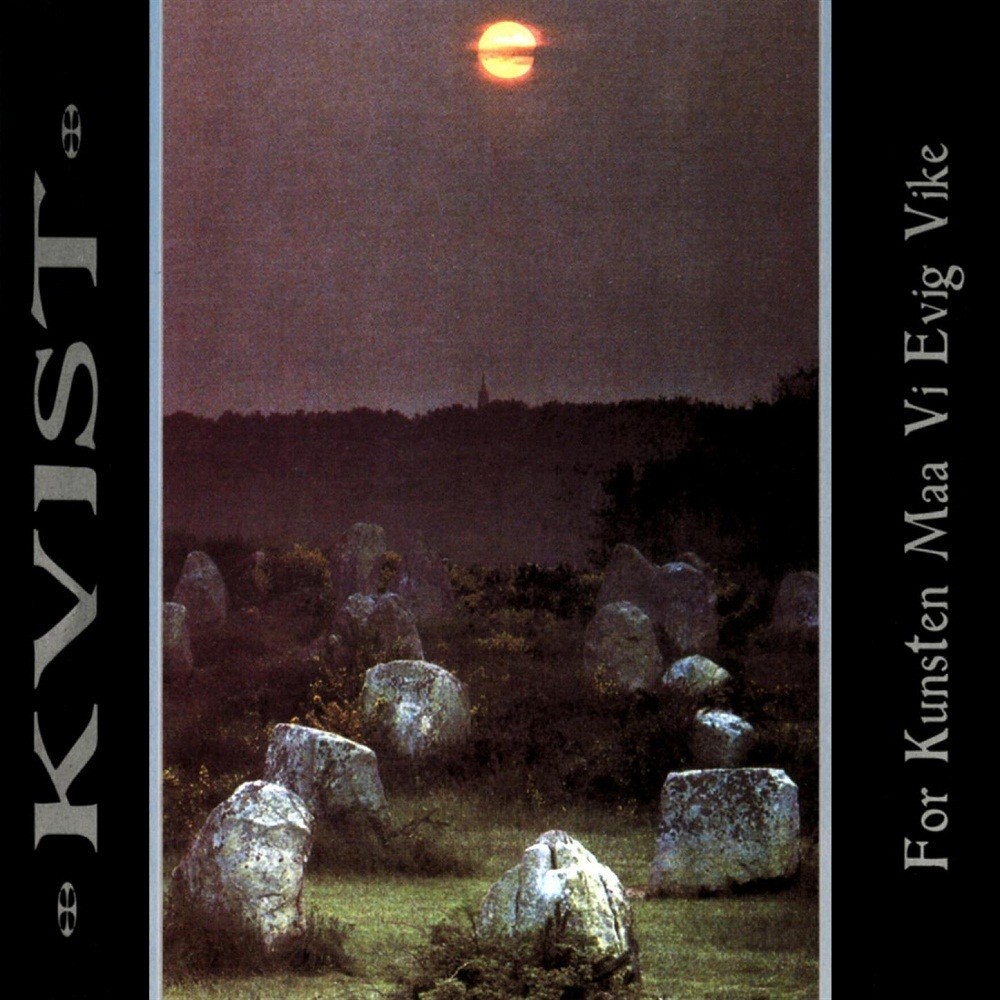 I generally like to kick my album reviews off by giving some insight into the background of its creators, as well as trying to place the album in question into some sort of historical context. In this case, that’s awfully difficult, as not only did Kvist only produce this one album before calling it a day, but there really isn’t much floating around the internet that would give us any sort of back story, let alone a reason for their demise. I can tell you that Kvist is the Norwegian word for “twig”, and I can also tell you that guitarist Trondr Nefas would go on to perform in numerous other bands such as Urgehal, Beastcraft and In Lingua Mortua. Other than that, information on these Norwegians is extremely sparse indeed, which is strange considering how treasured For Kunsten Maa Vi Evig Vike is amongst black metal fans. Kvist came from nowhere to unleash this underground gem before disappearing from the scene completely. It’s a shame that so many are unaware of its existence at all, but sites like Rate Your Music will undoubtedly assist in preventing this twig from becoming lost amongst a growing forest of lesser works.

To give you an idea of Kvist’s music, I guess the best comparison is Satyricon, particularly their awesome Nemesis Divina album. The riffs have the same epic, majestic feel to them and contain similar tremolo driven melodies. Tom Hagen’s vocals also remind me of Satyr yet he doesn’t have the same range, appearing limited to a monotone yet effective low end snarl. Drummer Endre Bjotveit cannot be put in the same class as Frost, yet his performance here is flawless if not particularly varied. If I had to pick another band that Kvist bring to mind it would be Hungary’s Sear Bliss (without the brass instrumentation), yet that might not be a useful comparison for the majority of readers considering their underground status. Bearing in mind For Kunsten Maa Vi Evig Vike was released in the same year as Nemesis Divina and well before Sear Bliss hit their straps, it’s safe to say that Kvist were no mere clone, and while this album didn’t make an immediate impact upon arrival, it has certainly gathered a large gathering of fans over time. I’m certain that this grapevine effect will continue as this release has a lot to offer.

The album has a particularly cool and evil sound with wonderfully crunchy drums, audible attention-grabbing bass lines, catchy yet cold riffs and melodies, all topped off with Tom’s snarls. Keyboards are also used to good effect, adding to the sound without overwhelming it or drawing attention to itself. It’s a nice production that balances that raw tone that black metal thrives within while giving every aspect plenty of clarity and room to breathe. One thing to mention above all else is that opener Ars Manifestia seriously kicks ass! The rest of the album is nothing short of excellent, but this track is head and shoulders above it all. If Kvist had managed to produce 6 tracks as good as this one, then I’d have no hesitation in giving For Kunsten Maa Vi Evig Vike full marks. As it is, the album probably lacks the variation needed to push it into the highest echelon of black metal releases, but tracks such as Ars Manifesta, Min Lekam Er Meg Blott En Byrde and Vettenetter certainly make it one you’ll want to track down. The recent Peaceville reissue should help you do just that!

Adding the word "melodic" to any particular genre of metal does not necessarily mean that it is a safe or somehow diluted version of what is more commonly recognised as being extreme.  There's certainly still plenty of bite to Kvist's only full length release from their brief time together that lasted just four years in the end. Whilst deploying keyboards the band stayed true to the cold barbarity of black metal, displaying similarities with many other bands of the same period such as Satyricon and Emperor.

What they were brilliant at was leaving a stamp of their authority on all six tracks on For kunsten maa vi evig vike.  Whether it was the burrowing and parasitic guitar work of Hallvard Wennersberg Hagen or the superbly forbidding and wretched vocals of Tom Hagen, all of the tracks stay with you in some way shape or form.  The atmospheric soundtrack of the keys adds a macabre and morbid aesthetic to proceedings really well and contributes to the flow of the album superbly.

From time to time, the pace drops into an almost black 'n roll stomp whilst the album also is not afraid to stay in almost ethereal paced realms on other occasions.  The signature bleakness of black metal is constant throughout but even for it's time the record has a more modern feel to it and one of the great regrets for me is that the band split up after such a short period of time and after only one very promising record.  Quite what we would have been treated on subsequent releases is left only to the imagination sadly.

Treated in isolation, as it has to be, For kunsten maa vi evig vike retains the authenticity of black metal and develops some very enticing and exploratory branches (the violin during Svartedal for example is a real treat) during just under forty minutes of running time.  Whether by design or not the drum sound alone sounds unique to me making sterile and claustrophobic rhythms whilst complimenting the more racing passages also.  The production job is sufficiently murky enough to provide a live feel to the album even when the more melodic and/or acoustic elements are centre stage.

This is what I used to think of with Black Metal. The loud driving drums with blast beats, undeniably unique black metal guitar work, undertone of low screeching vocals. This is the kind of album I would have listened to back in the early to mid 00's and then just put away remembering why I don't listen to black metal. This is not for me. If this was the only album of it's kind I would consider this a bad album, but there is a following for this style of music. I can hear there is talent here, and that there is really good overall sounds but nothing grabs me and keeps me involved. I keep falling out of this album when listening to it, for a few riffs and melodies I get drawn in but that only lasts for so long.

I actually was beginning to like the song Stupet, it had a good interlude with fun guitars. There is an unbridled anger that goes on for a bit too much and then takes a step back and pulls into a slow motion shot to watch as the anger erupts. You still feel the anger, just at a distance which I like but this only lasts for a bit before it becomes repetitive. It doesn't feel cohesive, there's no melodic transitions for any of these changes, it just tends to go on for way too long then turns the speed up or down but doesn't feel like much else changes. The end of the album was the worst part of that for me as I tried listening to the end a few times and I always just tune out, there is nothing that holds my attention at all.

This isn't a horrible album. I still give it decent marks, because it never did make me want to turn the music off however once the music was over and it was quiet I honestly didn't notice a few times. It's not a slog to get through, just entirely unmemorable for me. I can continue to put this album on but I will never remember I put it on, maybe this would be perfect study/homework music because it was actually decent as short drive listening music for background noise.