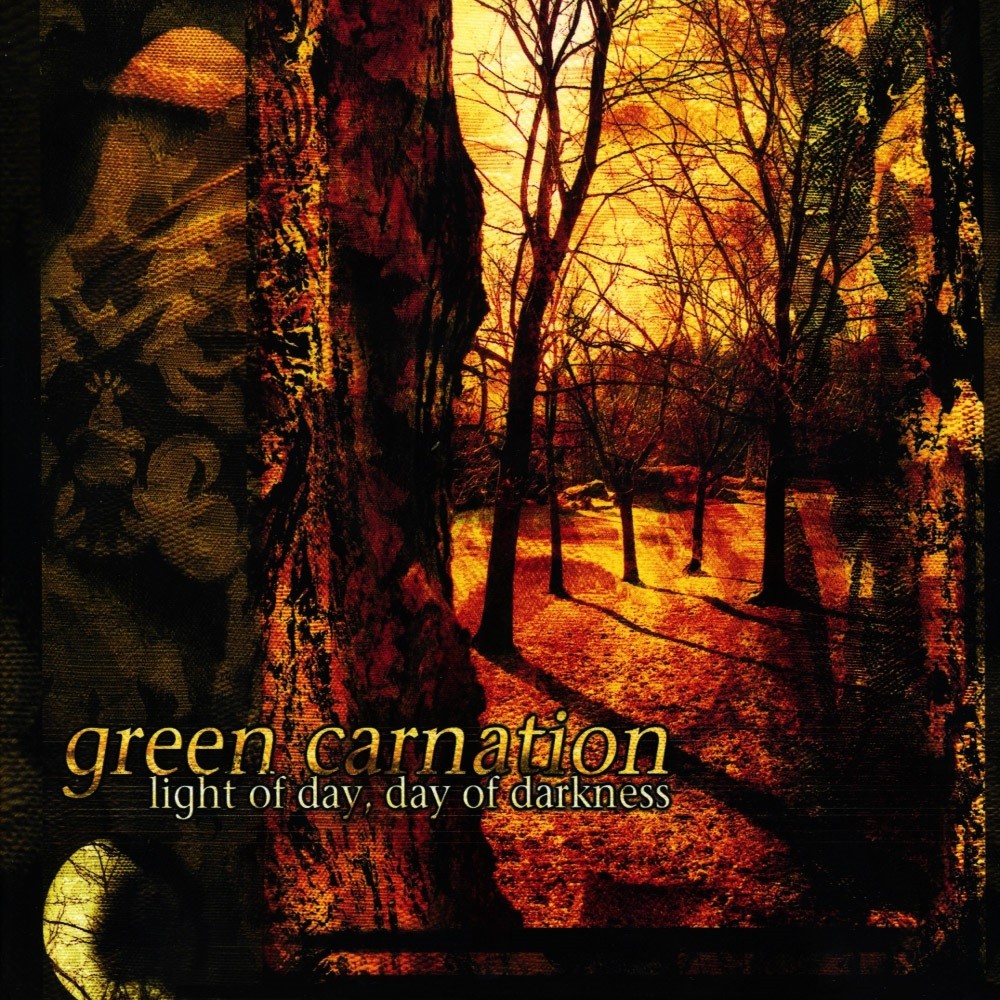 Progressive metal is one of the most characteristically difficult genres of all time, when it comes to playing, composing, and sometimes listening. If you're an expert at composing excellent progressive music, you'll create wonderful results, otherwise everything would be incorrect. If you're new creating progressive metal, surely a 10-minute epic would be difficult to start with, but it's still easy to keep interesting. It would definitely be more difficult to attempt a 20-minute track with half of it is long instrumental sections and the other half is filled with ambitious vocals, all with no coherent pace. You can even challenge yourself further with 30 minutes. Now 60 minutes, an exact hour, THAT's the ultimate challenge! You have to be the master of getting used to prog to enjoy this hour-long epic, Green Carnation's Light of Day, Day of Darkness!

Green Carnation's music for this album can be described as progressive metal with slight doom. Dark sorrow in the atmosphere fits well with the high-quality composition. Probably a third (20 minutes) of the track is instrumental while not straying away from the concept, with a continuous pattern throughout the progressive complexity. Unlike Dream Theater or Rush, the album is more doom-inspired than upbeat, including the mid-range vocals and the riffs that contain slow dark heaviness to fit nicely with the sorrowful leads. The album also includes saxophone, sitar, strings, synthesizers, and other instruments starting with "S", greatly enhancing the guitar and atmosphere.

It all begins with an intro that might've made any metalhead who bought this album on the month of its release think this is a brand new Dream Theater album. Of course, the heavy doom-paced riffing might make you think otherwise. The instrumental sections are enjoyable despite being colorless. Then death growls start roaming in as of around the 8-minute mark before the pace continues being changed. Another 8 minutes later, at near the 16-minute mark, the pace picks up and flows easily. Another 16 minutes later, sometime after the 32-minute mark comes an out-of-place stretcher; 5 minutes of female operatic chanting. That almost made drop the score a half-star. You could've added some Kreator-like thrash soloing, but nope!! Fortunately, the perfection is redeemed with more heaviness, at slightly over the 40-minute mark is followed by a two-minute acoustic/piano solo, before the excellent guitar solo I've waited for. Finally, the last 5 minutes are mostly soft instrumental and be considered the track's "end credits".

What an achievement in the progressive metal realm! You can probably guess Light of Day, Day of Darkness, as the longest track from a prominent rock or metal band, but it's surpassed by Fantomas' Delirium Cordia, Transatlantic's The Whirlwind, and Bell Witch's Mirror Reaper. Everything flows without being too loose or out of place (for the most part). This is a must-have for all progressive fans, and while I didn't start my prog journey here, for anyone wanting to start on this genre for the first time....welcome!

Favorites: The entire track (though I've struggled with the female operatic chanting)

When I first encountered the 2001 sophomore album "Light Of Day, Day Of Darkness" from Norwegian progressive metallers Green Carnation I was absolutely blown away. I simply hadn't heard an hour-long single-track album that not only kept me interested throughout but also flowed effortlessly through any number of different & equally impressive movements. In fact, it made such an impression on me that I saw myself reaching for full marks which is a very rare occurrence.

We're now a good twelve years down that track & I've finally gotten around to revisiting this progressive masterpiece & it's certainly an impressive release that oozes of class. I do have to say that it hasn't connected with me on the same level as it did before though, mainly due to the fact that when I consume it in one sitting I find several parts that don't appeal to me as much as others from a purely stylistic point of view but also because I don't connect with the vocals as much as I'd need to for this record to maintain its place in my Hall of Metal Glory. I do love the sheer ambition in taking on so many different musical styles in the one lengthy piece & it's quite astonishing that they've made it sound so natural & fluent.

"Light Of Day, Day Of Darkness" is a prime example of a release that only really needs the "progressive metal" tag because it celebrates the very essence of progressive music while not really fitting into any of your popular genres. Sure, you can definitely identify the influence of the Peaceville Three in the heavier & doomier riff work (particularly My Dying Bride) & there are even more smatterings of the gothic metal of Type O Negative however you're never left pondering as to what type of album this one is. Don't expect to be dazzled with obscure time signatures & technical gymnastics though. That's not the sort of progressive metal Green Carnation concern themselves with. They're far too busy creating wonderfully captivating soundscapes to worry about anything too showy & that approach has rewarded them with an timeless & enduring release that may not annihilate me like it did over a decade ago but still manages to have me nodding in appreciation of some fully realised potential.

For fans of In The Woods..., Novembre & Wolverine.

It is ambitious, to say the least, when any artist decides to record a single, elongated song and release it as an album. Now these sorts of albums can end up in one of two places: the first is being so pretentious that it stuck up its own ass, and cannot bother to write anything decent to connect themes together, or perhaps they don't have any themes at all. The other is that the album is heralded as one of the genre's crowning achievements. Take a look at Edge of Sanity's Crimson, Sleep's Dopesmoker or Insomnium's Winter's Gate.

In each of those cases however, it was much later into the band's career. People do not remember that Crimson was Edge of Sanity's fifth studio album. Enter Green Carnation, who decided to give it a go on their second album! And what an album it is! This band placed themselves among elite company with this record, and will go down as one of the 2000s best heavy metal albums.

And to start, we have to talk about compositions. As I have discussed across many reviews, a long song can only work if it feels connected together by some kind of melodic hook or idea, and that transitions need to be fluent and not feel like a rapid change of pace. Green Carnation pull this off remarkably well with the exception of a couple of places. The riff that occurs around minute seventeen is a little choppy with it's change it tempo and pulse. Fortunately the transition back to the first riff is executed with more efficiency. There are other transitions that do not resonate as well with me, specifically at minute twenty-eight and thirty-one. As a side note, I feel like that whole section at minute twenty-eight is probably the weakest on the record, mostly in part because the strings and synths are mixed very poorly without a rhythm guitar. But outside of those brief moments, I think Light of Day, Day of Darkness has some spectacular transitions and melodic ideas that modulate between a number of different locations. Its brightest moment is in minute thirty-eight, where the acoustic guitar and saxophone play off each other from the previous section, before coming together for the electric guitar to take over, allowing the saxophone to rest.

Speaking of which, let's talk about them. While the term Progressive Metal may be the best way to describe an album like this, I do not think that is completely true. This album was released in the same year as Opeth's Blackwater Park and while their are certainly elements of that album on display here, most of this record feels quite comfortable in a doom/gothic metal groove. The tempos are slow, the grooves are deliberate, and the booming, low end of Kijetil Nordhus' vocals reminds me a lot of Peter Steele of Type O Negative. But when the album gets progressive, it has some truly stunning moments. The first is in minute thirty-two, when the vocals of Synne Soprana come in and play off the saxophone. The harmonies outlined in that section are downright gorgeous. I am also a big fan of the Middle Eastern touches that show up in minute fifty-two. I'm not sure this section would have worked nearly as well if it wasn't for minute thirty-two.

As for the production of this record, I do have some quibbles. The first and most blaring and occurrent is the electric guitars that sound a little too tinny for my taste. I wish the mixing of the guitars were a bit more resonant and authentic, rather than being held back to allow for other elements to be heard. At least it allows for some pretty cool bass grooves. The percussion is not all that impressive, but it never had to be. The vocals are very well done, especially Synne Soprana's vocals in minute thirty-two. The saxophone does sound a bit muffled in my opinion. Other than that, the only other real issue I had was in minute fifteen, when a high pitched chime persisted for about a minute or so and it was really off-putting.

But these are minors nitpicks on a truly marvelous record. Green Carnation took a major risk going for broke this early in their careers, and even though the production is questionable at times, there is no denying that these guys were master craftsmen when it came to songwriting. The record is very subtle but gets it's point across with precision. It's always darkest before the dawn and Light of Day, Day of Darkness represents that dawn to me.