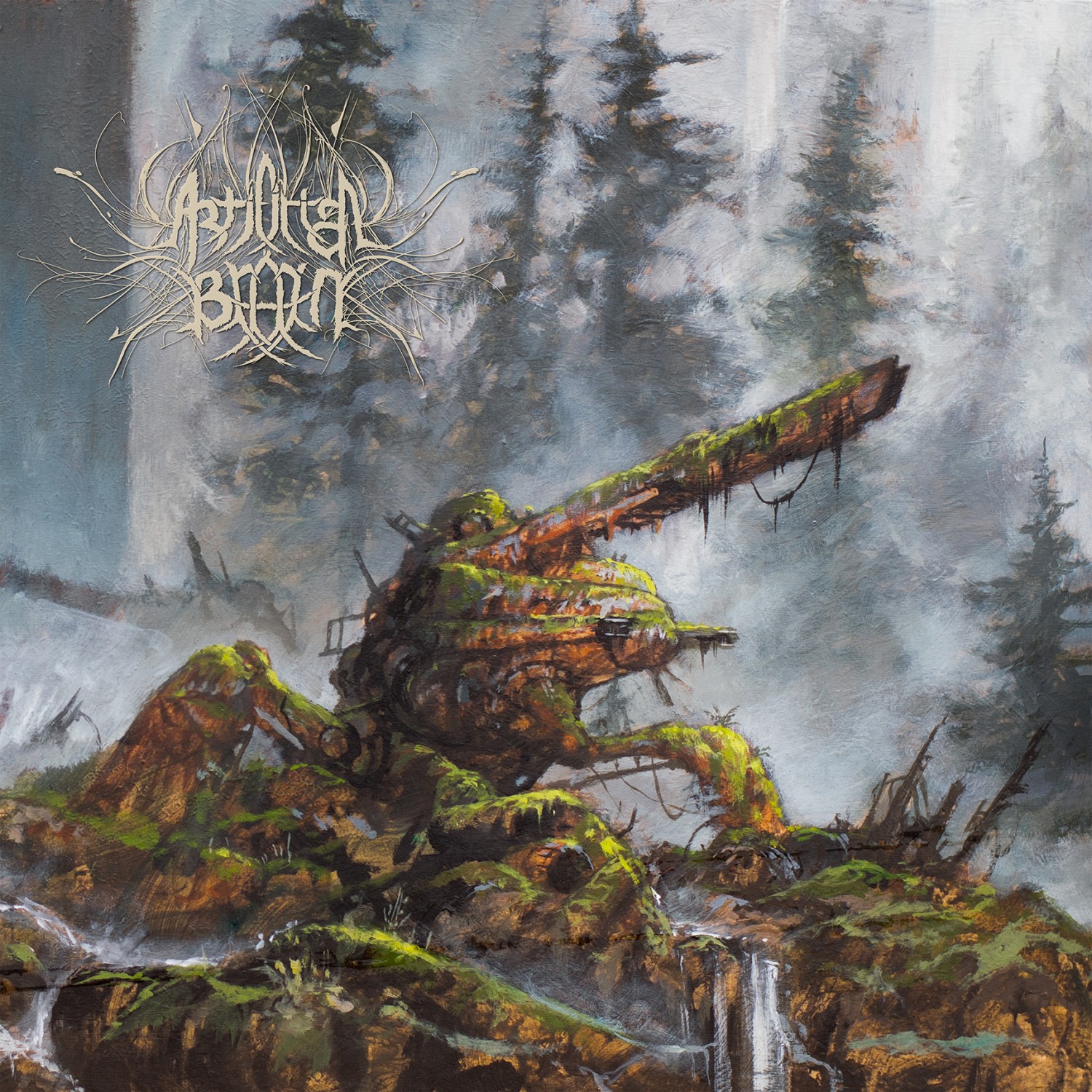 Over the past few months I've really started to regret spending the last decade being so fixated on 90s/00s death metal. For some reason I'd formed the opinion that a lot of modern death metal was too clinical and over-produced for my tastes. It turns out I was either completely wrong, or things have improved in recent years to the point where 2022 is seeming like a very good year indeed for the genre. Artificial Brain's self-titled third album is yet another excellent death metal release for the year, following up albums from Immolation, Pharmacist, Hath and Cosmic Putrefaction, amongst others. I must admit that I was initially a bit put off by the pig-squeal style of the main vocalist, but I've surprisingly come to enjoy them quite a bit. It also helps that there's some variation in vocal style across the album, which I'm assuming is due to three band members having vocals next to their name in the sleeve. Vocals aside, the music and production on this release are outstanding! Apart from the occasional use of that truly awful echoing garbage can lid sound that slam death bands have a tendency to use, all the instruments sound fantastic. Everything, including the bass, is giving room to breathe, which is admirable given just how intense this album is.

There's an excellent balance between brutality and memorability, technicality and cohesiveness, throughout this album. If you're even slightly into the more extreme side of metal music, this is band that should be on your playlist. I haven't yet checked out their earlier work, but I certainly will after this. As far as death metal goes this year, only the mighty Immolation's latest effort surpasses what Artificial Brain have achieved here. If you want a taste, check out any of the first four tracks, although I think Celestial Cyst is the highlight, as painful as that sounds.

It's no secret that the extreme depths of Death Metal and I haven't gotten along very well for the most part. Gory aggression just for the sake of it never manages to get me riled up, a general lack of melody or meaningful progression leaves me feeling uninterested, the deep gurgle or pig squeal vocals leave me rolling my eyes, and whenever a drummer detaches the underside wire from their snare my patience tends to run very thin. This trend held true for Artificial Brain's 2017 release Infrared Horizon, which is when I first heard of these rather popular newcomers from the generally impressive New York Death Metal scene. Fast forward to 2022 and things couldn't be more different when it comes to this new self-titled release, despite it possessing most of the traits that I generally dislike about this kind of Metal. Artificial Brain manage to take their brutally mechanical and desolate sound and pitch it in just the right way to make picky listeners like myself pay attention and get enthralled by its oppressively bleak world.

As much as I don't like talking about production and mixing because I'm generally clueless on the subject, I can't help but cite the differences in those areas being the reason why I'm way more fond of Artificial Brain than Infrared Horizon. Despite being incredibly dense and guttural, the production is mellower around the edges, creating a murky but still decipherable atmosphere that's very unique; at least for someone who doesn't dabble in Dissonant Death Metal all that much. The fact that every aspect of Artificial Brain's sound is woven together like an enveloping blanket is what keeps drawing me back to the album, since it allows so much space for interesting melodies, riffs, and calmer sections to come out of absolutely nowhere and feel right at home. It sounds organic and alive while still managing to have incredibly tight performances with nothing sharply sticking out, especially on the vocal front. Thanks to the assistance from multiple all-star Death Metal vocalists, the sometimes insufferable Brutal Death Metal growls are offset with with the help of slightly more raspy Death Metal growls on "Celestial Cyst" and a slightly cleaner, less gravelly performance on "Insects and Android Eyes". What really keeps Artificial Brain plowing ahead is its insane drum performance, which gets more impressive the more times you spin this album since there's so many minute details and different sounds coming out of the kit on every single song. Despite the closer "Last Words of the Wobbling Sun" adding a bit too much "ping snare" for my taste, it actually does work as a climax of the album as it's used sparsely throughout the album overall, which is definitely something I personally appreciate. Artificial Brain adds on the final layer of relentless riffing coming from multiple guitars coming from all angles and a powerful bass performance that tends to get lost in the shuffle if you stop paying attention to it, but fills out the bottom end of the mix in a satisfying and encompassing way.

Despite me praising this album for having production values and choices that go against the more extreme Death Metal normalcy, Artificial Brain is far from an approachable album to the uninitiated. It's a stormy, overgrown mess of riffs and the occasional, fleeting guitar melody or synth intermission that ebbs and flows at sometimes breakneck speed to form an amalgamation that's hard to follow at times, but is always oddly satisfying. Thanks to their newer and more dissonant and atmospheric production, Artificial Brain have moved farther away from their blistering Technical Death Metal influence, but have managed to maintain the overall complexity that keeps me interested in an album like this. Most of the album consists of controlled chaos, but the melodic breaks in the middle of the album on "Cryogenic Dreamworld" and "Embalmed With Magma" provide some much needed variety from the initial onslaught. Artificial Brain is very balanced in its approach despite it becoming a bit tiresome over the course of its 45-minute runtime, with ample time being devoted to chugging Death Metal riffs, turbulent onslaughts from the entire band, and respites of melody and atmosphere alike. It's always impressive when an album like this is able to draw me into its overall theme, which is why I've ended up coming back to it so much this year.

The biggest issue I've had with the more extreme Death Metal genres is the overall lack of hooks or melodies that give all the unorganized aggression some sort of resolution or payoff in the end. Funny enough, Artificial Brain circumvent that issue by not necessarily being memorable, but being consistently interesting across their entire album. While I think it's true that you'll be able to recite songs from your favorite albums from memory, sometimes albums that consistently give you an exciting listening experience despite not being able to necessarily recall too much of it are still incredibly valid. Sure, I'll vaguely remember the lead guitar and bass lines of "Celestial Cyst", the incredibly first riff transition of "Glitch Cannon", or the opening progression of "Embalmed With Magma", but it won't necessarily be stuck in my head for the next few hours. In Artificial Brain's case, though, I don't think that's too much of an issue considering how engrossed I get in the album every time I decide to start listening to it. I still can't entirely get behind the brutal filler parts of the album that tend to bog it down a bit too much for my taste, and the vocals are definitely something I have to consistently warm up to, but the overall presentation and aforementioned shift in production style has made this a standout in my extreme Death Metal experimentations. There's just so many cool, nuanced details in the performances and songwriting of each song, and especially the drums, that keeps me constantly guessing and excited about the well utilized intricacy of it all. Regardless of the cliché of attributing a certain atmosphere to the cover art, Artificial Brain really does live up to its visuals as it provides a dense and dismally lush experience that is equal parts fierce and grating as it is forlorn and expansive.