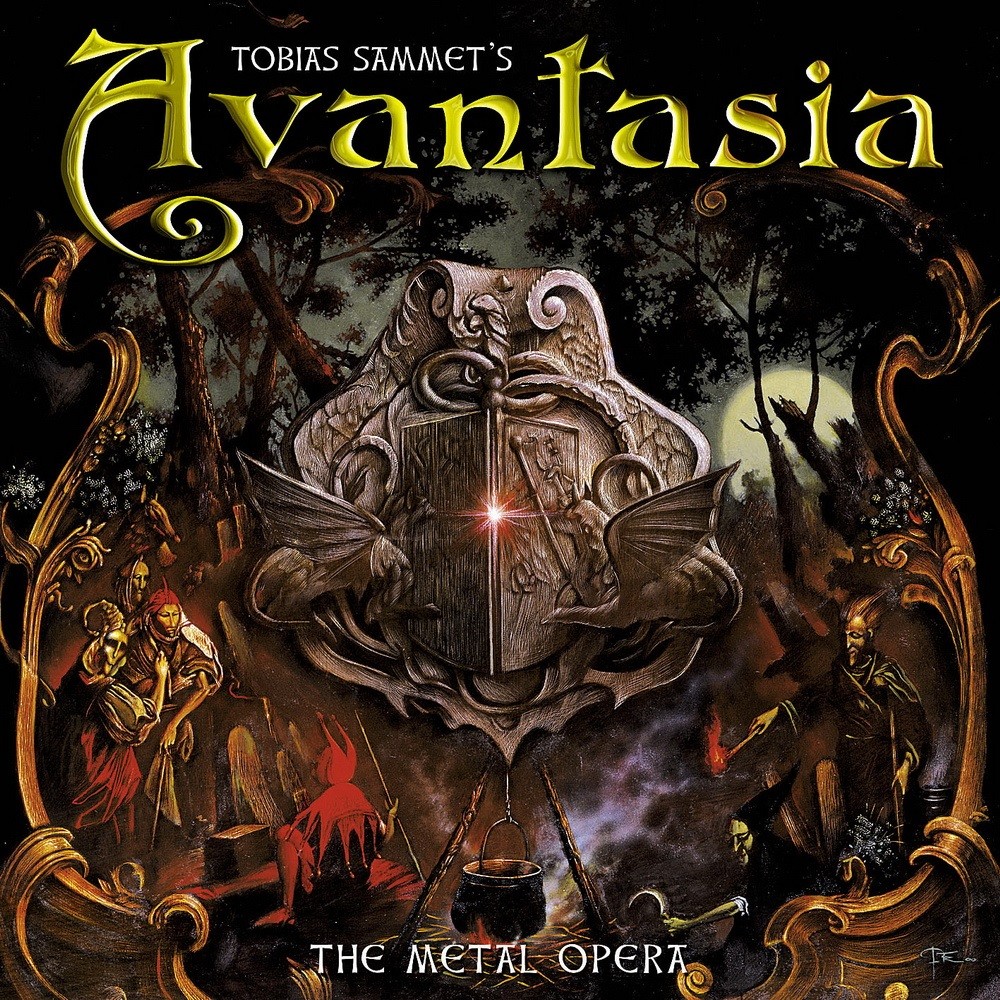 ...I mean, it's a little bit too easy of a sell for me don't you think? The university music graduate, who is also a devoted metalhead, would fall head over heels for The Metal Opera; not just this album, but also the entire concept of what that phrase entails. I mean, my favourite albums by The Who are Tommy and Quadrophenia. It was only a matter of time before someone came along and gave the rock opera genre a much needed crunch. It's even European power metal for god sakes! How can this fail? And it was Tobias Sammet making one of the first moves behind the legendary Arjen Lucassen.

Unlike Ayreon however, Tobias was going to use his new supergroup, Avantasia, in a far more conventional power metal strain; a sound that is certainly not unfamiliar to tales of mythical folklore, and over-the-top dramatism. The symphonic elements that engulf this album in atmosphere make you feel as if the stories being described are as epic as the music that accompanies it.

And it really pains me to say that I didn't like this more. Let's get one thing straight: The Metal Opera is not a bad album. In fact, when compared to the rest of Avantasia's discography, this is probably the ensembles most consistent record, with the only exception being 2016's Ghostlights. But it does have it's issues that need addressing.

First and foremost, the framing of this album feels very lackluster. When it comes to rock opera's, you typically end up with two potential outcomes: an album that is imperative to the hypothetical musical's success, or you end up with what is usually called "Incidental music"; basically it's music that fits with the themes, but is insubstantial for performances purposes. The Metal Opera is clearly made out to be incidental music, however Tobias cannot help but to include these out of place interludes that attempt to break across to the other side and it makes for a confusing tale. Part of this is the lack of guest vocalists. Oh sure, you have appearances from Michael Kiske, Sharon del Adel and even Oliver Hartmann, but their roles feels insubstantial, unless they are not. I just find it all so strange.

It's also not really helped by the fact that Tobias takes far greater vocal leads on this album than later efforts. Look, I have said in previous Avantasia album reviews that Tobias is typically the ensemble's weakest singer. And even though I find his performance here to be far more enjoyable than other records, it still doesn't compare to Kiske's guest features or Sharon del Adel on "Farewell". Sometimes I wish Tobias would sit out on occasion, like how Lucassen does on Ayreon albums, just to let these records breathe a little more. It would also certainly help for story purposes.

As for the music itself, I could just say "European power/symphonic metal' and you would already know exactly what you're getting into. It has lots of symphonic elements, plenty of extensive vocal ranges by both Tobias and Kiske, and grand anthemic choruses made even larger by a full ensemble. And they do sound quite wonderful. "Reach out for the Light" gets the album moving on a hot start, before allowing the room to breathe a bit for "Serpents in Paradise", while still maintaining the desired atmosphere. "Farewell" serves as a wonderful ballad, and the tracks "Avantasia" and "Sign of the Cross" stay varied enough to make the almost ten minute closer "The Tower" feel justified, as well as a pretty good outro; an outro that is slightly reminiscent of the opening track.

The way in which in the album is mixed is splendid: guitars are chunky and the solos never feel over-indulgent. Bass lines are fluent throughout the entire album, making for a very easy, digestible listen, even with the album's almost hour long runtime. The vocals are mixed very well; from the solo mixing of Tobias and the rest of the ensemble, to the full ensemble choruses, everyone has grit and power when they need it, even despite my issues with Tobias as a singer. The symphonic elements are pretty pedestrian minus the folk-esque touches on "Farewell". The only thing that really threw me off was the wild wind gusts that persist throughout "The Glory of Rome"; they really mess around with the mix as they are far too loud and drowns everything out. A bit of a shame because that could have been an album standout without them.

Avantasia were just getting their feet wet in the rock opera category with The Metal Opera and would see even greater success later on, most notably during the late 2010s. But despite this record being as good as it is, I find it hard to call it great. Because this album is sandwiched in between two of the great "metal opera" album's by Ayreon: Into The Electric Castle and The Human Equation. Even despite the rock opera tag, I do not see this as a starting point for people getting into power metal; definitely a deeper cut, but one worth checking out.

From 1998 to 2000, Edguy vocalist Tobias Sammet was dreaming of starting his own metal opera project, and he knew that was the right time to fulfill his vision, with an explosion of new amazing bands and the rise of metal veterans from the late 80s. It was his greatest opportunity to collaborate with many different music from new and old bands from the power metal scene. He and his recruits have united for the massive project that is...Avantasia!

The band members are each from one of the power metal bands I've reviewed in my Ultimate Metal Family Tree band challenge; Tobias Sammet (Edguy), Henjo Richter (Gamma Ray), and Markus Grosskopf (Helloween), plus Rhapsody of Fire drummer Alex Holzwarth. Amazing stellar musicians, though the guest singers are awesome too.

The Metal Opera begins with a symphonic "Prelude", which is a nice promising start. The symphonic parts continue on through the fast-paced "Reach Out for the Light". Tobias Sammet (Gabriel Laymann) sings with former Helloween vocalist Michael Kiske (credited as "Ernie") (Lugaid Vandroiy). Amazing vocal range there! Then the harsh growls of Virgin Steele vocalist David DeFeis (Friar Jakob) are displayed in "Serpents in Paradise". NO, I don't mean death growls, I mean a bit like ZP Theart (DragonForce) having a cold that makes his voice as gravelly as Tom Waits. Another interlude "Malleus Maleficarum" accents the operatic drama with narrations by Ralf Zdiarstek (Bailiff Falk von Kronberg) over a symphonic retake of a certain section from Edguy's mighty epic "The Kingdom".

Then we head to the empowering powerful "Breaking Away", once again featuring Kiske (I'm not gonna call him "Ernie", OK?). The amazing range of Kiske once again powers up the ballad "Farewell", especially during the final chorus. I guess that song is slightly better than Gamma Ray's "Farewell". There's also a verse sung Within Temptation's Sharon den Adel (Anna Held). "The Glory of Rome" has genuine vocal interplay between Ralf Zdiarstek and Rob Rock (Bishop Johann von Bicken) in the verses, while Sammet shines in only the chorus. The tune is a bit weak but the baritone-ish voice of At Vance vocalist Oliver Hartmann (Pope Clement VIII) helps make the song decent.

"In Nomine Patris" is another symphonic interlude, good but not as great as the previous two. The project's "theme", "Avantasia" leans dangerously close to the sh*tty radio-friendly poppy hard rock that would inspire Edguy to start moving to that sound for a couple albums. Fortunately, it doesn't come out that bad and works well as a great highlight. Then there's one more symphonic interlude, "A New Dimension", a bit more bombastic then all the other interludes, sounding a bit like Old School RuneScape soundtrack. "Inside" isn't so great, but it's notable for its piano work by Frank Tischer along with vocals by Angra's Andre Matos (RIP) (Elderane the Elf) and Gamma Ray vocalist Kai Hansen (Regrin the Dwarf). Both vocalists' amazing performances continue in the notable "Sign of the Cross". Edguy guitarist Jens Ludwig does a spectacular solo on that song and the towering closing epic "The Tower". Stratovarius' Timo Tolkki contributes spoken vocals as the speaking tower. A glorious ending...to Part I!

That's right, there a Metal Opera Part II!! The second part might be different but both parts have great content contributed by many musicians. A brilliant project thought of since the year Edguy's debut was released, 1997, The Metal Opera has done its part in saving metal from dying down and gave the genre and many bands more life!

Favorites: "Reach Out for the Light", "Breaking Away", "Farewell", "Avantasia", "Sign of the Cross", "The Tower"