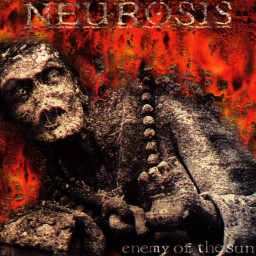 I can still remember the circumstances around my earliest significant experience with Californian post-sludge metal masters Neurosis. My brutal death metal band Neuropath had been rehearsing for an upcoming gig in the mid-90's & a fan had dropped by to watch us play after having been impressed by what he saw at a recent show. He was a true diehard death metal fanatic & well & truly looked the part too. After we finished rehearsing, a few of us went back to his place for a few beers & at the end of that drinking session he traded our drummer a Neurosis “Enemy Of The Sun” t-shirt for his Gorefest one. I remember wondering why our drummer was willing to accept such a trade given that my understanding was that Neurosis weren’t even an extreme metal band (*insert gasps of horror here). It certainly tweaked my interest however many years would pass before I would truly give them the attention required to fully grasp the genius behind a band that has gone on to become one of my all-time greats over the last decade or so.

Listening to a Neurosis record can be a pretty imposing task, even for their most devoted fans. Their music isn’t pleasant on the ear. It’s dense, nihilistic & full of pessimism & you almost certainly won’t come out of the experience feeling better about the world than when you went in. However, the potential for music to take me to dark & foreign places is something that I find very attractive & “Enemy Of The Sun” certainly does that. It’s arguably one of Neurosis’ most inaccessible releases as it seems like the band had very few fucks to give at this point in their career. I mean they couldn’t have produced something with less commercial potential than this record. It’s almost devoid of melody, it’s instrumentation & arrangements are intentionally drawn out but are inherently chaotic & there’s even a 15+ minute tribal ambient piece tacking onto the end of the album which doesn’t offer much in the way of hooks or variation. Neurosis really couldn’t have repelled the try-hards more if their lives depended on it as the savagery & discomfort this album offers up is even a challenge for me & I regard myself as a diehard fan these days.

“Enemy Of The Sun” sees Neurosis expanding on the sound they’d developed with 1992’s classic “Souls At Zero” album which is my personal favourite of their entire back catalogue. As with that record, the band can be seen to be pushing out into a wide range of experimental & atmospheric directions but never lose their grip on a filthy brand of post-apocalyptic sludge metal. You can clearly hear the influence of industrial metal artists such as Godflesh & Ministry on the wonderful opening track “Lost” with its use of dark samples being a real highlight while there’s a trippy, almost psychedelic feel to the first half of the post-hardcore inspired “Cold Ascending”. There’s very little melody on offer most of the time. You’re far more likely to be engulfed by dark tribal atmosphere or dissonant noise with Neurosis’ hardcore pedigree still well & truly worn on their sleeves & it seems like the band have gone to great effort to avoid presenting the listener with anything remotely resembling a comfortable environment.

I’ve always been a hhhuuugggeee fan of the vocals on Neurosis records & “Enemy Of The Sun” is no exception although the mix perhaps doesn’t allow them quite as much power as we would get on subsequent releases. Don’t expect any sweet vocal hooks here. You don’t even get any of those more introspective & laid back folky sections that would pop up in later years. Here we see the multi-vocalist attack targeting your cranium with a sledgehammer for almost the entire duration of the album in a relentless barrage of hate & misanthropy which leaves the listener feeling noticeably drained at its completion. This mental & emotional exhaustion is definitely accentuated by the unusual inclusion of the lengthy “Cleanse” as the albums final destination. It’s intended to be hypnotic & it certainly succeeds at that however there’s possibly not quite enough substance to warrant such an extravagant run time. I’m a big fan of tribal ambient music however even I find it to be a little over-ambitious.

Ultimately, Neurosis’ biggest strength is also its biggest weakness when it comes to “Enemy Of The Sun”. There’s so much quality & maturity in these complex & downtrodden soundscapes however their perennial quest to pull the listener into their dark & intimidating world can backfire at times. The intentional chaos in the song-structures can sound a bit jerky at times with the transitions not flowing all that well while the consistent intensity of this music can leave the audience with very little to grab onto & can subsequently go over your head if you're not paying close attention. As with all of Neurosis’ back catalogue, “Enemy Of the Sun” definitely requires multiple listens to fully understand & even then it’ll continue to open up new doors with every revisit. I love it for what it stands for as much as what it achieves. It’s an uncompromising & downright depressive take on sludge metal & is completely beyond the capabilities of the rest of the metal scene. I admire Neurosis for celebrating their own monstrosity & delivering a record with such depth & ambition even if it doesn't sit amongst their finest work.

For fans of Isis, Cult Of Luna & Amenra.