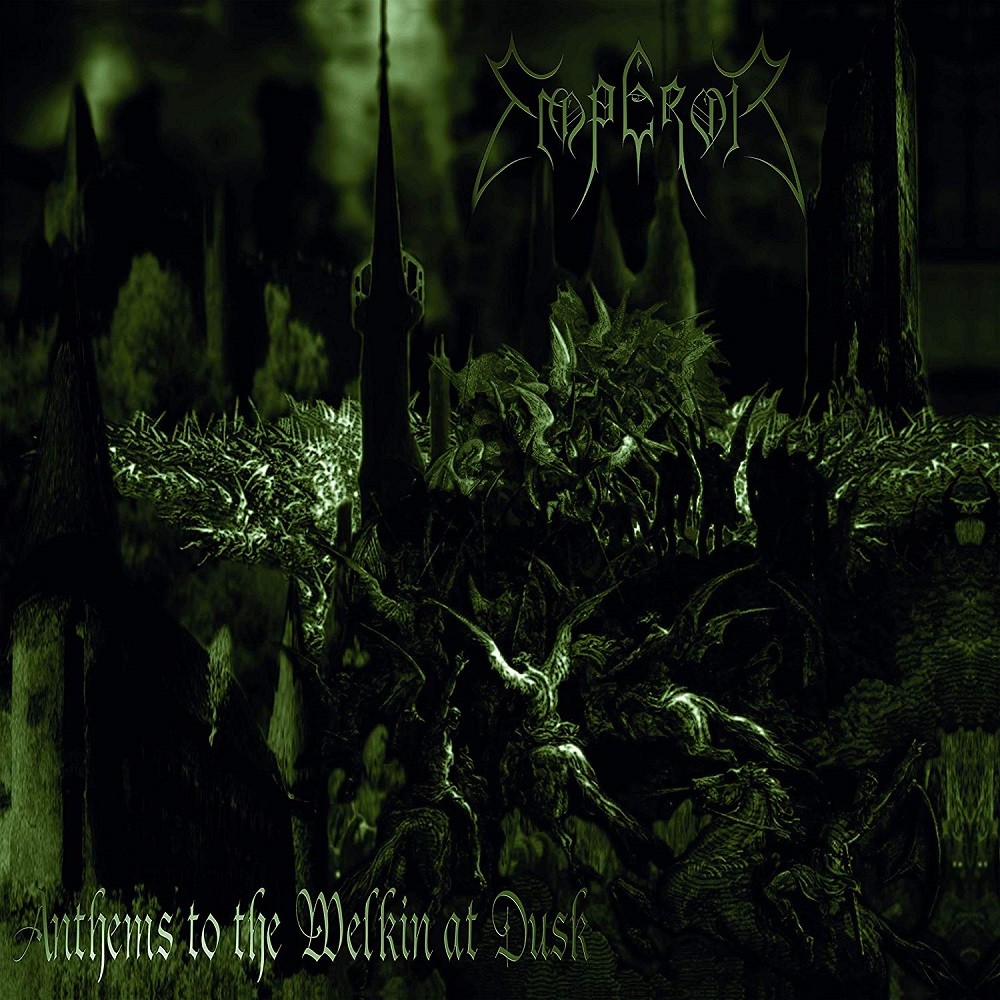 A swirling labyrinth of intense black metal, Anthems is one of the elite metal albums.

After the Reverence teaser EP demonstrated that Emperor had overcome their line-up issues and formed a devastating new unit (Ihsahn, Samoth, Alver and Trym), I was very impatient to see what these Norwegians were about to let loose. I figured whatever the end result, it would undoubtedly be highly ambitious, yet I was not prepared for just how intense Anthems to the Welkin at Dusk would turn out to be. In the Nightside Eclipse was a brilliant album, but its symphonic black metal seems like easy listening compared to this beast. Emperor pulled out all stops for Anthems by cranking the production up to extraordinary levels, with the symphonic aspect fleshing out massive metal compositions. I have to admit that the first couple of times I experienced this album, the sheer chaos and complexity of it all was just too much to take in. I knew it was something incredible immediately, and that the apparent chaos was somehow masterfully controlled, but with all the aspects of the band intertwining at such high velocity and with such abrasiveness, my poor brain was just struggling to keep up. Anthems to the Welkin at Dusk is an extremely loud album that wants to make your ears bleed, but if you don’t mind the loss of blood, there’s immense masochistic pleasure to be experienced here.

A major point of discussion for the album has always been the production. In theory, it may not sound that unusual to give each instrument exactly the same volume in the mix, but in reality that can result in an impenetrable wall of noise. Emperor was very lucky to get away with it here and at times I’m not sure they really should have. The guitars, drums, keyboards and vocals are all extremely loud and clear, but given that drums in general are far more dominating as an instrument in general, they threaten to suffocate the whole recording throughout. There are two main reasons why this doesn’t stop Anthems to the Welkin at Dusk from being critically lauded as one of the most important black metal releases ever recorded. Firstly, Trym’s drumming performance is outstanding! His blasting is ferocious and he keeps things varied and intense for the entire running time. Secondly, black metal never demanded that all instruments be audible at all times. There’s always something new and impressive jumping out of the production, giving the listener multitudes of things to grab hold of. Majestic keyboards, kick ass riffs and Ihsahn’s vicious vocals all fight for attention resulting in a blissful labyrinth of glorious darkness. This may sound frustrating on paper but each time you listen to the album it will make more and more sense until the collective genius becomes apparent.

Ihsahn’s vocals are vastly different to the high pitched shrieks found on In the Nightside Eclipse. His technique is now much lower and more venomous, but he also adds clean vocals regularly to good effect. His clean style can sound a bit awkward and pretentious at times, but they fit nicely enough within the tone of the music. His performance on With Strength I Burn in particular makes for an album highlight. The guitar techniques are also startlingly different to the debut with very few riffs going for the hypnotic black metal effect. Ihsahn and Samoth instead produce a constant flow of time changes and a general level of complexity not normally associated with black metal. There are quite a few early signs of the progressive take that Emperor would utilise on later albums, but Anthems remains firmly grounded in black metal. The keyboards still consist mostly of choir-like gothic backdrops, but there’s an extra level of classical sophistication which was expected after the Opus a Satana instrumental on Reverence. Ensorcelled by Khaos is a good example of this increase, with the symphonic aspect combining beautifully with the bass for a seriously grand outcome. You may have noticed that this is the first time I’ve mentioned the word bass. That’s because poor Alver got left behind in the cacophony of sound. Undoubtedly a shame, but he does raise his hand temporarily during the album’s less intense sections.

Anthems to the Welkin at Dusk starts off calmly enough with the Alsvartr (The Oath) intro building up magnificently. The transition into the complete savagery of Ye Entrancemperium has to be one of the most exciting moments in metal, and just when you’re thinking how brutal it all is, they step it up further with Trym launching into violent blast beats and Samoth and Ihsahn unleashing an awesomely killer riff. The infamous Euronymous gets credit for the opening riff which he wrote for an unnamed Mayhem song, but I’m fairly sure it would have sounded nothing like it does in the hands of Emperor. Other highlights include the still amazing Loss of Curse and Reverence and the absolutely monstrous With Strength I Burn, the latter which showcases all the elements that make this period Emperor so impressive in one 8 minute epic. Special mention should also go to closing instrumental The Wanderer. While the majority of versions of the album now come with the Reverence EP tacked on the end, I can’t help feeling that this negates the power of The Wanderer as a closing track. After the complex maelstrom that comes before it, it’s soothing yet haunting melodies are the perfect come down. Of course you’ll want to get another fix before too long, because Anthems to the Welkin at Dusk is an incredible experience by one of black metal’s elite bands.

Emperor is a name i've known for a long time in the Black Metal scene. I even absolutely love Ihashn's solo project. Then why has it been until now to fully check out Emperor's stuff? No idea, but i'm glad that i'm doing this challenge to go through albums I probably would have never listened to. This album is probably perfect, and I have listened to it non-stop over the last week and enjoy every minute of it. This also being 2020, it definitely holds up. Black metal has a way of doing that since it's in a world of it's own.

Anthems to the Welking at Dusk just fits everywhere. Listened to it driving, sleeping, walking around and just everywhere in the background. Doesn't work the best as just plain background music since it can suck me in and then I forget what I'm doing or I forget what I'm listening to and a softer more ambient part finishes into a loud screeching part and i'm scared a bit. Both not exactly negatives. First album of my challenge I really want to give a 5* but I have just started listening to it and may just retroactively go up later.

This is what I feel like Black Metal should be. I love the symphonic elements, and the dark spooky vibes were just pure bliss. I can't even come up with imagery for this album, but I still enjoy it. Some times it feels spacey, some times cold, some video game soundtrack, almost always a sci-fi/horror vibe. Looking forward to hearing more of this.

As it turns out, doing these album reviews not only puts me onto new records that I have never gotten around to listening to but also it seems it is highlighting former favourites that aren't perhaps ageing as well.   Anthems... falls into the latter unfortunately.  For the first time today, I noticed how confusing the whole experience of the album was.  All of sudden the sweeping keys and the grandiose swagger of the symphonic elements seemed hurriedly put together.  The once well-formed maelstrom of sound came across as being more a wall of noise nowadays.

Maybe my ageing brain is the part of the equation that is all out of fluster here, musical tastes do change after all over time.  But, as per my review of Dimmu Borgir's Enthrone Darkness Triumphant there really is a sense of their being an utter rejection of the concepts and notions of coupling poise and calm with direct and driving pace to give a more clear vision of what the direction an album is taking.

With more traditional BM the journey is much easier of course.  The raw, lo-fi ethics of the music lends itself well to repetition and sustained attack.  When Anthems...  applies the same ethos with symphonic elements to boot it loses sight of the need to temper one or the other.  It is like a pack of racehorses, neck and neck for the whole race, resulting in no clear winner.  Imagine a whole day at the races where every race was like that, where nothing was clearly putting daylight between itself and the rest of the pack.  This is how the track listing feels to me now as I listen back.  Everything kind of becomes one.   Just a singular charging mass that allows nothing to really standout or for any leader position to change hands over the course of what soon becomes a slog.