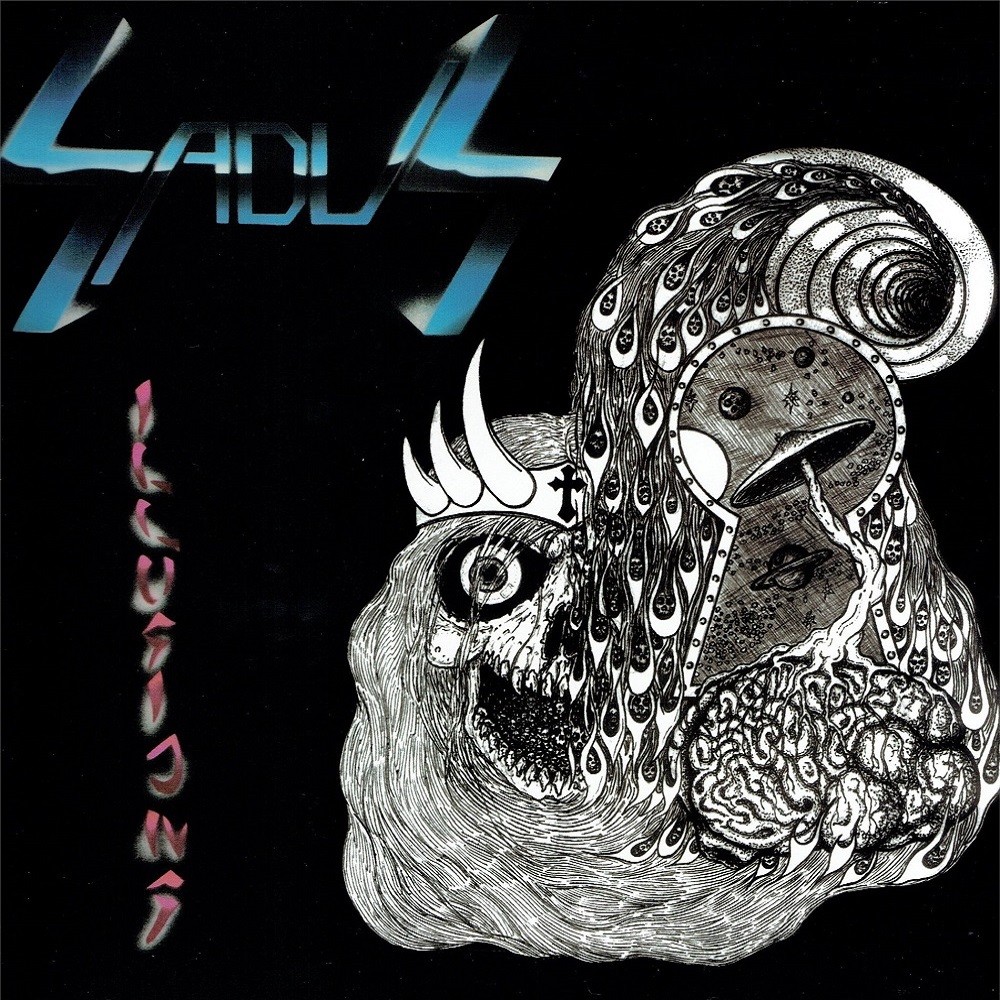 This is shredding! For some reason I'd never managed to hear Sadus until the last couple of weeks. I'd always assumed that they were a technical, almost progressive thrash metal band, but that couldn't be further from the truth. Illusions is ripping, face tearing thrash metal in the style of Kreator and Sodom at their absolute fastest. Steve Di Georgio's bass is awesomely present. The riffs are one after another unrelentingly mosh worthy and Darren Travis' vocals are some of the best I've heard in the genre. He manages to sound completely and utterly psychopathic while keeping things together, like an angry Mille from Kreator. Last but certainly not least, Jon Allen's drumming is insanely good, managing to mix things up at extremely high speed.

The album lasts under thirty minutes, Reign in Blood style. And just as on that classic album, it doesn't feel at all disappointing that it's so short. It just makes you want to press play again. Certain Death, Torture, Hands of Fate and Illusions are all cracking tracks, but there really aren't any low points on what this blistering and thoroughly entertaining album. So glad I finally checked it out!

Sadus need to slow down if they don't wanna get pulled over by the cops!

In all seriousness though, Sadus' debut record Illusions is one that tries to do too much in the name of progressive thrash metal, but misses the mark by having some of the worst framing I've heard in a late 80s thrash metal album. Songs will sporadically change tempos, forms and styles on a whim with nothing to suggest there was even a hint of a through line considered in the writing process. Every song begins with a moderate groove and may turn into something great, but without warning the tunes deviate into this blistering fast thrash groove that is persistent throughout the track. The intro's are rarely referenced again, either lyrically or thematically and it makes them feel like Sadus just wasting our time.

The production is clean and you can hear every single note played by the guitar, percussion and even bass. And while I am a little more lenient towards unbridled noise collages by the lead guitar solos in this thrash metal style, the vocals sound fucking atrocious! It's everything that I hate about Tom Araya's slurred vocals on the first three Slayer album's, but on a line of blow. There is zero diction to the delivery. I could perform the vocals on this record with the same level of proficiency on the day I had my wisdom teeth pulled out and my mouth was filled with cotton swabs.

I think that in 2022, with bands like Vektor now apart of the lexicon of tech-thrash, I have become increasingly intrigued by the tag of that subgenre as being more progressive. However, like with death metal, that might not always be the case. This is bog standard thrash metal that is propped up only by some cleaner production than its contemporaries. Those opening grooves at the beginning of each track make me hopeful that Sadus might do something unique, but every time it just goes back to the same idea as before. For me, Illusions is the equivalent of a restaurant with good food but horrible service; you may ask yourself why you don't go back to that place on the corner as often because the food is really good, but then you meet the people who work there. And in this case, I continue to fall for it nine more times. When will you learn your lesson?

The album that allegedly got the band signed to Roadrunner after shifting some 7,000 copies is to all intent and purpose pure unadulterated violence. Now, I will not go off and join my peers on the site in lavishing praise on Illusions. In fact, I will highlight that this is some sloppy sounding thrash metal even by late 80’s standards. Yes, I get that this is a massive part of the appeal and I enjoy some raw and energetic thrash / proto-death metal as much as the next man or woman, the fact is though that there are a couple of major distractions on the sound on some tracks here.

The drums start to sound like claps as album opener Certain Death gets to around halfway through, just for a few moments, not for the entire track thereafter but nonetheless I find this off-putting and sort of ruins the start of the album for me. I am also not convinced that the band had their timing correct for all the tracks. Granted it is so ridiculously fast and has the pacing of a jet engine that you hardly notice but when the band get to a less high tempo pace and go a little more industrious (not technical - more on that in a minute) is where the cracks do start to show. I will put this down to the maturity levels of the band and this being their first full-length and will also caveat that when they are on point – which at times they are – they are unstoppable. I am thinking some of this is also down to the over-reliance on DiGiorgio and his bass which I am nearly sure causes flux in the rhythm and timing on more than one occasion.

This “technical” tag bothers me that I see get associated with the release also. The fact that this album has a heavy bass presence does not mean that this is a technical thrash metal record. I see DiGiorgio’s input as being almost a third guitar – most certainly a second rhythm guitar that makes the frenetic pace sound a lot meatier than it would otherwise. You could argue it gets all proggy on the opening bars to the title track but again this does not make it technical, just well-played.

Sadus’ debut is not for me in all honesty. As much as there are principles of thrash metal here that I would largely praise and defend in most circumstances, Illusions does precisely as the meaning of the title suggests and tries to distract away from its issues with pure speed and violence and it just does not work for me.

In my opinion, thrash tastes better as an underground dish, that's part of the appeal of some thrash bands that I'm glad to discover. One of those bands is Sadus, who have made some of the wildest deathly tech-thrash around!

That's right, thrash has reached the ultimate limit of furious velocity! This is the beginning of my review journey from their chaotic debut Illusions (also known as Chemical Exposure) to their swan song-ish album Out for Blood. Darren Travis performs lightning-fast riffs and awesome raw vocals, while Steve Di Giorgio foreshadows his later supreme bass talent. Scream "Slayer" all you want, but with Illusions, Sadus has played some of the fastest, most technical and memorable thrash I've heard in my life.

"Certain Death" begins this album with a cyclic song structure. Then two minutes of thrash greatness awaits in "Undead"...for the first half of the song; the vocals don't come until the second half that's still fast and heavy. "Sadus Attack" is a short b*lls-out attack.

Coming up, "Torture" sounds fitting for this singer's mood. His shrieks pierce your eardrums, reminding me of the black metal style I'm not a fan of, but it fits well for this thrash style. There are times when the bass is more audible than in other songs, especially when dueling with the guitars in the solos. There's another flawless song, "And Then You Die", despite its two-minute length. More technical extreme riffing can be found in "Hands of Fate" inspired by peers Slayer and Kreator.

"Twisted Face" starts with a Jaws theme homage then attacks as one of the fastest tracks here. "Fight or Die" is also often f***ing fast. The title track has the most prevalent slaughter aggression. The ambient outro "Chemical Exposure" (title track for the album's reissue) is unexpected, but you don't care because you're already nicely wiped out.

Regardless of the band's fate, Illusions should not be ignored as probably the fastest and most furious thrash album I've ever heard. If we're rating this by percentage, I would give it 97%; the 3 points taken off are for the mixing quality, but hey, this is Sadus' 80s debut. All minor errors aside, this is a perfect thrash album, like "in your f***ing face" thrash that very few bands executed so greatly. Any fan of Dark Angel, Slayer, or Kreator, should take a break from those bands and listen to this holy grail of thrash!

Sadus and their Illusions album are, unfortunately, one of those bands with whom I have passed like ships in the night. I say unfortunately because it's frantic, headlong thrashing is right up my street, as they say. It incorporates elements of early death metal into the teutonic-inspired thrash of Kreator and Sodom in a way that is heavily indebted to Possessed's Seven Churches. One thing that really does stand out on Illusions, in a way previously unheard on a thrash release, was the bass playing of Steve DiGiorgio which almost seems to double as an extra rhythm guitar. Darren Travis' deranged, screaming vocals just sound demented (in a good way), as on the track Torture. The riffs are cranked to hyperspeed and the solos are searingly savage, in a Jeff Hanneman kind of way. With song titles like Certain Death, And Then You Die, Twisted Face and Fight or Die I think we can tell where the band are coming from. Despite hailing from LA, I guess these guys weren't hanging out on the strip with Mötley Crüe and L.A. Guns!
Any fan of the faster, more aggressive side of thrash and albums like Reign in Blood, Pleasure to Kill and Darkness Descends should certainly grab a copy of this. I don't think they would be disappointed.