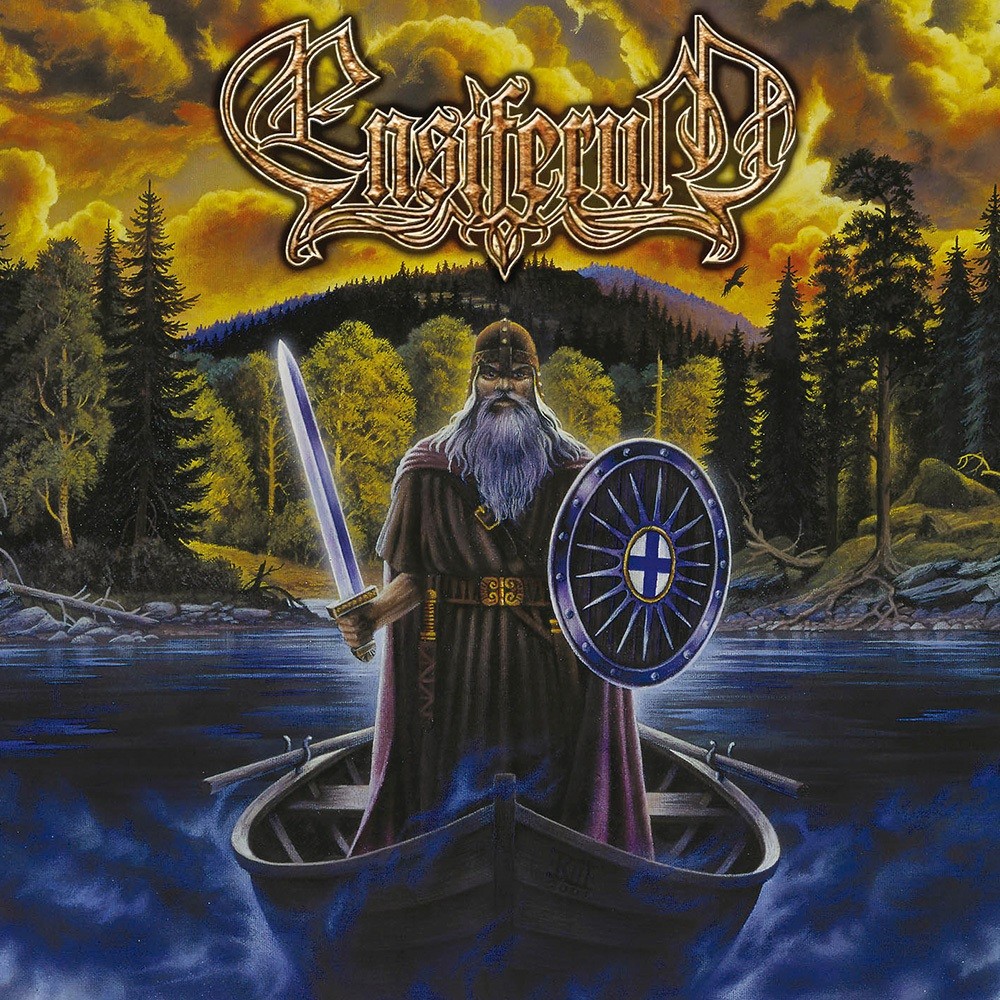 Ever since Bathory's Blood Fire Death, viking metal was formed to combine two d*mn cool things, vikings and metal. Cool combo, right? But how would you define viking metal? Maybe some much different? Like instead of loud aggressive folk-black metal Nordic warriors fighting for the power of the mighty Odin or trolls pillaging Christian villages, you want some cleaner but killer melodeath/thrash metal about a viking hero's solo journey to fight the goblin king? Is that what you want?! HUH?!? Well you and I are in luck! See I don't get the appeal of the original folk-black style of viking metal, but if those themes are in a couple genres I tolerate, I'm up for that! At least I was in my earlier epic metal taste. It's a real shame that I've never and still haven't had enough full interest in this band, but I'm still up for this part of my band challenge. Since forming in 1995, Finnish metal vikings Ensiferum have been making great progress in their journey with almost 8 albums to date, and it all started with their epic self-titled debut...

So why I am thinking so much about this band when I didn't have enough interest to listen to them full-time? Well that is disappointing, but now I'm questioning this slight lack of interest because of Ensiferum's intensely excellent debut making me up my optimism a little bit. Many of the songs are sing-along metalized viking hymns with folk/melodeath guitar riffing and memorable chorus to be found in the actual viking metal, all forged in an enjoyable sound.

Let's begin with the two-minute "Intro", which starts lightly acoustic before the electric guitar enters with a medieval tone. Nothing else happens, but it's the perfect intro to start this album. "Hero in a Dream" kicks off the action as one of the fast and most amazing songs in the album. The riffing is fast, alongside masterful drumming. Vocalist Jari Mäenpää, who would leave the band after their second album for Wintersun, does mostly harsh vocals while having an excellent clean passage. The more brutal edge doesn't give the song the medieval touch the other songs have, but it's still awesome!! The journey continues in "Token in Time" which flows slower but still has its strength along with heavenly screamed choruses a glorious clean bridge. Then comes "Guardians Of Fate", where the steel-armored viking rides his boat across the stormy lake.

The 2-parter "Väinämöinen" suite starts with "Old Man", which is slower but still amazing. Though it's emphasized more on actual songwriting than technicality. Part 2, "Little Dreamer" continues the medieval elements that help make the debut a true extreme medieval viking metal album. The amazing 7-minute epic "Abandoned" can almost be considered the viking-melodeath "Bard's Song" (The Hobbit). Next song "Windrider" is an extreme folk metal song that can blow your face much harder and faster than the mightiest wind and scream at you to become a murderous viking. Maybe not murderous, but still a viking...

The incredible "Treacherous Gods" starts slow but becomes another fast song with great amounts of harsh vocals and short clean vocal passages. "Eternal Wait" is a slower melancholic ballad-ish song. With a song title like "Battle Song", you know you're up for epic sounds of viking metal war. That's what that song has! The atmospheric yet heavy "Goblin's Dance" is one more battle song against the goblin king and worth singing along to its upbeat glory. What an epic experience those last two songs have been!

Ensiferum's self-titled debut has served you a great feast of viking(-themed) metal. Ensiferum have beyond exceeded my expectations more/less than I probably would have a few years ago. It's an excellent combination of heavy yet melodic riffing, impressive folk sections, and atmospheric verses and choruses worth growling and singing along. This mix of folk/viking/power metal is great for many fans of those genres. If you wanna start your Ensiferum journey, this is definitely the album to start, followed by their second album Iron, and not just for the purpose of chronology. Check out this fun album for the heart and soul of a viking warrior!

Go on an adventure...

Press play and embark on a journey across torrid seas to ancient unexplored lands. A faraway place with brave men, apocalyptic skies and destinies awaiting us all. This album is pure, wondrous fun - an escape from unmagical day-to-day boring life. It takes you to a place where anything in your imagination is possible and the power of music can conquer all enemies, elements, and personal struggles. This album, my friends, is what I like to call EPIC.

But don't take that to mean it's all glory, sunshine and rainbows. Jari, Markus and Jukka have created a work that is epic in the same way as the best Dark Fantasy novels, with excellent tension, pacing and moments of intimate pain and struggle to make the adventure all the more empowering.