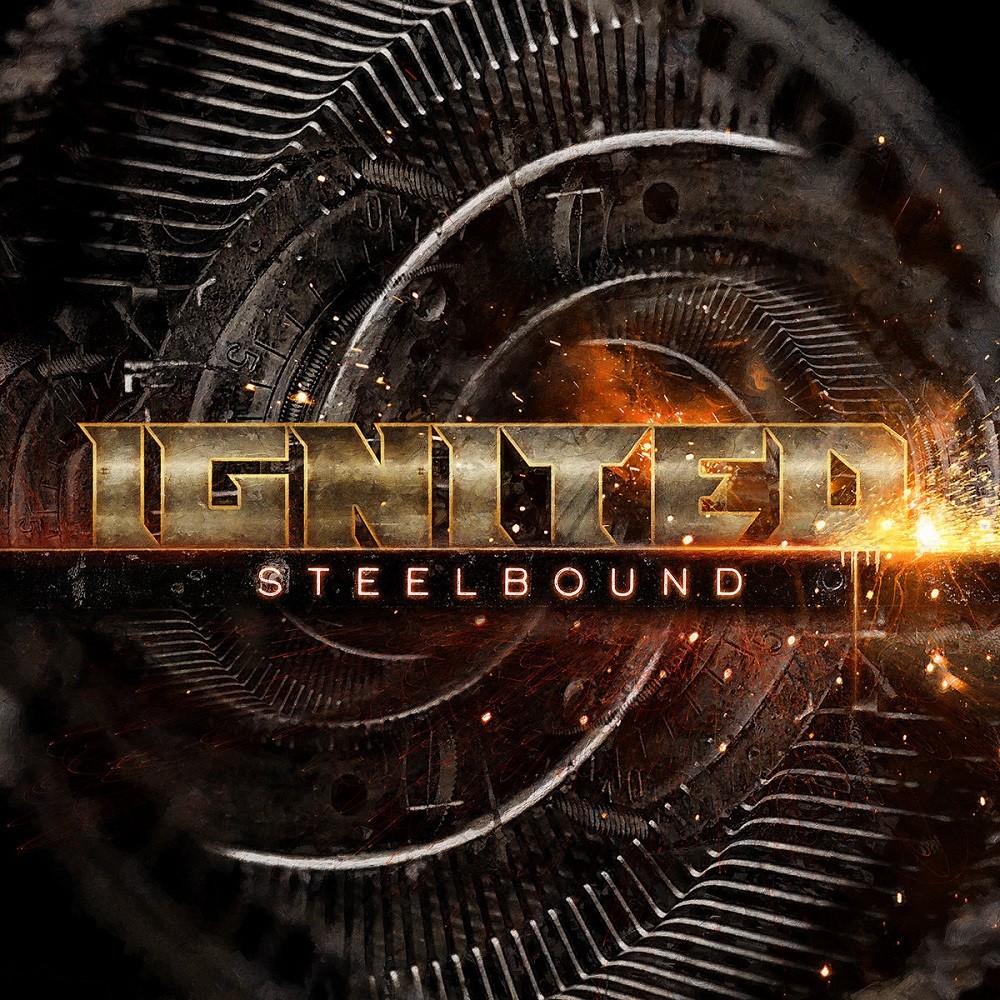 It has to be a difficult, maybe even borderline impossible task to choose to play no bullshit, traditional Heavy Metal in the more modern Metal landscape. The genre has been explored and refined so much since the late 1970’s and early 1980’s that it’s slightly pigeonholed itself compared to other, more flexible genres. For better or worse, you know what you’re getting yourself into if a band says they’re playing Heavy Metal with zero other modifiers attached. Brazilian Heavy Metal stalwarts IGNITED attempt to put their best foot forward with a debut that may appeal to blind Heavy Metal loyalists, but loses itself to stagnant genre clichés and slightly lackluster sound design.

Chug is the name of the game throughout Steelbound and while IGNITED manage to lay down a few decent riffs, the more modern choices on the guitar tone and the mixing of the drums really don't do them any favors. The more aggressive, more distorted guitar sounds decent on sustained power chords, but it loses its luster and starts to sound generally low quality on a good portion of the riffs. Coupling that kind of tone with extremely loud and sharp sounding percussion isn’t exactly my favorite thing since you lose a ton of depth and heft from the chug, so Steelbound fell flat for me in that regard. There are a few songs where it works out, with “Pain”, “Steelbound”, and “Rotting” being written in a way that complements their overall sound. Even though these riffs go hard with the traditional Heavy Metal chug, there isn’t much else there to latch onto apart from the occasional solo, especially since most of their choruses resort to generic power chords in order to support the vocalist.

IGNITED vocalist is worth supporting though since he’s very much the backbone of Steelbound through and through. Denis Lima’s voice has a ton of character as he pulls inspiration from the likes of Judas Priest along with injecting some early Power Metal tendencies shown in the delivery of his higher range notes and overall theatrics. Even though Steelbound fails to have very many memorable or fun choruses, Lima’s performance kept me interested throughout the album apart from one or two duds. “Shining Void” and “Time”, the two ballads of the album, do a fantastic job of showcasing his overall range since he exists in his upper range for almost the rest of the time. Honestly, I’d go so far as to say I’d love to hear Lima on Avantasia; he has a ton of power and range that doesn’t necessarily get utilized to its fullest potential.

As much as I want to say Lima’s performance saves Steelbound, there isn’t much here past the bare minimum of a modern Heavy Metal album. “Living in the Dark” emerged as my clear favorite and I think this song alone shows that IGNITED have some promise since it feels like it fully utilizes Lima to create a memorable chorus alongside the rest of the band. Maybe Steelbound can give Heavy Metal diehards an injection of hope that there are still bands continuing the legacy, but I can’t see myself getting much more out of this one.

On the surface, I understand why bands like Ignited take the safe route and write music that is indebted to traditional heavy metal bands like Judas Priest and Overkill. These are legendary acts with legendary albums; Painkiller and The Years of Decay respectfully, are not just great heavy metal albums, but also some of the best albums of their respective years. And so, it becomes an easy sell for those who grew up with that music, or the younger generation who were educated on the history of metal through these iconic acts.

Steelbound is that with almost no development whatsoever. Most of this album sounds like it could have been written for a late era album by one those bands like Ironbound or Firepower. I don't understand why Ignited play this plainspoken without any development of the sound in question, in order to make it their own. Heavy metal in the most traditional sense of the word has become remarkably stagnant in the last decade, and it's albums like this that prove it.

The songwriting feel formulaic and everything involved in that songwriting is paint by numbers: Denis Lima's belting vocals, the riffing in the guitar feel played out, and the song structures follow very static verse/chorus/bridge/solo formulas. The riffs are okay, the vocals and guitar solos are impressive without becoming over-indulgent, and some of the choruses are fairly catchy. That being said, I once again hear too many similarities to a band like Judas Priest instead of a sound that takes influence and transforms it into something unqiue.

And you know what? All of that could be forgiven if the production was decent. But what we end up with is a lifeless mix in which I wonder if the bass player (Sama Benedet) even had their amplifier turned on. I'm sorry, I cannot forgive "Living in the Dark" for giving the guitar a modest lead, only to find out that there is nothing anchoring that guitar lead in place. Meanwhile, "Roaring Gears" has a rhythm guitar chugging riff that is doubled by the bass boosted kick drum, which is usually my biggest issue with death metal records! The riffs on "Steelbound" and "Ignition" feel like they have been taken right out of a groove metal handbook from fifteen years ago. And the overall tinny guitar tone just puts it over the edge for me. No amount of Rob Halford pipes will save this one!

To me, Steelbound feels like an album that was created by a bunch of dads who could never get into the new trends of traditional heavy metal. So they decided to make an album under the guise of "hey fellow dads! Are you sick of all of these new popular trends in metal? You want something that is old school?" Their description for this album on Bandcamp reads "...straightforward with captivating and powerful songs!" It's straightforward alright! To the point of unrecognizable. Even Judas Priest's worst albums never got this far. You'll be better off sticking to the OG's.

3... 2... 1... "Ignition"!!!! The 40-second intro of this song, and its album Steelbound, made me think of Trivium, with the fast speedy tempo and killer riffing, and it seemed like a reasonable thought...until the high screaming vocals come in to blow me away. As a recent fan of classic heavy metal bands like Accept and Riot, I definitely accept this! Ignited may have their own original heavy metal sound, but each of these 10 songs bring back memories of the power metal bands I used to enjoy. Helping me recall those brighter power metal memories is "Pain", allowing me to take a break from the darkness of gothic metal bands like Type O Negative and Lacuna Coil.

The title track is a kick-A speeder that is one reason why this album is bound closer to me than Riot's Thundersteel. "Living in the Dark" is a mid-tempo march that's slightly darker but still shines bright. "Call Me to Run" will have you running faster than a cheetah on steroids when you're having a morning run. "Times" shows the band going softer and mid-tempo while staying a bit chaotic.

"Ground Pounding" is a mighty pounder, that will have you stomping on the ground harder than a certain Queen anthem. "Shining Void" is another shining highlight that once again brings some of my lighter melodic metal melodies out of the void I've abandoned long ago. "Roaring Gears" is a killer song, in which the gears of instrumentation roar right through and the vocals have mighty power. "Rotting" is the last and longest song of the album at just around 5 minutes, and it kinda recaps some of their influences while staying true to the originality they have.

In conclusion and all honesty, Ignited's Steelbound is a brilliant offering of heavy metal that ignited memories of my epic metal past of the 2010s. It continues to fill my heart to become a heart of a Guardian. This band and album is so underrated and deserves to be heard and supported more. Let the power of heavy metal unite!