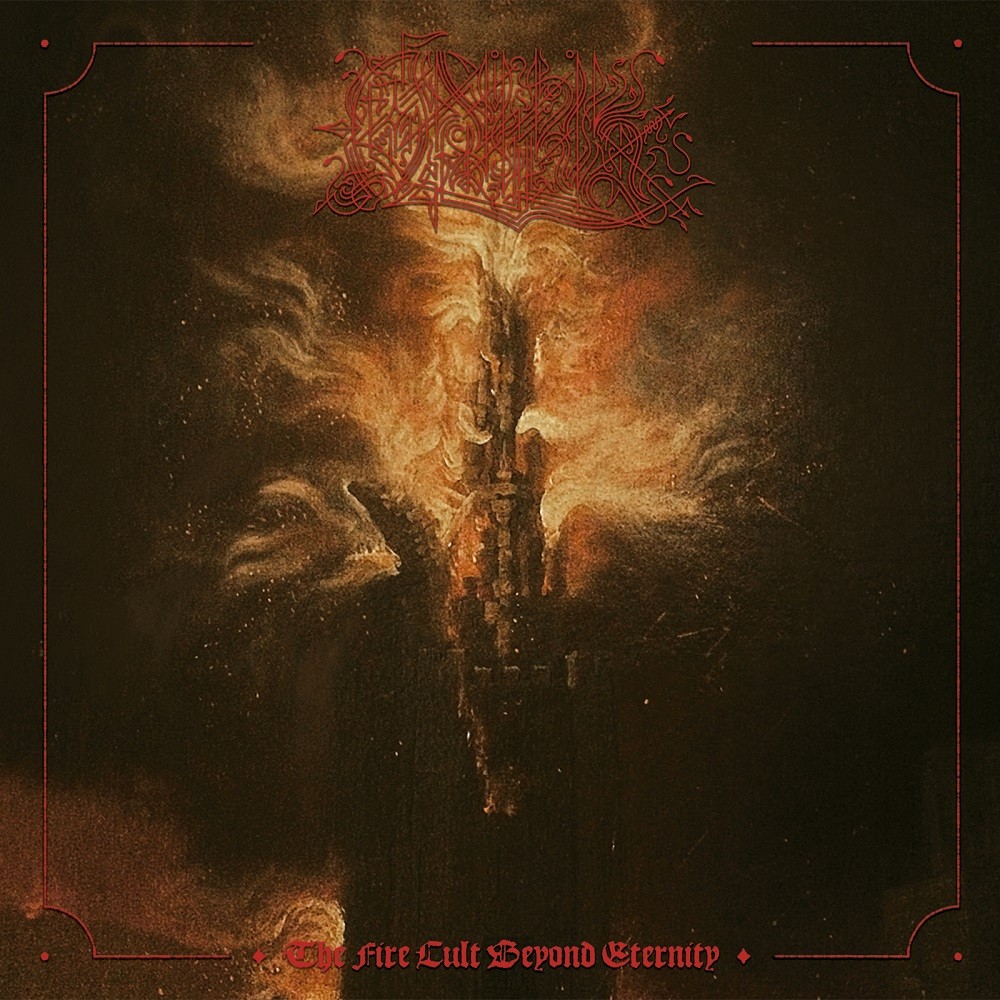 Sounding like Mütiilation had a baby with Ved Buens Ende and produced an offspring that somehow captures the best of both parents, Onirik occupies quite a unique space in black metal.  The Portuguese one man bm project sticks with largely familiar themes on album number five treating us to seven tracks of constantly shifting evil.  However  common the topics of evil, darkness and the occult maybe in black metal, I don't believe there are many artists out there expressing their devotion to such subjects as well as Mr. Gonius Rex is.

The Fire Cult Beyond Eternity is a chaotic, urgent, busy, progressive and melodic affair that offers more than enough kvlt content to appease the most trve of bm fans yet at the same time is able to branch out effortless into territories that would have most die-hards hiding behind their corpse-paint and brass candlestick holders as they try to process just where the fuck each track actually ends up.

An obviously experienced artist, Gonius excels himself here, building complex and arcane structures that morph before your very ears.  There's a constant sense of Onirik running with the very boundaries of black metal cradled in arms not caring where he ends up with it just going gung-ho to push it far and hard.  Better yet, there's no wankery here, no gazey influence to try and turn the heads of the less orthodox crowd.  Only a deaf person (or a complete fucking buffoon) could miss the inherent and intrinsic traits of black metal literally coursing through the veins of this record, yet equally as obvious are the expansive and spacious heights that the melodies of the album soar to and the dizzying spirals of the guitars as they loop like incantated notes through the air.

Come bathe in the glorious darkness (bring your own towels).

Onirik hails from Portugal, hardly known as a hotbed for black metal and is the solo project of one Gonius Rex who has released several reasonably-received albums since 2004 under the moniker. For me, this is my first exposure to the project so I went in having no particular expectations for this latest album. It features seven songs with a total running time of forty-five minutes, the longest, Assigned to the Inexorable Flames, weighing in at nine minutes. Vocally, Gonius Rex goes more for the croaking style of Abbath rather than soul-shredding shrieking and actually sounds very impressive to my ears. Lyrically the themes explored involve the usual dark, occult-based search for forbidden knowledge and experience so intrinsically linked to black metal's core aesthetic - so far, so expected. Musically, it is a bit more ambitious than that however, with a discordant, busy guitar sound that is quite progressive and replaces traditional black metal riffs with a still direct, but more jazz-influenced style. I wouldn't be surprised if Gonius Rex isn't a fan of Robert Fripp or even Frank Zappa! The overall effect is a lightning-in-a-jar exercise in controlled chaos and may either set your head a-spinning or fire up your blood, depending on your state of mind at the time of listening. That said, there is an absolute killer of a riff during Murmurs of the Aging Vessel that any real fan of black metal should lap up.
Overall, this isn't actually the style of black metal I prefer, I am much more of a traditionalist, yet there is something about this album that appeals and I can't help but keep coming back to it and I guess that is the mark of a great album, so I consider this one a winner.