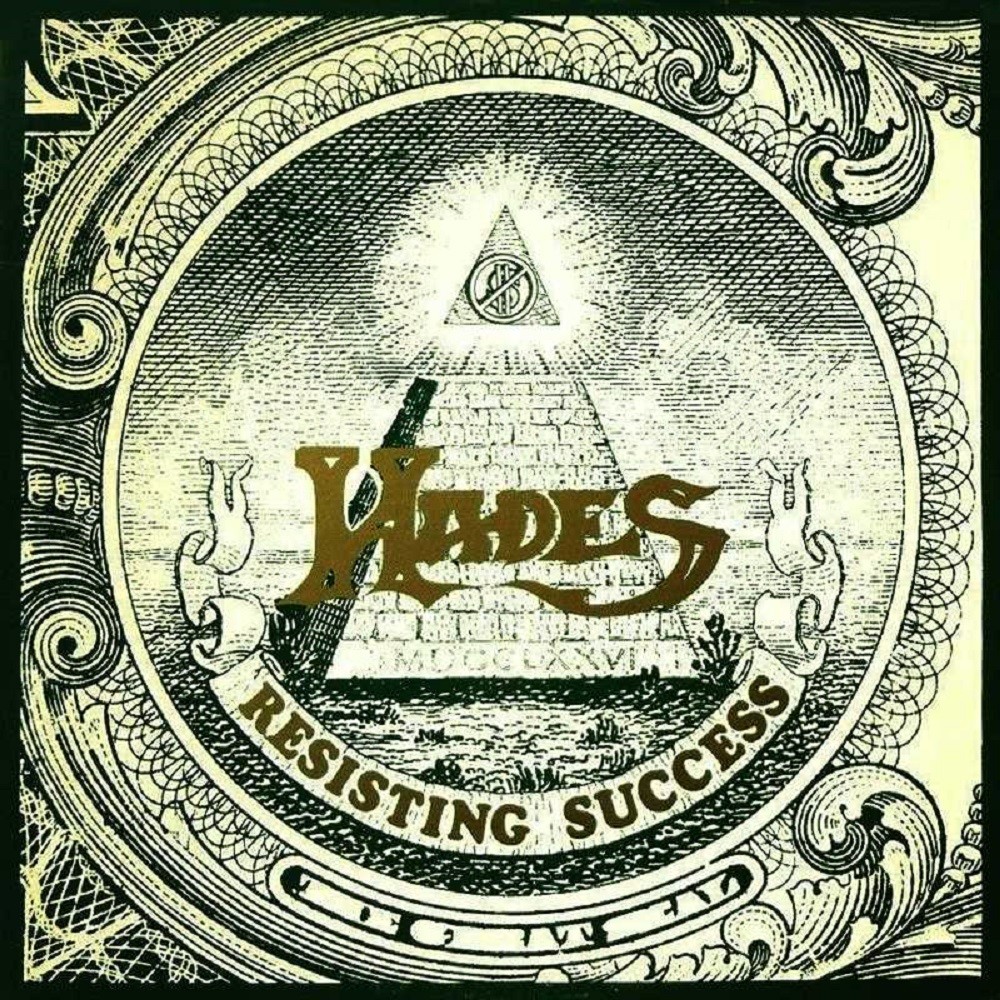 Different bands have very different stories. Some will seemingly go from zero to hero in a matter of a year by getting signed almost immediately & laying down their debut album before they’ve even had time to fully develop while others are much more of a slow burn with a number of false starts along the way. New Jersey thrash metallers Hades fall firmly into the latter category with the band’s story having already spanned a full decade by the time their debut full-length hit the shelves in 1987. In fact, the very first incarnation of Hades was formed way back in January 1978 which would have made them arguably the earliest thrash band in existence if they had in fact been a thrash band at the time. This wasn’t the case however. They were still playing radio-friendly hard rock covers & learning to play their instruments but their dynasty had already begun with guitarist Dan Lorenzo having already selected the band’s moniker in a ninth grade mythology class.

As with so many high school bands, not a lot would happen for a full four years until Hades would find themselves opening for the raw & exciting Twisted Sister who were showcasing their debut “Ruff Cutts” E.P. at the time. This show would prove to be the catalyst for Hades to get more serious with their debut single “Deliver Us From Evil” seeing the light of day shortly afterwards. It was a pretty lackluster affair in my opinion which saw the band pushing more of a traditional heavy metal sound. Live shows would start to flow more regularly at this point however & a couple of cheap demo tapes would soon lead to appearances on the “Metal Massacre VI” & “Born To Metalize” compilations. Vocalist Alan Tecchio, second guitarist Scott LePage & bassist Jimmy Schulman would join the fold in 1985 & another single entitled “The Cross” would follow shortly afterwards in 1986.

It was around this mid-80’s period that Hades would become more interested in the burgeoning thrash metal movement that was taking the world by storm than your reliable old Maiden’s & Priest’s. Main song-writer Dan Lorenzo would become infatuated with Slayer & Exodus’ debut album “Bonded By Blood” & it would see Hades making a significant change in musical direction. The New Jersey thrash scene had a reasonably strong pedigree in the early years of the subgenre with Overkill & Whiplash being amongst the earliest exponents of the sound but Hades would become a part of a second wave of New Jersey thrash bands that included the more extreme Blood Feast & Blessed Death who had recently abandoned their speed metal roots.

Things were heating up for Hades with 1987 proving to be the most important year in the band's story thus far. The interest in their second single had led to them signing a recording contract with US label Torrid Records who had made a name for themselves through Exodus’ legendary 1985 debut album “Bonded By Blood”. Torrid co-founders Ken Adams & Todd Gordon would bring in producer David Blake who had previously worked with Hades on “The Cross” single & the three of them would produce the “Resisting Success” album in collaboration with the band themselves. Adams & Gordon had been enormously successful with their involvement in the production of “Bonded By Blood” so this arrangement boded very well for Hades but I have to admit that the result was a little bit of an anticlimax given just how strong, influential & enduring the production job on Exodus’ debut was, particularly that iconic rhythm guitar tone. “Resisting Success” sounds very much like the third tier underground thrash release that it is & that’s mostly due to a tinny guitar tone that doesn’t manage to fully highlight the strength & energy in the riffs & melodies. The rhythm section sound much better however. Particularly the bass guitar which has received a lot of emphasis in the mix & for good reason. I recently read that Jimmy Schulman asked the engineer to give him a similar sound to Chris Squire from legendary London progressive rockers Yes which makes a lot of sense when you hear the result. Drummer Tom “Agh” Coombs’ kick drum has been allocated a fair amount of high end which gives it a noticeable click but it’s nothing too extreme & the drums are generally well presented. This sort of raw but reasonably adequate production job was par for the course for mid-80’s thrash debuts so I don’t want to be too harsh but I just get the feeling that Hades had a little bit more to offer than is shown to us here.

The cover art for “Resisting Success” is fairly interesting although it’s not exactly in a style the screams of thrash. The medieval looking logo & borders, the Illuminati-style pyramid with the levitating peak, the more subtle album title…. it all seems a little bit more progressive to me & I wouldn’t have been surprised if the music it contained sounded kinda like 70’s prog rock. In fact, there are strong stylistic similarities to the cover art used for the 1979 self-titled debut album from US progressive metal outfit Legend to tell you the truth. Hades music does have a fair bit of sophistication about it at times though & the last couple of tracks offer more than a hint at a progressive influence. Particularly the 9+ minute closer “Masque Of The Red Death” which is a fully fledged progressive metal affair. There’s actually a fair bit of ambition shown for a thrash debut with good complexity throughout the entire tracklisting so I literally felt a penny drop inside my brain when I discovered that Hades had already been around for a decade by this stage. You very rarely see a band having to wait that long to hit the shelves but (in much the same way as the before-mentioned Twisted Sister who formed in 1972) the added experience they’d gained along the way shows pretty obviously here.

Musically, this is definitely a thrash metal album. Sure, Hades may flirt with other subgenres on occasion but their overall sound sees those moments always sounding like a thrash band that’s trying something different. A lot of that has to do with the crunchy guitar tone & chuggy mid-paced riffs which are distinctively thrash oriented but there are a few old demo & single tracks included that give you a very graphic view of the transition that Hades had taken over time. The more emotionally-charged acoustic-led “The Cross” is probably the most obvious example & it’s the only track that I’d describe as fitting better under the classic heavy metal banner than a thrash one although “Sweet Revenge” (another old single track) is somewhat of a hybrid. That’s not to say that the rest of the material is always flat-out however as Hades aren’t afraid to slow things down for the occasional Sabbath-inspired groove riff. In fact, when they’re at their slowest I can hear distinct similarities to Swedish doom masters Candlemass which is probably emphasized by the operatic vocal delivery. I’ve often seen “Resisting Success” linked with speed metal too but apart from the odd riff in opening track “The Leaders?” I don’t really see it. There's certainly fast stuff included here but Hades tend to traverse a wide array of tempos.

The quality of the musicianship is outstanding for a debut album & this is a real strength for the band. Hades make great use of the twin guitar attack with the lead work all proving to be more than capable. I really dig a band that can use guitar harmonies without ever approaching the cheese line but it’s the rhythm section that impresses me most. Tom Coombs’ drumming is always interesting with his array of fills & cymbal work giving Hades’ sound additional freshness. Bassist Jimmy Schulman is the best thing about “Resisting Success” though as he approaches metal bass playing from a far more progressive direction, regularly employing bass chords as well some quite complex licks & solos. He’s a really talented musician in his own right so I’m not overly surprised that the producers have opted to highlight that in the mix.

The other major talking point is the contribution of front man Alan Tecchio whose higher register delivery may not be all that common in thrash circles but proves that this approach can be more than effective when it’s done right. His voice occupies a similar space to Agent Steel’s John Cyriis & Anthrax’s Joey Belladonna a lot of the time &, although he’s not always on the money, he usually manages to get by on charisma alone. Alan is definitely at his best when he gets right up there though & I find those sections to be the most satisfying on the record. See album highlight “Legal Tender” for a great example of that as his soaring screams beautifully compliment some exhilarating riff work that reminds me very much of Megadeth’s “Loved To Death”. My only complaint with Alan is that he does occasionally try to force too many words into his phrasing & it ends up sounding a little bit clunky.

Overall, “Resisting Success” is a pretty good way to kick off a recording career. There are no weak tracks included & there’s an air of professionalism about everything even if the production perhaps doesn’t reflect that as well as it might have. The one negative is that there probably aren’t quite enough highlights to warrant the higher scores. All of this material is of a good quality but it’s rarely great. In saying that though, I;m gonna throw out a big call by saying that I think it was the best thrash debut to come out of New Jersey to the time & that includes Overkill’s “Feel The Fire”. If ythe idea of a sophisticated mid-80's thrash record with higher register clean vocals sounds interesting to you then you could do a lot worse than this.