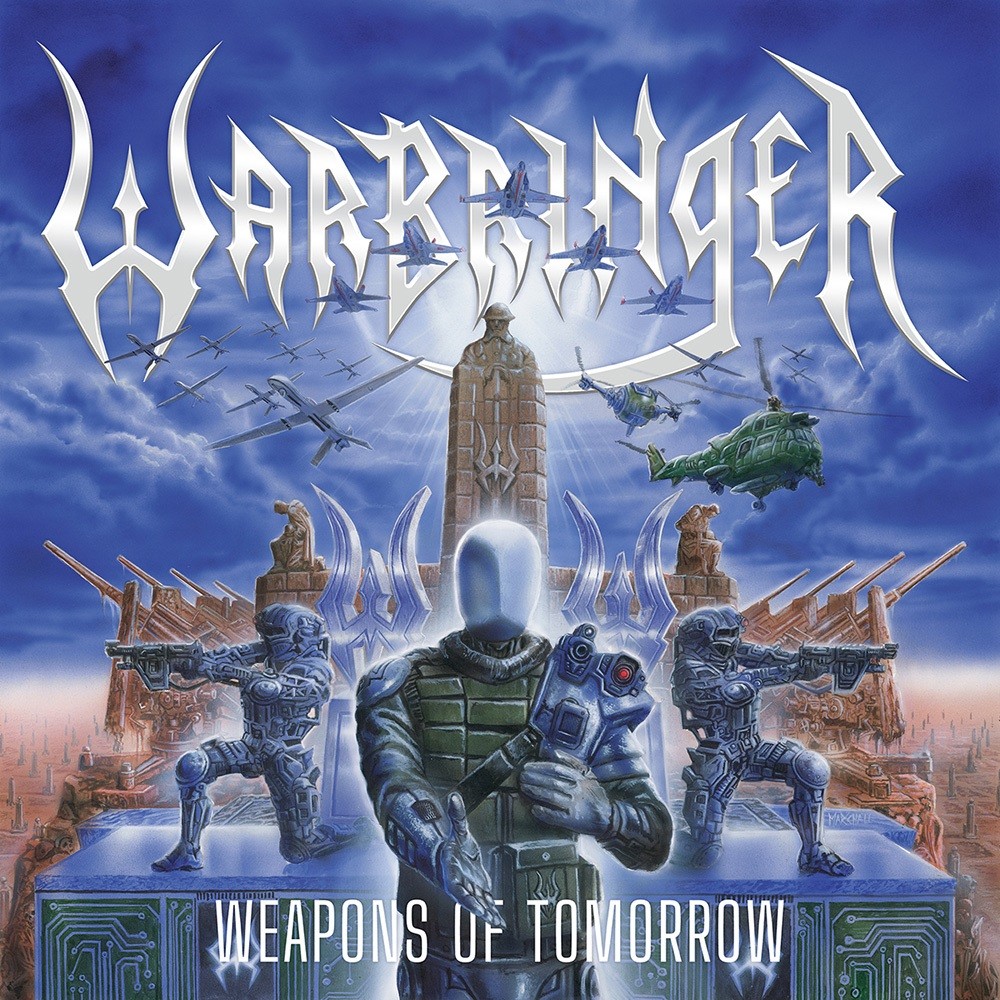 I think it is safe to say that Warbringer have heard their fair share of Demolition Hammer in their time.  Throughout Weapons of Tomorrow I pick up the rabid approach to thrash metal that I hear on Epidemic of Violence or Tortured Existence especially in the vocals of John Kevill.  Likewise there's strong and obvious influences from the likes of Kreator, Exodus and more modern references like Havok.

Now, this isn't to say that Warbringer just regurgitate the old formulas of the aforementioned bands as they do apply their own musical abilities perfectly well throughout their sixth album.  Overall, song structures are solid and vary well in terms of pace and tempo for what is in the most part an in-your-face thrash metal album.  The bands hi-octane, no frills attitude to their art form is consistent across the ten tracks on display here and it is this in the main that I take away from my fifty minutes of time spent with it.

The band push their song writing abilities on occasion with tracks such as Defiance of Hate offering a more subdued approach which gives the track a real sense of build and momentum beyond just ripping intensity.  The lead work is undertaken by a very capable guitarist in the form of Adam Carroll who adds real splashes of colour to tracks when things start to feel a little formulaic.  When at full speed the riff machine is certainly the driving force on Weapons of Tomorrow and when combined with the rampant vocals of Kevill they make for one heck of a pairing.

Lyrically though, the album is poor and frankly needs a lot of work. This is especially apparent due to the focus the vocals have in the mix and their clarity amongst all the component parts make them front and centre for a large percentage of the time.  That having been said, this is a thrash metal album and so doesn't necessarily come with an expectation that Tolstoy wrote the lyrics.  I do have to note however that this is the band's sixth outing and so some level of accomplished lyricism isn't too much to ask I feel.  My only other criticism is that although the song writing has clear merit, tracks do just seem to end all of a sudden like an early edit has occurred before the track has fulfilled its goal. Still solid stuff overall though.

A couple of weeks ago, I brought up the prospect of a thrash metal revival during the late 2000s and has been incredibly prominent in the 2010s in my review of the last Testament album. That observation was made primarily because of album releases by all big four thrash metal bands in a rapid period of time from 2015-16.

As is always the case, there will always be copycats, which brings us to Warbringer. They are a more recent entrant in the thrash revival scene who received some attention from me in 2017 with their album Woe to the Vanquished. I thought it was pretty bland and mostly forgettable. And now with Weapons of Tomorrow, nothing has changed.

I don't know how many times I have to say this, but I'll continue to say it until these bands figure it out: thick rhythm guitars is NOT an excuse for leaving out a prominent bass line! Many of these songs lack any forward momentum without it and the tracks feel like they just keep going without evolution because the guitars are never given the room or space to build upon their foundations. "Heart of Darkness" is the only track that understands this and the shape of that song is rewarding and exciting.

The music itself is pretty lacking in originality. Warbringer are wearing their influences plainly on their sleeves and some of these tunes don't even try to disguise them. "Defiance of Fate" is clearly trying to be "For Whom the Bell Tolls", "Power Unsurpassed" jacks the breakdown riff from Slayer's "Angel of Death" almost identically, while the rest of it sounds like it could be substituted with nearly any Megadeth album with vocals straight from Exodus.

Outside of a couple of decent moments that draw heavier influence from black metal and a pretty good one-two punch to round out the album with "Notre Dame (King of Fools)" and "Glorious End", I've heard a lot of this before. And it comes included with all of the troubles and issues many newer thrash bands have been dealing with for the better part of a decade. Testament have proven that you can have hooks and still make thick music. Maybe these guys should pay more attention to the right people.