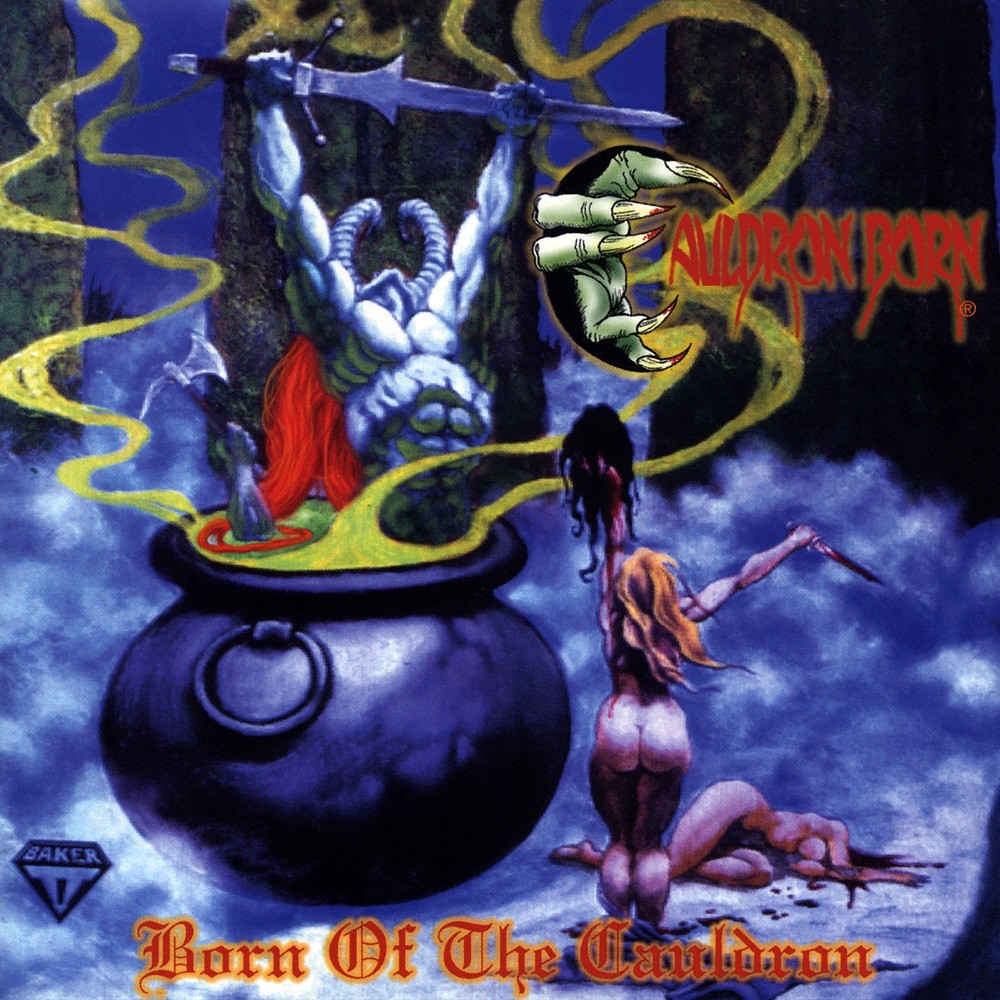 I can cope with clunky and cumbersome. I have listened to enough Autopsy to know that bands can make a reputation based on such basic (and base) values of musicianship. It is part of the allure of some bands but then again there are some genres of metal you can hide it better in than others. What these guys try to do here is borderline criminal though and this was an album made by a band who were way below the level of ability they aspired to.

Given that Power Metal in general is not my preferred branch of The Guardians tree there is a strong argument to say that Cauldron Born are on the back foot before I even press play on the album. Once the music started, they nailed down the lid on their own coffin in all honesty. I have better underground demos in my collection than this record to be perfectly blunt. It is like the band just skipped recording any demos or even spending any quality rehearsal time together to hone their sound and then went straight into the studio to record an album.

Their 1994 demo must be truly awful by comparison if this got recorded for release. There’s already acknowledgement galore on the site that the drums are out of time and the time changes are more like time lurches given their clunky nature, but I think the problem with this album overall is just a complete lack of maturity and accomplishment. Classic example of design over content, they wanted to be technical masters but were about a football field away from being anywhere near competent enough.

I cannot even find any allure for the effort they put in because the failure is still monumental. Barring the vocals which do have their irritating moments also I just find nothing else to even vaguely get along with here.

Born of the Cauldron is a cautionary tale of potential, experimentation, and pushing boundaries. Power Metal, especially US Power Metal, has a tendency to be pretty rigid when it comes to songwriting, riff structure, and overall presentation, leaving smaller, lesser known bands engulfed by the shadows of the classic monoliths like Blind Guardian, Iced Earth, or even groups like Riot. Cauldron Born, hailing from Atlanta, came onto the scene towards the tail end of the initial Power Metal boom with a plan of attempting to distinguish themselves from the rest of the pack in a spectacular fashion. In many ways Born of the Cauldron is more Progressive Metal than Power Metal, with some of the only things keeping it within the realms of Power Metal being the vocal style, the overall tone and mixing of the guitar and bass, and the structure of the choruses. The rest of the album is a flurry of technical songwriting that is overly complex in a way that initially grabbed my attention in a very positive way. It's been a long time since I've heard Power Metal that tried something new and different with Cauldron Born's approach to cram as many transitions and convoluted riffs into every square inch of every song. After some initial listens my opinions of Born of the Cauldron were pretty high since the ballsy, overly technical approach was something I respected and was enjoying.

The overall sound of Cauldron Born sits between a more neoclassical, shreddy kind of Metal and the more traditional US Power Metal sound, one of its defining qualities being the very present bass riffs that support the twists and turns of the guitar as it moves from riff to riff. The vocals follow a pretty standard Power Metal shriek that offer a ton of variety in both range and melody as they're pretty independent from the rest of the band. Most of the tracks off of Born of the Cauldron are high octane riff-fests filled with erratic ideas and aspirational transitions that hang on by a thread most of the time. Tracks like "Imprisoned With the Pharaohs" and "Unholy Sanctuary" slow down a bit and present some more standard chug focused rhythms that let the bass shine through. Although Born of the Cauldron is an extremely dense album I found myself enamored with quite a few standout riffs on "The Final Incantation/In the Dreaming City", "Crusader", and "In Fate's Eye a King", not to mention most of these songs having good hooks for the choruses. As I kept going back to Born of the Cauldron and analyzing it more though, cracks in the armor began to really shine through.

Since Cauldron Born obviously tried to prioritize complex songwriting, it became more and more clear that they bit off way more than they could handle for their debut album. As a non-musician it's hard for me to know whether the band members just weren't adept enough to play their material, or if the material they wrote is just that difficult or complicated. After my first few listens I thought that I was just missing the grooves of some of the riffs, but I think it's objectively clear that there are major mistakes in the performances through and through. It's put me in a really strange spot because I still think I genuinely enjoy a lot of these songs, but the versions of them that would get stuck in my head were very different than what was on the album. I'd be humming the chorus of "Crusader" or "The Sword's Lament" randomly all day, but quickly realized that I was removing all the blemishes from the actual recording in my head. Since Cauldron Born litter their songs with as many transitions and melody shifts as they can, having tight and clean performances is imperative, but that just isn't what's there on this album. The kick drum is pushed far forward in the mix and is sharp, clear, and sadly detrimental because it highlights just how rough of a time their drummer has keeping steady, consistent time. Couple that with complex guitar and bass riffs that fall in and out of time due to how strangely their structured and a vocalist that is off doing his own thing, Born of the Cauldron ends up sounding like more and more of a mess the closer you listen.

I truly believe that this debut would be one of my favorite Power Metal releases if the performances weren't so marred because there's some awesome stuff going on here. I respect Cauldron Born for having the gusto to release something that's much above the band's skill level at the time because it was certainly able to grip me at first given its uniqueness. If some tweaks were made and a bit more practice was done I could only imagine how great Born of the Cauldron could have sounded, but I made an initial rating mistake of what I thought the album was rather than what it actually was. In the end I always want bands to aspire to break free from certain formulas that keep certain Metal genres pretty generic, but this one taught me that an immaculate performance isn't always a given for studio albums.

1997’s “Born Of The Cauldron” debut album from Atlanta-based US power metal outfit Cauldron Born is a very interesting inclusion in our September batch of feature releases as it doesn’t sit all that comfortably alongside its more traditional sounding heavy metal & power metals peers in The Guardians. In fact, it may well have been ostracized from the group & forced to sit & eat in the corner of the lunchroom in complete isolation. The main reason for this is its consciously technical approach that sees it fitting much more comfortably in our The Infinite clan. Fuck knows how it’s not already labelled as progressive metal because this record is about as progressive as you’ll find. I mean this fucker sounds like Yes got blind drunk & decided to become a US power metal band & I think it’s fair to say that the results are very mixed.

I really struggled with “Born Of The Cauldron” to be completely honest. With the exception of some of the ultra-underground & super-necro sounding extreme metal, my background as a musician sees me being quite picky when it comes to performance, execution & musicianship & these are clear weaknesses for Cauldron Born. Despite the fact that the song-writing & composition is extremely ambitious for a debut release, some of the band members aren’t even close to being up to the task at hand & it leaves a lot of this material sounding like a bit of a mess. The secret to writing captivating & impressive progressive metal is to present rhythmically & melodically technical instrumentation & vocal arrangements in a way that flows smoothly & still enables the song-writing to dig its hooks into the listener’s memory bank. In fact, your less technically inclined listener should almost not notice the technique on display & be able to enjoy the music for what it is i.e. actual music rather than a medium for showcasing someone’s talents. Unfortunately, Cauldron Born don’t seem to have any sort of understanding of this requirement & have subsequently presented us with some highly complex compositions that don’t flow & sound very jerky which leaves tracks like “The Sword's Lament” & “In Fate's Eye a King” sounding like a bit of a mess really. This may not have been such an obvious problem if drummer Bill Parsons could play in time however this is unfortunately not the case with his kick drum work being consistently behind the beat & guitarist Howie Bentley regularly struggling to keep in time with him. Howie has his own issues to be fair as he really wants to be a shredding guitar virtuoso but his chops aren’t even close to being able to pull off what he’s attempted here. Thankfully bassist Shawn Kascak is a bit of a star & manages to recover things slightly with his Chris Squire influenced bass lines constantly shifting through run after run of inventive melodic noodling.

Vocalist Danny White is your classic US power metal front man. His operatic style & clear higher register tone sound a lot like virtually every other vocalist from the movement but he has a much more challenging task in front of him than any of his contemporaries. Trying to layer a workable vocal hook over music this rhythmically complex was always going to be immensely challenging & he’s done a reasonable job of it, despite falling in a heap on several occasions due to the lack of fluency in the instrumental performances. And this really does highlight the problem with “Born of the Cauldron” because the best material is clearly aligned with the less complex tracks. Songs like “The Final Incantation / In the Dreaming City” & the doomy closer & album high point “Unholy Sanctuary” are a clear indicator of what could have been achieved if the instrumentalists had stayed within the confines of their technical limitations & focused on writing some strong riffs for Danny to work over. Sadly, there’s not enough of this & I found myself struggling to make much sense of “Born Of The Cauldron” for the most part. There’s no doubt that it’s a consistently interesting experience though & I was sitting on the fence between a 2.5/5 & a 3/5 rating for some time but at the end of the day I can’t deny that the moments when I can honestly say that I’m genuinely enjoying myself are too rare for me to go with the higher score.