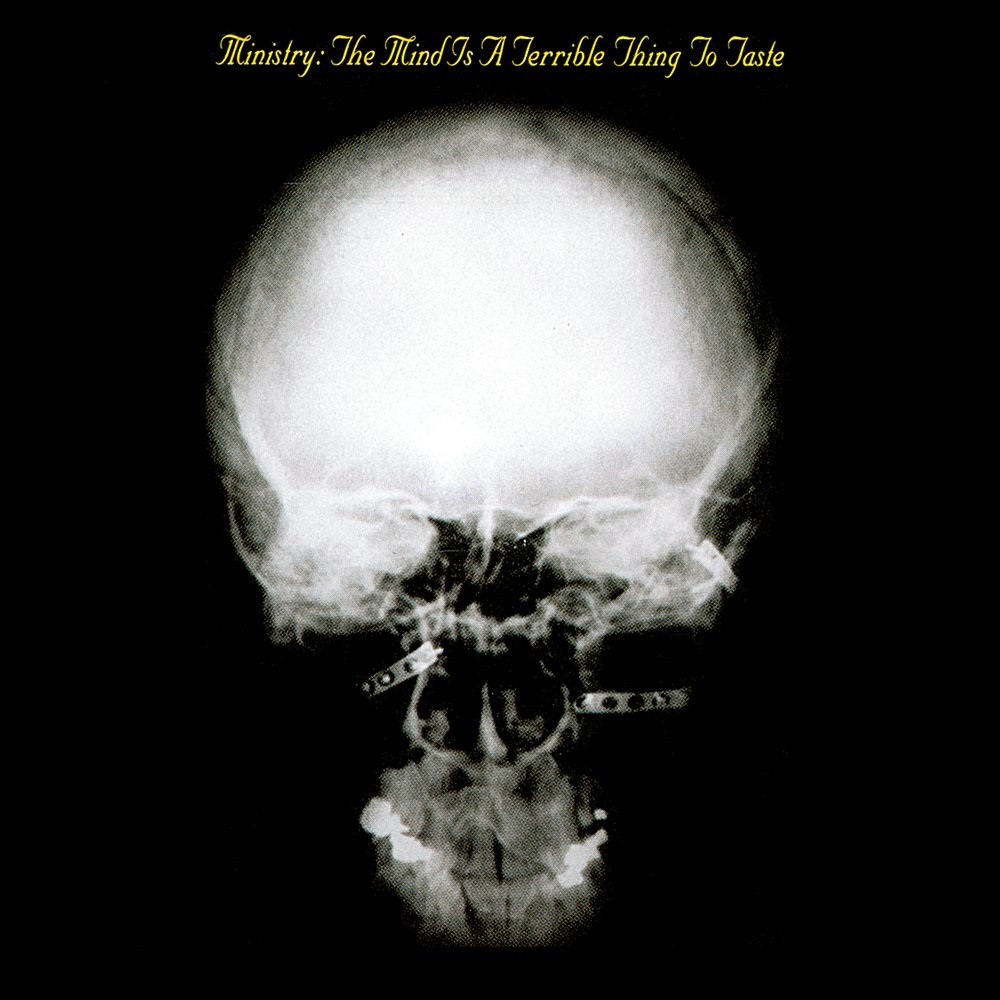 Whilst far from ignorant of the existence of Ministry, I would not class my path with them as being particularly well trodden. Industrial metal has a limited space in my library, and I have found in recent years that the likes of Godflesh have appealed less when revisited some years after the event. The last Ministry release I reviewed was 2018’s AmeriKKKant which was frankly fucking terrible and showed me that Ministry were a mere shadow of their former selves. In revisiting The Mind Is a Terrible Thing to Taste I guess I am checking to see if even their former selves still appeal to me.

What I struggle with, more or less from the instant that the record starts is that rap/spoken word vocal style. It is not unusual in industrial metal (I am not expecting harmonious vocals here folks) but it is one of the things I find grates nowadays when revisiting the genre. The album is far more intriguing for its musical content as it tracks through various layers of darkwave, post-punk and proto-nu-metal. The interest in the music is a nice distraction from the vocals and their strained and at times maniacal chants that they seem to intermittently reach levels of crescendo with.

The best example of this is probably Cannibal Song. It has a monotonous bass line and overly simplistic beat from start to finish with some almost psychedelic atmospherics thrown in and the repetition of the track is very soothing in a sultry and brooding way. The vocals are almost like interference on this track, like you have caught two radio stations playing at once with the signal for one being stronger than the other. I find my enjoyment levels of The Mind… are higher on tracks where Al is not at the forefront of proceedings or as dominating in sections at least.

The track that follows (Breathe) is an example of where this imbalance is at cost to my engagement with the record. It has a much stronger percussive element, with the tribal drumming leading the charge firmly on that front. However, the repetition of those shouted vocals just detracts away from the music too much and I switch off.

The other aspect to The Mind… that I find dominant is how meandering it is. At times it goes beyond the comfort of repetition and strays far into territory where reiteration becomes procedural and the initial serpentine qualities of a track are somehow caught in a seemingly endless lane of one-way traffic with no slip roads or turn offs insight. Since the album lacks any true industrial punishment levels to appeal to my extreme sensibilities, I get bored of The Mind… quickly. There are no events that shake my attention back to it at any point, no moments in it where I can hold hope for a more intense experience. Instead, I get directionless rap tracks (Test) that go on for what feels like forever and I am left frustrated and thumbing through my library for something else to listen to.

Before I ever found this site, I didn't know jack-squat-and-pop about industrial metal and The Sphere. All I knew was a bit of Rammstein and one song from Ministry, and I only heard of Godflesh when people say that's the first band to truly be industrial metal. Now with all these DIS vs. DAT debates going on in The Sphere, I get to try a few industrial metal albums like a cooking show judge. The lyrics still attack politics, but this album is in the Reagan era and is inspired by the "Just Say No to Drugs" campaign.

The Mind is a Terrible Thing to Taste has left a different impression in my young mind compared to the other album I've reviewed. Back then, electronic madness and guitar aggression were an innovative combo. This album is tied with Godflesh's Streetcleaner as the spawn of industrial, though Godflesh's debut gets more credit.

"Thieves" starts with a hyper guitar riff over a dance beat, then the verse has Al Jourgensen's distorted screams of "THIEVES AND LIARS!! MURDERERS!!! HYPOCRITES AND B****RDS!!!!" Then the chorus stops for a stretched guitar chord until one more scream of "THIEVES!!! LIARS!!!" Then the drums go full-on thrash, but they should used real drums instead of programming. I'm guessing they couldn't find any drummers going that fast. After an ambient intro, "Burning Inside" kicks in a propulsive beat and repetitive guitar to keep you awake. This pounding tune is helped out by the vocals. When I wrote this review after waking up this morning, this song fired me up way more than coffee! "Never Believe" is another industrial machine, this time Chris Connelly on lead vocals for deranged ambient assembly. This is still worth headbanging until your head falls off!

"Cannibal Song" has some laid-back saxophone without ever going mellow. The disturbing vibe is helped out by Chris Connelly doing lead vocals one more time. "Breathe" returns to the Jourgensen-sung madness of the first two tracks, this time deliberately more intense! It takes your detached head and slam-dunks it back between your d*mn shoulders, caused by driving drums and vocals repeatedly telling you to "BREATHE!!! ...YOU F***ER!!" Then the song tears your head off again like a fish in the kitchen. One of the best here! "So What" is more than a 8-minute song, it's an anthem with harmonic guitars and catchy bass as Jourgensen declares, "So what!? it's your own problem to learn to live with. Destroy us! Or make us saints!! WE DON'T CARE!!! IT'S NOT OUR FAULT THAT WE WERE BORN TOO LATE!!!!" This song of the generation's apathy will get you screaming/singing along to an anthem that's unlike any other.

If "Test" was a test on a different style, they failed that one. It's just a weak rap track with uninspired verses and none of Jourgensen's screaming. WHY IS THERE ALWAYS SOMETHING HIP-HOP!?! Fortunately, "Faith Collapsing" is the second anthem of this album with great bass, tribal-ish drums, and the only lyrics besides all those weird soundbites and samples is a repeating chant of "FAITH COLLAPSING!!!!!" Another weak track "Dream Song" which is an awful way to close the album. I'm not even gonna describe it, another than the narration sounding like a wet dream. They should've taken out that sh*tty track and "Test", leaving "Faith Collapsing" as the 7th and last song.

The Mind is a...revolution starter for a different metal genre that is industrial metal, alongside Godflesh's Streetcleaner, to inspire bands like Fear Factory and Rammstein. I suppose I could one day listen to its developing predecessor, but for this album, this is for industrial metal fans who want their head tossed around. Otherwise, look out!

Favorites: "Thieves", "Burning Inside", "Breathe", "So What", "Faith Collapsing"