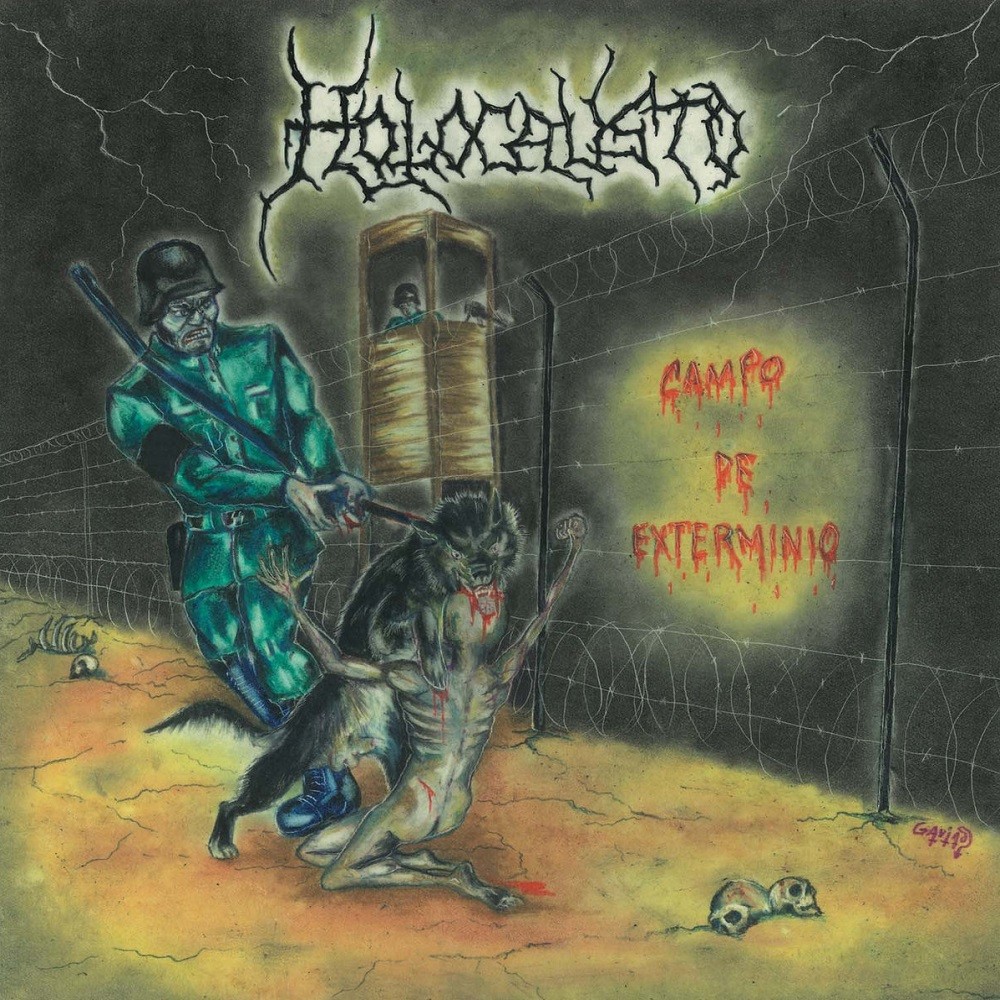 By the mid-to-late 1980's, the Brazilian city of Belo Horizante had become a small hub of activity for young bands with an appetite for increasingly extreme music; presumably being encouraged by 1985’s split album from local heroes Sepultura & Overdose as well as Sepultura’s 1986 full-length debut “Morbid Visions”. This would see 1987 becoming an important year in the development of the local scene with the next wave of bands graduating to full release status in quick succession. Amongst the pack were several key performers in Sarcofago, Mutilator, Chakal, Exterminator & the subject of today’s review, Holocausto.

So ya know the old phrase that says that you can’t judge a book by its cover? Well it’s fucking lucky that this is generally accepted to be the case because I don’t imagine the cover art for Holocausto’s debut studio album “Campo de exterminio” would instill too much confidence within the context of a modern metal marketplace now, would it? I mean deciding you’ll go with that sort of moniker & then calling your record “Extermination Camp” & putting a picture of a Nazi soldier setting a vicious dog onto a naked & clearly emaciated civilian isn’t exactly something that people would commonly accept these days now, is it? Not to mention the two-minute intro track which samples historical Nazi recordings. But in a way it was a fine representation of just how few fucks Brazil’s extreme metal underground gave back in the 80’s. There didn’t seem to be any rules whatsoever & that is very well illustrated by the music this sleeve contains within too.

Now any Brazilian extreme metal release simply MUST possess a couple of key attributes & the first is a production job that sounds like it was recorded with a handheld Dictaphone & this is certainly true with “Campo de exterminio” but perhaps not to the extent that people seem to make out. Maybe it’s just that I’m revisiting this release through the digitally remastered version that’s available on Spotify (which also includes the bonus track “Massacre” which seems to be a precursor for the war metal subgenre) but I can’t say that I find it terribly easy to match up the online consensus that this is amongst the worst of the worst with the product that’s reached my ears this week. Sure, it’s raw as hell & sounds like a cheap demo tape but it’s not unlistenable by any stretch of the imagination. As is quite often the case with Brazilian death/thrash, the guitars are mixed too low & the drums do their very best to drown out the rest of the instruments but I find that I can make out the riffs most of the time & that’s no mean feat given the messy guitar sound. I mean if there’s one element that gives “Campe de exterminio” its necro feel it’s that ultra-ugly guitar tone which ensures that it’s pretty much impossible for single axeman Valério "Exterminator" to present the results of his toil in anything close to a tidy fashion. If you’ve already conquered the guitar tone on the early Hellhammer & Sodom recordings & are looking for your next challenge then perhaps this might be just the sort of thing you’re looking for i.e. a rhythm guitar tone that would see even the most skilled champions of their instrument struggling to lay down even the slightest hint at complexity.

The second key characteristic of any underground Brazilian death/thrash metal release is a very basic level of musicianship & once again “Campo de exterminio” is often highlighted as being on the more extreme end of the spectrum in this regard. Look I’m not saying that it’s not warranted but perhaps not for the same reasons as most people seem to think. I mean unlike Belo Horizante locals Exterminator, Holocausto do have the physical skills to perform at a reasonable level but this is often obscured by the fact that they appear to have received absolutely no theoretical training. To elaborate a bit on that point, the drum beats employed by Armando "Nuclear Soldier" are reasonably performed & are generally quite powerful however the riffs that they’re accompanying often have no correlation to them whatsoever so you’ll regularly find yourself wondering how the band members ever thought they’d work together. There’s probably not a song on the tracklisting that doesn’t include a riff that makes no sense from a rhythmic point of view & despite coming up with some pretty brutal riffs at times, it's very clear that Valério has never been taught how to count his beats through in his head. It’s actually a miracle that the whole thing doesn’t fall into complete mush a lot more than it does & it’s often up to front man Rodrigo "Führer" to help keep the rhythm of the riffs together through the use of his phrasing. In fact, I’m not even sure how he manages to stay in time himself to be honest so it’s a significant problem that’s been majorly impacted on by the muddy guitar tone which makes it almost impossible to produce a precise performance. Valério’s incompetent use of palm-muting is also a contributing factor though it must be said & it’s left up to Armando to try to hide his deficiencies.

“Campo de exterminio” is generally regarded as sitting somewhere between thrash metal & death metal however I’d argue that this is a legitimate death metal release with Holocausto’s sound being an amalgamation of Sarcofago, early Sepultura & the first couple of Sodom releases. Despite what you may read, there’s not many references to black metal included although the slower sections were almost certainly inspired by Hellhammer & there’s a noticeable hardcore punk streak to a lot of the more brutal tracks included. I think there’s really only one track where I find Holocausto working from a predominantly thrash metal palate (see “Vietna”) with the rest of the tracklisting sporting blast beats, death grunts & frantic tremolo-picked solos. The grim death metal atmosphere is definitely there & that’s the main source of appeal for an old school death metal fanatic like myself. In fact, it makes me really try hard to like this record even when the obstacles are blaringly obvious. Armando’s vocal delivery is a definite positive though & I really enjoy what was a particularly brutal performance for the time with the obvious reference point being the early efforts of Sepultura’s Max Cavalera. Armando’s holocaust-related lyrical themes are not exactly your standard grisly gore-ridden death metal fodder however they’re delivered in Portuguese so I don’t understand them &, given the subject matter, perhaps it’s better that way anyway.

To be honest, I can’t help but be a little disappointed that I haven’t been able to get myself over the line with “Campo de exterminio”. Given my background, I would have thought I was as likely as anyone to be able to get into this ultra-raw & super-primitive South American stuff but the lack of structure & cohesion in the riffs has proven to be too great an obstacle for me so I only end up enjoying about half of the tracklisting. Still… I’d take this record over the Exterminator, Vulcano & Chakal’s releases from the same period so it isn’t the worst example of Brazilian extreme metal I’ve ever heard but my lack of enthusiasm for it has meant that I’ve never considered checking out Holocausto’s other albums & that’s unlikely to change any time soon.

For fans of: Sarcofago, Vulcano & the first couple of Sepultura releases.